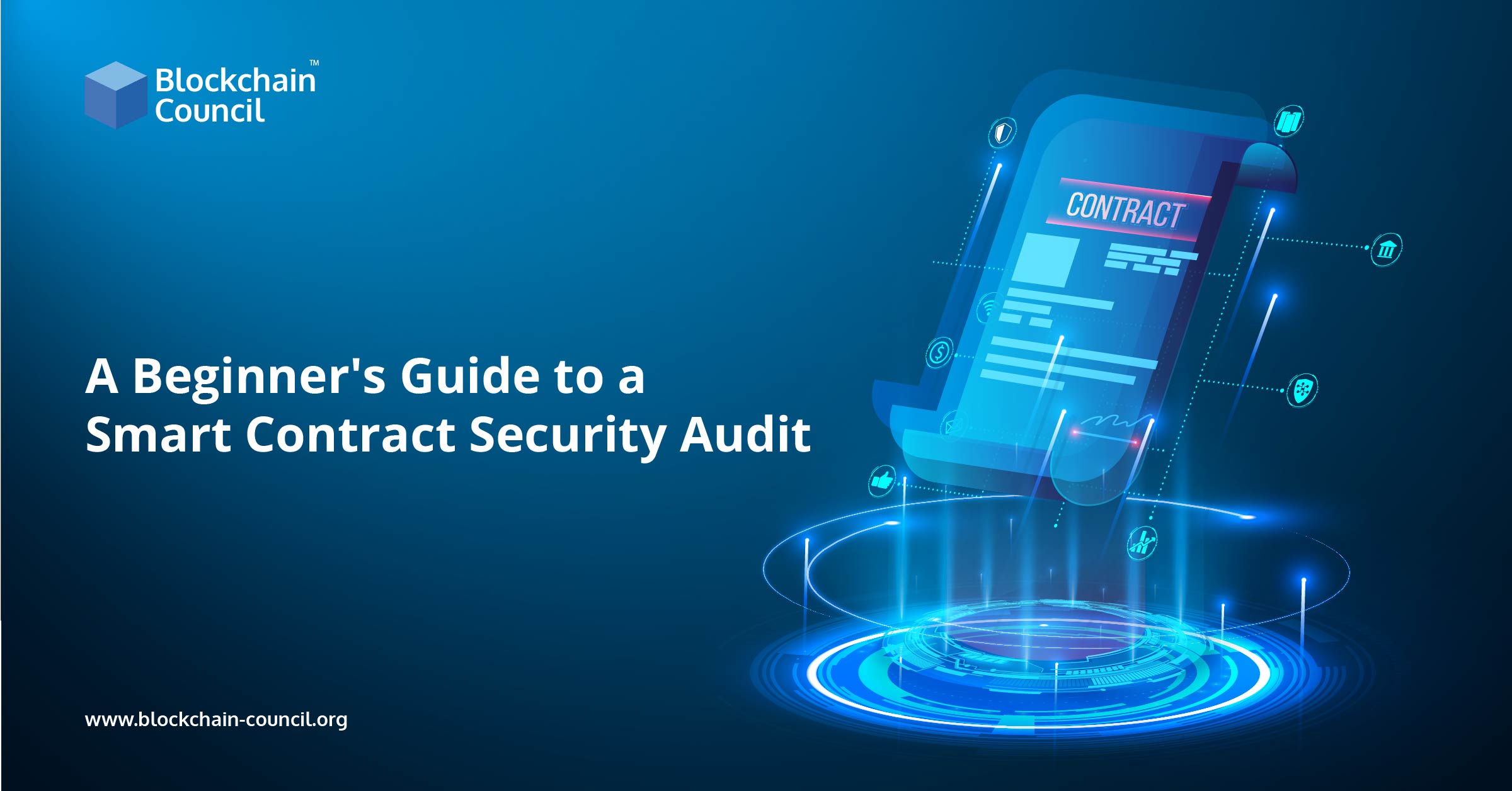 The smart contracts in a project may undergo a thorough examination as part of a security assessment. These secure the money placed in them.

In most cases, smart contract auditors will evaluate the code and generate a report that the project may use. After that, a final report is made public, including any faults that need to be corrected as well as the progress made in resolving any performance or security concerns.

What Do You Mean by Smart Contract Security Audits?

Security audits of smart contracts are prevalent in the Decentralized Finance ecosystem. As a result, it’s possible that the smart contract code review findings may influence your choice to invest in a blockchain startup.

Most people recognize the need for audits when it comes to cybersecurity, but few get into coding. So let’s look at the methodologies, tools, and outcomes often observed in smart contract security audits to make better selections.

The code of a smart contract developer is examined and critiqued by a security audit. They are often developed in Solidity and made available on GitHub. DeFi initiatives that aim to handle blockchain transactions worth millions of dollars or a large number of participants benefit greatly from security assessments. There are typically four stages to an audit:

When investing in new DeFi ventures, smart contract audits are a must for many crypto consumers, and you must learn how to become a smart audit developer. Those that wish to be considered seriously have adopted it as a norm. In addition, investors place a higher value on audits performed by some companies because of their status as industry leaders.

Why Do We Need Smart Contract Audits?

Because of the irreversibility of blockchain transactions, it is critical that a project’s code be safe. Furthermore, because of the difficulty in recovering cash and resolving difficulties that may have arisen due to the high level of security provided by blockchain technology, it is always preferable to avoid any potential weaknesses.

How Do Smart Contract Audits Work?

Understanding the working mechanics of smart contract audits, we will dive deep. Here is a detailed explanation:

There are a few things to keep in mind while using whitepapers and docstrings to explain code. These are not substitutes for well-documented specifications, though. Without a specification, auditors would have no clue what the code was supposed to do or how it really worked in practice. Therefore, an audit of a smart contract must begin with the project’s specification in its entirety.

The auditors would also be looking for the moment of “code freeze,” which would indicate the code finalization at a particular time. When the smart contract code is “frozen,” it must be at its final draft stage. In addition, the code must have been thoroughly checked by the developers to ensure that there are no inconsistencies or flaws.

The final commit hash would also be included in the project specification to ensure that the auditors and developers are on the same page about the code being audited. In order to pass the audit, developers must guarantee that no modifications will be made beyond the ‘code freeze’ point.

Smart contract auditing allows you to get right into the testing phase. Testing is a crucial component in increasing the audit cost of a smart contract. Simple and quick bug discovery methods are also available via testing. Many solutions are available, including unit tests that concentrate on specific functions and integration tests that examine the whole code.

The number of issues that may be readily fixed may be reduced as a result of better testing coverage. In addition, testing lets developers confirm that a smart contract project has the needed functionality and performance. Finally, smart contract auditors may get extra insight into projected project functionality from the informal documentation provided by testing.

Running a test suite is the most straightforward and most appropriate stage in an audit for testing. Finding apparent flaws is more difficult when the code passes the vast majority of tests that are run on it. On the other side, auditors would engage with developers to determine whether they were aware of the failing tests. The audit process should be halted and significant codebase revisions introduced if there are a significant number of failed tests.

Line coverage is a crucial consideration when doing smart contract audits. Auditors must inspect the amount of code that is being evaluated by tests in order to determine the test line coverage. An increase in the number of tested features might lead to discovering previously undiscovered vulnerabilities and faults. Therefore, there is a lot of emphasis on ensuring that every single line of code is covered. However, 85% to 90% of the contract lines are covered for most projects.

Once you’ve completed the testing phase, you’ll likely move on to the analytical phase of the audit. In recent years, the need for safe, smart contract codes has grown significantly. As a result, the need for bug-detection software is on the rise.

It’s common for many symbolic execution tools to concentrate on the most common security flaws in Solidity smart contracts. Analysis tools may assess a program to identify the inputs that activate each portion of the program. As a result of the use of automated analytical tools in smart contract auditing, a more efficient audit procedure is possible.

Additionally, they may help eliminate the need for human auditors while also speeding up the audit process. It’s easier to concentrate on new and more difficult threats thanks to automated analysis.

Automated analysis tools, on the other hand, lack the ability to understand the context in which a piece of code was written. Consequently, such instruments may also commonly produce false positives and inaccurately assert the presence of problems. Thus, when a vulnerability has been discovered, you will need to do a manual study of the issue.

Smart contract audits benefit significantly from the use of automated analytical techniques. Using these, typical smart contract flaws may be easily identified. Auditors, on the other hand, have a hard time comprehending what smart contract developers are trying to do. As a result, when it comes to smart contract code vulnerabilities, human examination is the only way to find them.

A skilled auditing team examines a project’s specifications to ensure that they meet the required functional requirements. In addition, the smart contract auditors may provide the smart contract project team with solid suggestions for improvement based on their observations.

Creating an audit report is the last stage in smart contract auditing. Testing, automatic analysis, and human evaluation should all result in a comprehensive audit report. Finally, the audit team and the project team should meet to discuss the report’s findings. With the aid of this conversation, project managers and developers may better grasp the problems and smart contract vulnerabilities that the audit team identified.

No, smart contract audits aren’t only about ensuring the security of the smart contracts themselves. Efficiency and optimization are also important considerations. In order to fulfill their purpose, specific contracts need a long list of transactions. Therefore, using efficient contracts on networks like Ethereum may save a significant amount of money in transaction fees.

The developer’s ability to optimize their performance is also a sign of their expertise. Avoiding inefficient actions will reduce the number of possible sites of failure. For example, it is possible for smart contracts to fail if the gas limit is set too low.

The majority of audit work consists of looking for security flaws in contracts. However, even while some problems are apparent, many attacks need sophisticated approaches and plans to steal money. Flash loan assaults, for example, may take advantage of market manipulation and weak smart contracts. Therefore, the auditors begin the break testing procedure by simulating malicious assaults on the smart contract. The following are some of the most common:

After completing an arithmetic operation, an integer overflow or underflow happens when the result exceeds the storage limit (usually 18 decimal places). As a result, the numbers you’re working with may be off.

It’s possible to get a head start on the market by analyzing poorly written code. This, in turn, allows others to profit from the knowledge.

How Much Does A Smart Audit Contract Cost?

How much an audit will cost depends on the number of smart contracts to be audited. The conclusion of an unbreakable agreement with predetermined ground conditions is made simpler by using smart contracts. Despite this, a large number of businesses are beginning to experiment with innovative technology for a variety of reasons.

These businesses want to reap the advantages of being among the first to adopt blockchain to their specific requirements and provide improved services to their clientele.

On the other hand, creating a smart contract is not a remarkably inexpensive endeavor, as its cost may range anywhere from 7,000 USD for a simple, smart contract to 45,000 USD for a sophisticated one. When smart contracts are produced for big enterprises that demand a focused focus on their development, the price may reach a maximum of one hundred thousand US dollars.

Moreover, the implementation of smart contracts on the mainnet is not included in this pricing, which means that the final work price may be much more.

As a result, smart contract audits have become a regular practice for investors and users. If you have one, it’s no longer a sign of worth when it’s present in every project. As a result, reading the audit yourself is critical. The remarks and severity of possible problems might be beneficial even if you lack technical skills.

At the very least, you should now be able to decipher an audit’s contents. Remember to always look at the big picture while making an investment choice and to consider all available facts.

If you are wondering how to become a smart contract developer, then you are at the right place. Blockchain Council offers some of the best smart contract courses. These courses are extensively designed and are economical too. You can choose the course that best suits you.