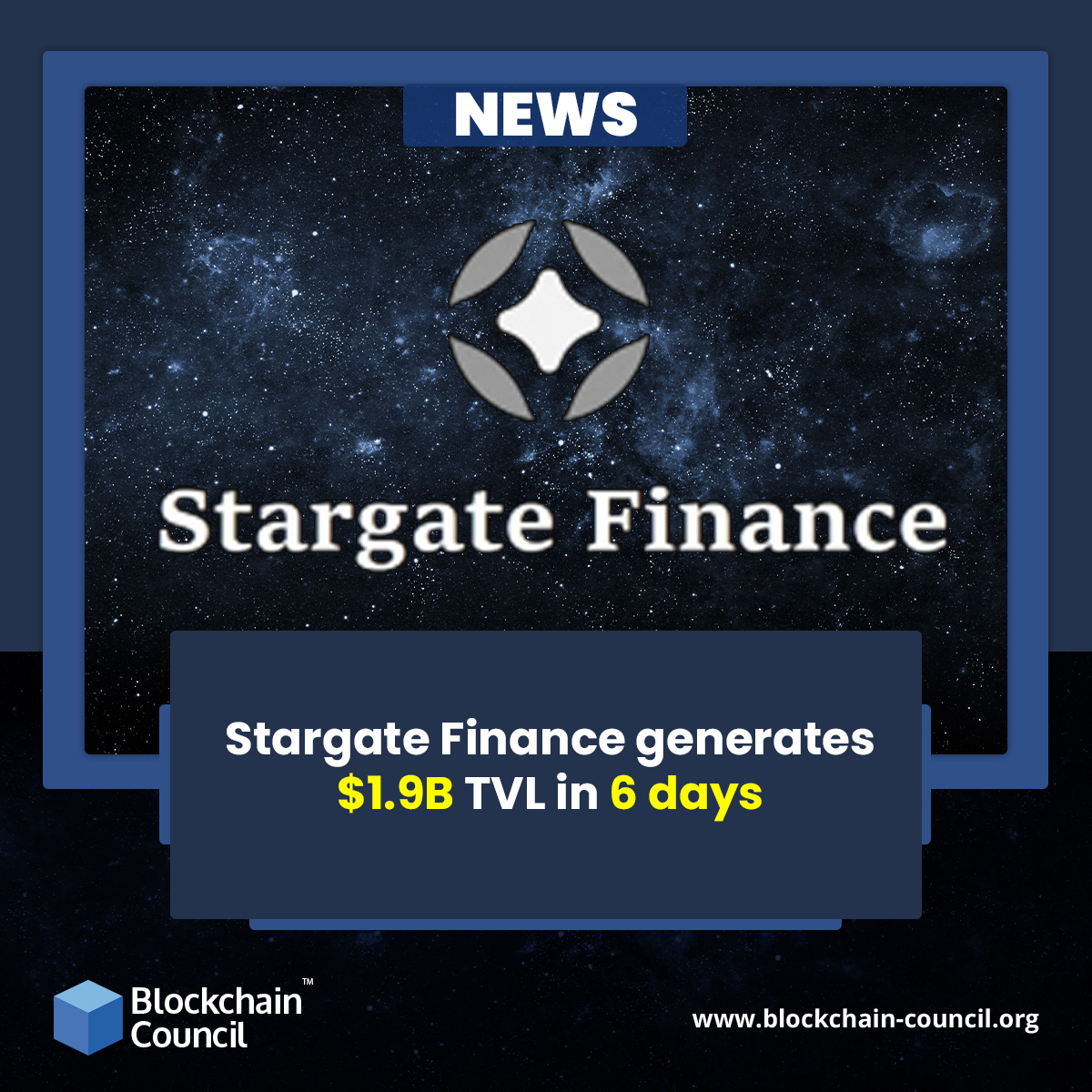 Thriving as a reliable cross-chain protocol facilitating the movement of assets across multiple blockchain ecosystems, Stargate Finance has startled the industry with its latest victory. In a week’s span post its launch, the platform has managed to pool a whopping amount of $1.9 billion in Total Value Locked or TVL charts. With this, Stargate Finance has proved its strong presence in the fast-developing blockchain sphere where firms strive to take an edge against their competitors at each step.

Stargate works as a liquidity transfer protocol that facilitates the safe and secure transfer of assets between blockchain networks. The infrastructure is designed to help decentralized finance investors to stake their stablecoin holdings in dedicated pools in return for Stargate’s native currency STG in their credit. The latest achievement by the firm in terms of TVL volume has brought Stargate in the list of Top10 DeFi platforms available in the burgeoning market space. The surging TVL is likely down to the ‘up to 26% APY’ being provided for farming stablecoin tokens.

There's been some chatter about the recent @StargateFinance auction, and I wanted to clarify a few things about Alameda's involvement.

The CEO of the Alameda Research platform Sam Trabucco has emerged as one of the most reputed supporters of the Stargate ecosystem. In his Twitter post, Sam revealed that his team has bought all the STG tokens offered during the auction sale on the project’s launch event that took place on March 17, 2022. The spearhead has a strong Twitter community of 150,000 followers. His support for Stargate Finance has helped the latter to gain momentum in the sector and thus played a significant role in bringing the TVL to such an amazing figure in a very short span.

The data released by LayerZero revealed that the auction sale involved 10% of the total supply of STG tokens equivalent to 100 million in number. The sale helped the firm to expand liquidity across the seven blockchain channels that Stargate is planning to get launched on. LayerZero is the powerful protocol that supports the Stargate ecosystem. It presents itself as a revolutionary interoperable solution for meeting the requirements of the users.

The Co-founder and CTO of LayerZero, Ryan Zarick said that Stargate strives to resolve the bridging trilemma issue via unified liquidity channels across multiple chains. It executes transactions swiftly and facilitates cross-chain swaps with virtual assets in a decentralized structure. The platform works to offer seamless transfer of assets between blockchain systems via a single trade. The users can indulge in blockchain transfers without undergoing rigorous procedures like minting, locking, burning, and redeeming of assets prevalent in the present environment.

LayerZero has hired the co-founder of SushiSwap, Maki to chair business development operations at Stargate. The Stargate protocol is running live on Ethereum, Polygon, Arbitrum, BSC, Avalanche, Fantom, and Optimism. The team is looking forward to including support for other channels like Solana, Terra, Cosmos, etc. in the future.

If you want to learn the basics of cryptocurrency and blockchain technology, then Blockchain Council’s certificate courses are there to help you. These courses are designed by experts to offer detailed information on each and every core concept of the sector.