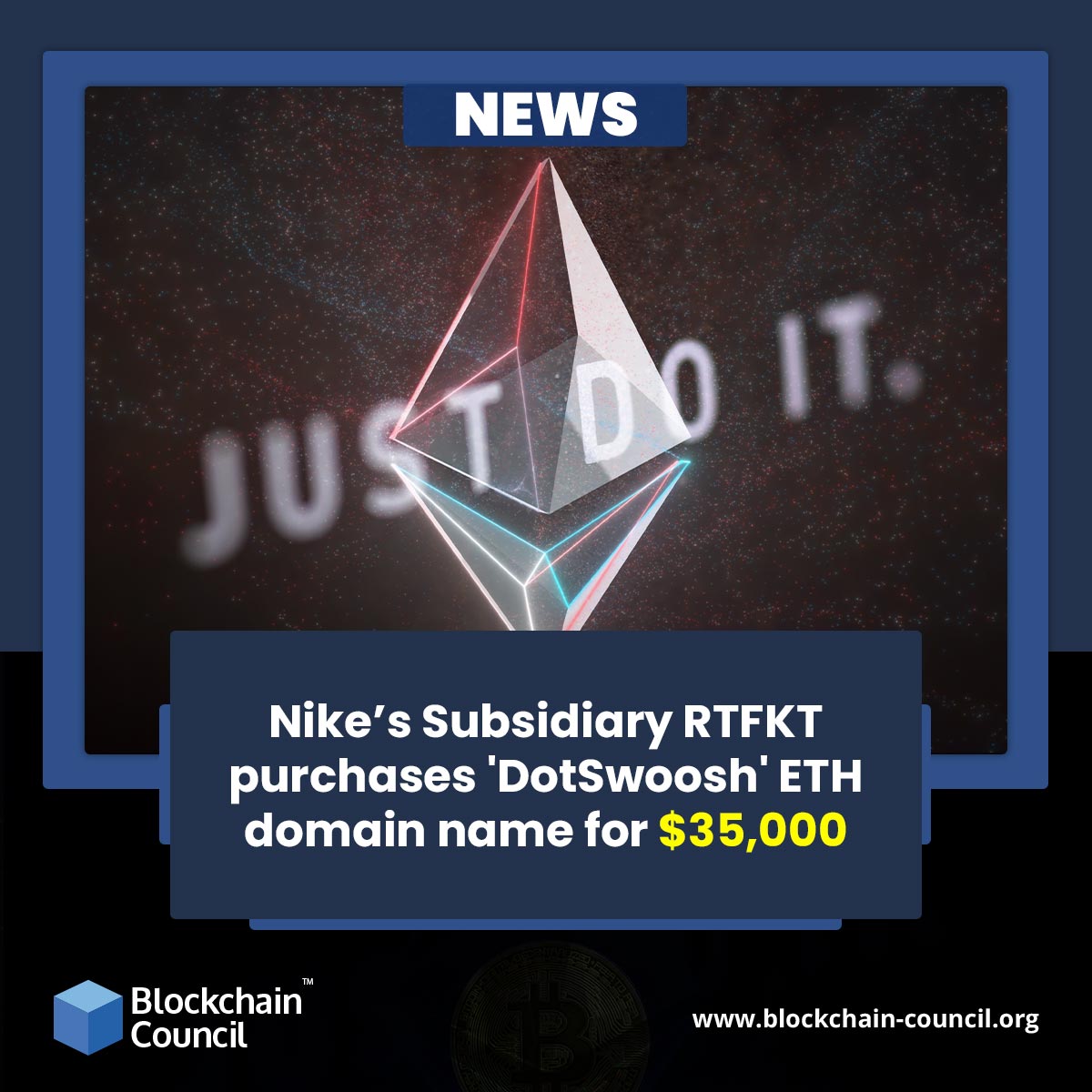 The rationale for Nike’s dotswoosh acquisition on Friday (27-05-2022) is yet unknown. Some of the anonymous reports say Nike may be preparing to utilize the domain to sell items.  ENS subdomains in the future subdomains The principal domain holder owns these domain names.

The sportswear company Nike has announced that it would buy RTFKT in December 2021. It’s a digital design firm that creates sneakers and other items that can be worn in a variety of online settings.

As mentioned above Rtfkt, a two-year-old company, was taken by Nike in December 2021. The price at which Nike purchased it remains undercover. Nike purchases it with the intention of bringing with it a small crew and a strong NFT fan base. Nike, Inc. president and CEO John Donahoe praised the platform’s “next-generation collectibles that mix culture and gaming,”. He also said it allowed the firm to serve artists at the “intersection of sport, creativity, gaming, and culture.”

Nike, for example, may allow owners of specific things to register with the company.  Carolyn Davidson, a graphic designer, is said to have only been paid $35 for creating Nike’s distinctive swoosh emblem in 1971. As a result, Nike’s acquisition price of 19.72 ETH might be a homage to the year 1972, when Davidson’s swoosh insignia first debuted on shoes.

Based on its existing positions, Nike’s ENS moves appear to be part of a bigger plan.  There is an NFT which may be burnt to generate a unique CloneX avatar NFT. They are originally called ad CloneX Mint Vial Ethereum Non-fungible token, and also referred with the name Mint Vial.

There is something called Nike’s Space Drift Non-Fungible token. They are the form of digital shoe NFT. This allows the possessor to “create” a physical replica of the sneakers. That replica is often referred to as Space Drip.RTFKT’s Skin Vials are NFTs that may be burnt to alter the appearance of Nike’s RTFKT CryptoKicks, which were released last month.

Nike has a history of purchasing and trademarking a wide range of linked names and emblems, regardless of its objectives for dotswoosh.eth. It filed trademarks for brands such as Nike, Nikeland, and “Just Do It,” . It also seems to have filed trademarks to its Nike swoosh and “Jumpman” emblems. This is done because of its wide range of metaverse uses last year.

Nike is also suing StockX for selling illegitimate Nike sneaker photos as NFTs, in an attempt to stamp out any improperly licenced Web3 assets.