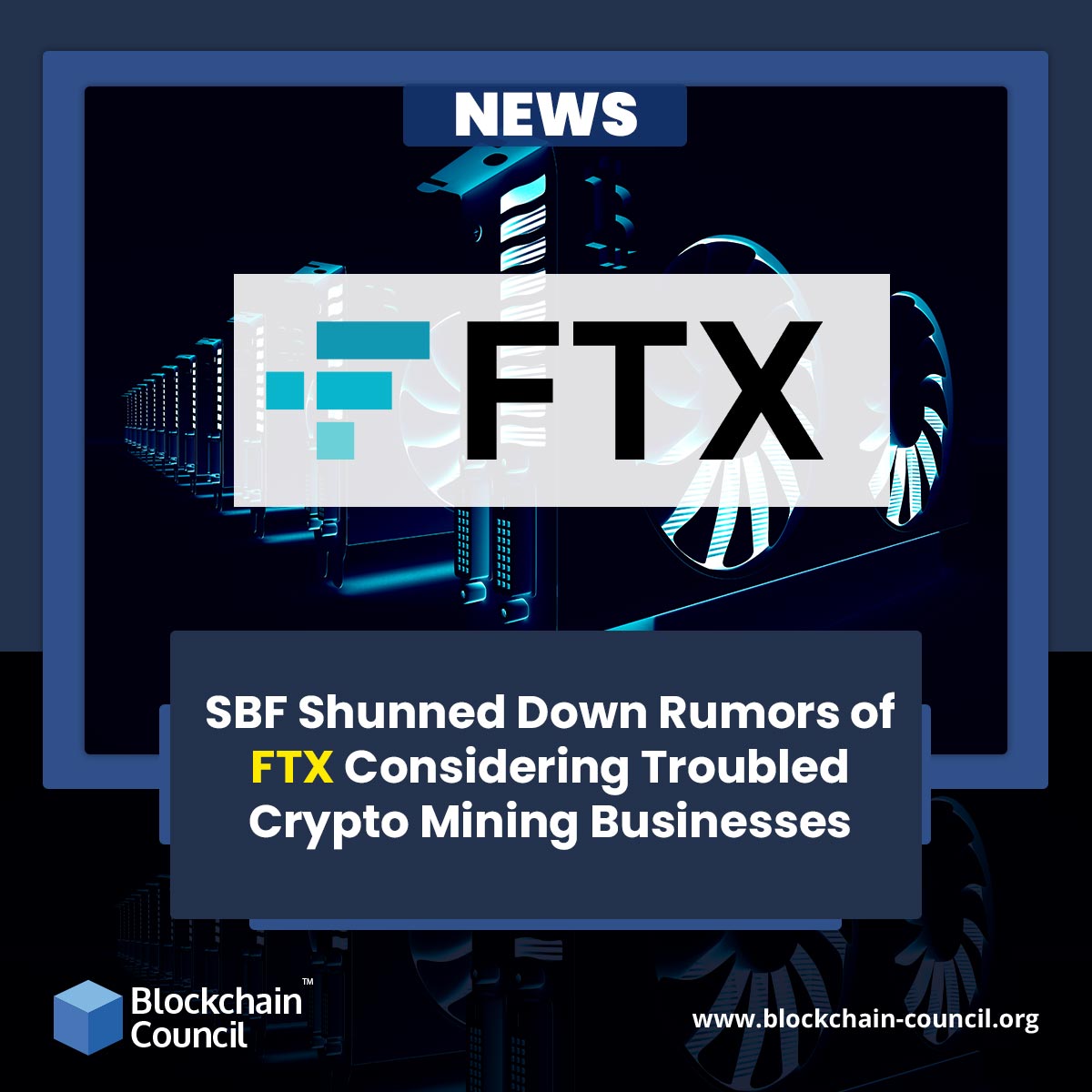 On Saturday, FTX founder Sam Bankman-Fried explained on Twitter that they “aren’t actually looking into the area,” dispelling rumors that the company was thinking about acquiring failing crypto mining companies.

On July 2, Bankman-Fried stated on Twitter, “Really not sure why the myth regarding FTX and mining businesses is spreading; however, the original comment was that we aren’t genuinely looking into the space.”

In a talk on July 1 with a famous tabloid, the founder of FTX stated that he did not want to rule out the prospect of a “compelling opportunity” in the mining sector, sparking rumors that the business was looking for mining companies. He said:

“I absolutely don’t want to reject that option, but there may come a really appealing offer for us.”

SBF was forced to explain that the company is “not really looking at miners” but is “glad to have discussions” with mining businesses because it appears that the comment was taken out of context.

er to be clear I said roughly "meh not particularly looking at miners, but sure, happy to have conversations with any companies" https://t.co/liHKS2y06Z

During the discussion, Bankman-Fried said that he did not see any acquisition synergies between crypto miners and the company’s primary strategy.

“I don’t see any specific justifications for why we should have, you know, an integration with a crypto miner, and there isn’t particularly any clear synergy from an acquisition sense from a strategic standpoint,” he said.

However, Bankman-Fried was questioned if he was investigating mining companies in the midst of a declining cryptocurrency industry which witnessed Bitcoin mining income drop significantly at the beginning of 2022.

Energy prices have also increased dramatically as a result of the Russian invasion of Ukraine, which has had a twofold effect on miners of all sizes.

According to Bitinfocharts, mining profitability, which is calculated as the daily dollars per tera hashes per second, has fallen to levels last seen in October 2020. The profitability of Bitcoin mining is currently $0.0956 per day for 1Th/s, down 80% from the peak of $0.464 in 2021.

According to a report from a famous tabloid on June 24, there are up to $4 billion worth of loans for Bitcoin mining, many of which are now underwater due to the decline in the value of both bitcoin and mining rigs.

According to a study published last week by a renowned website, Bitcoin (BTC) mining revenue has been at year lows not seen since the middle of 2021, falling to $14.40 million on June 17.

As per the data from Arcane Research published in June, public miners have been compelled to start selling up their shares due to the declining profitability of the industry. Moreover, it turned out that some of these businesses sold all of their BTC output in May, most likely to pay for running expenses and loan repayments.

The Blockchain Council provides a number of thorough certificate programs for cryptocurrency enthusiasts who want to work as specialists in the field of cryptocurrencies and blockchain technology. Candidates get broad knowledge on a variety of academic and practical issues during the courses. These reasonably priced services provide you direct access to the rapidly expanding blockchain and cryptocurrency industries.