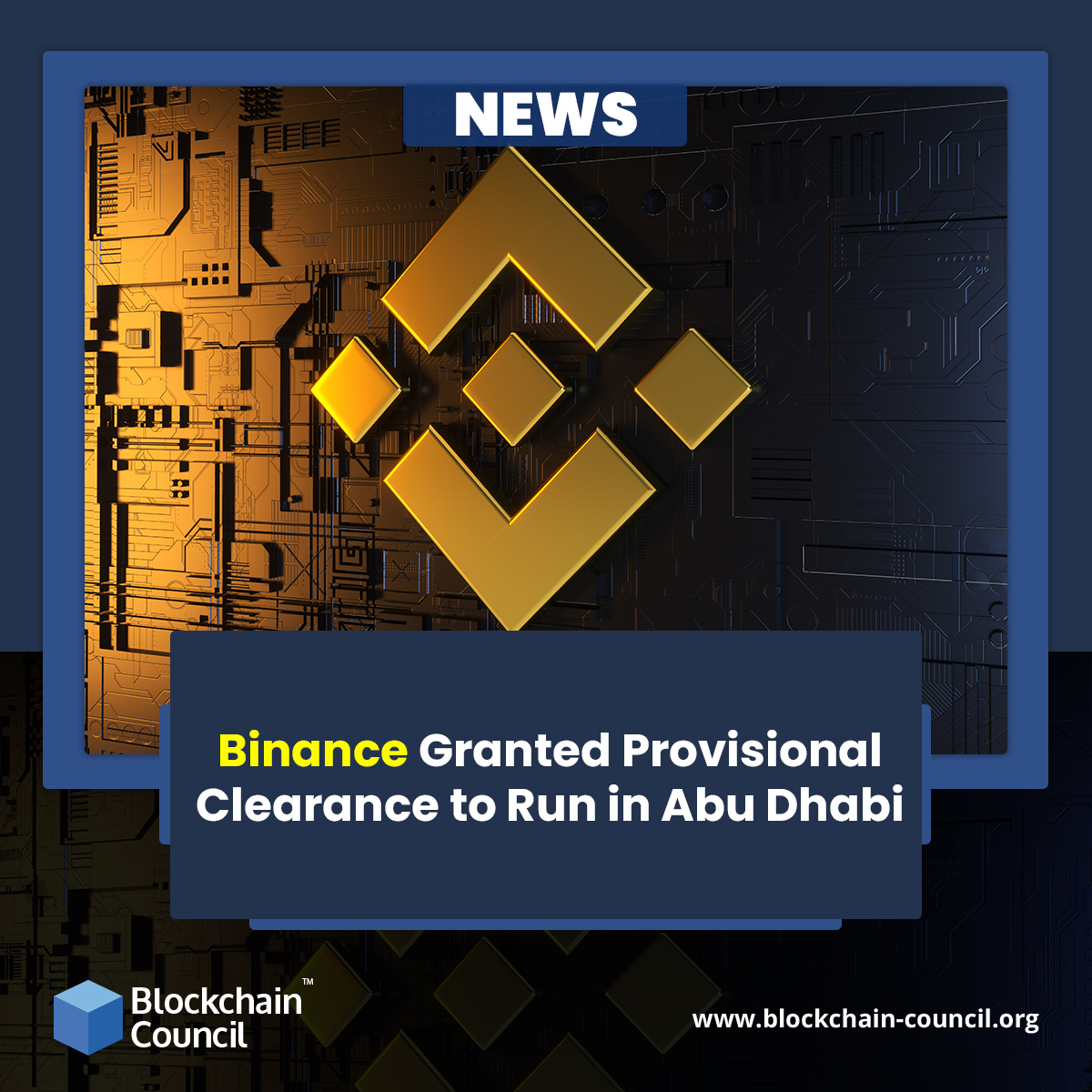 If compared in terms of trading volumes, Binance enjoys its position as the world’s largest crypto exchange. After seeking approval in Dubai and Bahrain, Binance is successful in getting in-principle approval to operate in Abu Dhabi.

Binance has been granted provisional clearance to serve as a broker-dealer in digital assets, including cryptocurrencies, by the Abu Dhabi Global Market (ADGM). With this, the crypto exchange embarks on another milestone and hopes to be a fully-licensed firm.

Binance, domiciled in the Cayman Islands and Seychelles, was founded in China in 2017. In the United States, the United Kingdom, Europe, and China, the exchange has been subjected to heightened regulatory scrutiny, and it has taken attempts to strengthen its relationship with regulators.

@binance, one of the world's leading #blockchain and #cryptocurrency platforms, received an IPA from the #ADGM Financial Services Regulator Authority. pic.twitter.com/jhHenzaahE

“Binance has been actively engaging worldwide regulators, like ADGM, as part of its continued commitment to maintaining global standards and together encouraging the development and sustainable expansion of the crypto ecosystem,” said Richard Teng, Binance’s head of Mena and former CEO of ADGM.

The ADGM is an international financial free zone based in Abu Dhabi, the capital of the United Arab Emirates, with a long history of regulating and monitoring financial activities performed within its jurisdiction.

ADGM declared in response to Binance’s efforts to get regulatory licenses throughout the world:

“Binance’s goals include establishing itself as a fully-regulated virtual asset service provider in an internationally known and well-regulated financial hub including IPA as an internal part.”

In order to further promote Abu Dhabi as a “fast-growing virtual assets center and digital economy,” the ADGM indicated that it aims to issue comparable regulatory permissions to local and foreign crypto companies.

The CEO of ADGM, Dhaher bin Dhaher, hailed the move and promised to help Binance develop a presence in Abu Dhabi.

The ADGM issued a consultation document on March 22 recommending that ADGM-licensed businesses be authorized to assist in NFT trading in the jurisdiction.

The Financial Services Regulatory Authority (FSRA), the free zone’s principal regulator, specifies that NFTs cannot be classified as ” financial instruments or specified assets”, rather they are more acceptable as intellectual property, in the ADGM consultation paper.

Allowing NFT trading, on the other hand, will almost certainly demand compliance with the ADGM’s Anti-Money Laundering (AML) and Sanctions Rules.

According to data provided by Binance, cryptocurrency adoption now accounts for approximately 4% to 5% of the worldwide population, with less than 1% of global wealth invested in this asset class.

According to government data, the digital economy generates roughly 4.3 percent of the UAE’s gross domestic product, or Dh100 billion ($27.2 billion).

Crypto Off-Chain vs. On-Chain Transactions: How Do They Differ?
Scroll to top