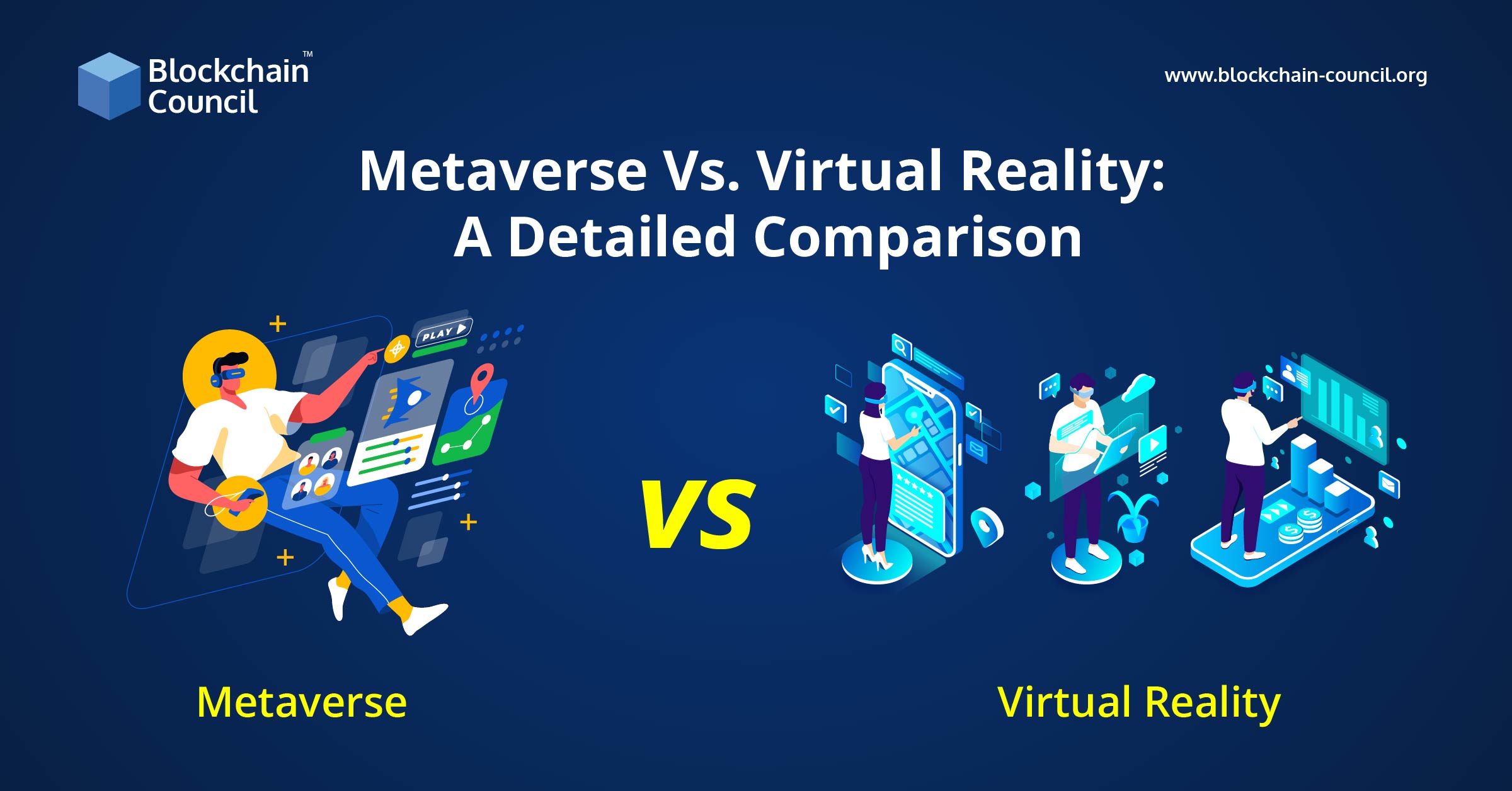 The financial, digital, and physical worlds are getting increasingly intertwined with each other. By just pressing a single button, the technologies we engage in have full control over our lives, giving us access to practically anything we wish for.

Metaverse is a comparable technology that will allow users to enter the actual virtual world and experience everything. You could say, “Well, we already have experienced it with Virtual Reality, right?” Since it seems like a virtual world, but although you are true about the notion of a virtual experience, the Metaverse and Virtual Reality are actually quite distinct from each other. Here’s a detailed analysis for you to know what you need to know.

The Metaverse is an online, open, shared, persistent, three-dimensional virtual realm that offers people to connect with each other from all parts of their lives. It would link many platforms, same as how the world wide web connects several websites using one browser.

Author Neal Stephenson’s sci-fi novel Snow Crash introduced the notion a long time ago. In this case, the concept of a metaverse initially seemed to be just science fiction, but it now appears that it may be a part of our reality in the coming years.

Augmented reality will power the metaverse, with each participant managing an avatar or a role. For instance, it can help you to organize a mixed reality conference in your virtual workplace with an Oculus VR headset, where you can finish your assignments and enjoy blockchain-based gaming, and also manage your crypto portfolio and virtual currency by just entering within the metaverse technology.

The first thing you need to know is that several features of the Metaverse can be witnessed in digital video gaming leading to virtual reality as the answer. Learn the Metaverse to comprehend how different facets of our life are brought together in online environments through apps like Gather Town or games like Second Life and Fortnite. Even when they are not metaverse-like applications, they are related. The metaverse technology is still in its nascent stage.

The metaverse will include economies, digital identities, decentralized government, and other systems in addition to games and social media.

Cryptocurrencies can also be a perfect match for Metaverse blockchain. It enables the formation of a digitalization based on several digital currencies and electronic valuables (NFTs). The development of cryptocurrency wallets like Trust Wallet and MetaMask will also promote Metaverse. Moreover, blockchain networks may be used to develop transparent and dependable governance networks.

Even at present, consumer-developed valued objects and money help in the advancement of a one, united Metaverse.

Big tech companies are attempting to pave the route for the future. Aside from this, the decentralized feature of the cryptocurrency zone grants lesser members to play in the Metaverse’s growth. All of these characteristics make blockchain technology a viable aspect of fueling this innovation.

What is Virtual Reality?

The theory about virtual reality is obtained from the meanings of the terms “virtual” and “reality.” The meaning of ‘virtual’ is close i.e., near, and reality is what we witness as individuals in our daily lives. Therefore, the word “virtual reality” critically suggests “close reality.” It alludes to a certain type of realistic simulation.

Our senses and perceptual abilities furnish us with data from all across the world. Touch, taste, smell, eye-sight, and listening are the five senses we studied in primary school. Although, they are merely our primary visible sensory organs. Humans, on the other hand, have many more sensations than this, including a feeling of balance.

Such additional sensory inputs, together with certain specific sensory information processing by our brains, guarantee a high transfer of signals from the surroundings to our human thoughts.

Although we talk about our surroundings originating through our sensations, one might be shown a version of reality that is not true yet looks like it from their viewpoint. This is what we think of as virtual reality.

The Metaverse vs. Virtual Reality: What’s the Difference?

The parallels to virtual reality are impossible to overlook while reading about the Metaverse. Nevertheless, there are a couple of significant differences.

Here are the most important points, if you want to know the key differences between virtual reality and the Metaverse,

Virtual Reality Is Well Defined, But the Metaverse Isn’t

The Metaverse, as per Mark Zuckerberg, is an embodied network where you are present in the material rather than just watching it. According to the latest Microsoft release, it is also known as a persistent digital environment populated by related technologies of people, places, and objects.

When we compare our own understanding of virtual reality, these descriptions might feel to be pretty vague. It’s also likely that even IT corporations lack a comprehensive description.

The choice to rename, according to Facebook, was a crucial element of the Metaverse’s development. They want to showcase the project they were working on. However, it is by no means the sole viable rationale. It’s also reasonable to argue that the Metaverse is nothing but a talking point to identify quality innovations in the existing world wide web.

Facebook, as the owner of Oculus Rift, is instrumental in the development of virtual reality. Simultaneously, they are one participant in a vast business.

The Metaverse is no exception. Although Facebook has changed its name to Meta, it is not the only corporation engaged. For example, Microsoft just launched Microsoft Mesh, their form of a blended-reality system that resembles the Metaverse and its different definitions. Additionally, the latest Facebook remark states that they see their company as developing a part of the Metaverse rather than the whole technology itself.

AS a result, it suggests that, unlike virtual reality, the Metaverse will be much bigger than just one firm. This is the primary distinction. When you use Virtual Reality, you’re using a brand’s system and seeing content created by a brand. Except for the equipment, which you don’t own unless you’re the owner of the brand, in which case you have us, but in the Metaverse wallet, you own everything you have since everything you have is your investment; therefore, you have complete ownership.

What are the technological differences between the two?

The Metaverse and Virtual Reality are both tremendous technological breakthroughs; however, Virtual Reality has restrictions and can only go so far because it’s all about having a virtual journey. With developments in VR technologies, it can only generate more sophisticated virtual experiences. In the end, virtual reality seems to be all about simulations and having fun with virtual worlds. The Metaverse, on the other hand, has no set boundaries since it is a product of multiple types of technology such as Augmented and Virtual Reality and more. It is itself a full-fledged digital world in which you control and may develop.ㅤ

How will users have varied shared experiences?

Once more, this is already something that VR headsets clearly enable us to experience. Virtual Reality and the Metaverse both allow you to share a virtual interactive world with others, but the scope of this virtuality differs significantly. Players will be identifiable by personal avatars that will interact with one another in virtual environments. Users will also be able to purchase or develop digital objects as well as places, such as NFTs. Virtual Reality is usually confined to a certain number of people, including a game’s player size restriction. In contrast, the Metaverse is considered an open virtual environment where we may all travel, enjoy, and communicate with everyone at no expense throughout the whole internet. It will be a shared digital space that consumers will be able to experience via the world wide web.

What is the difference between Reality for VR and Metaverse?

When you put on a Virtual Reality headset, you understand you’re wearing it and that it’s a screen covering your eyes that allows you to explore a virtual area while controlling it with a joystick or lasers. The Metaverse, on the other hand, is a virtual environment that allows you to merge the cutting-edge technology of Augmented Reality with Virtual Reality and more, allowing you to live as you would in real life, but with a virtual shape and experience. It enables numerous functions that VR alone cannot provide. Augmented reality, for instance, will permit metaverse characteristics to be reflected in the actual scenario. Virtual places will also be intended to be accessible from any location, at any time, with no restriction to wearing a headset.

Will the Metaverse Be Accessible in Virtual Reality?

You won’t need a VR headset to experience the Metaverse. Although, it is believed that headset users would get access to the majority of the features. Thus, it will lead to the distinction between working on the internet and utilizing virtual reality will mostly fade in the future. Virtual reality headsets may be utilized for activities that are now accomplished with cell phones. If the Metaverse is as successful as Facebook expects, virtual reality will become much less of a luxury product.

Will the Metaverse Be Limited to VR Tech or not?

Virtual reality is currently being employed in educational, therapeutic, and sporting applications. But it is still perhaps best recognized as a sort of entertainment. Talking about scope, it definitely is like a fresh and advanced version of the world wide web. It’s predicted to change how users work, use the social media platforms, and even browse the web, hinting that, while several users have discarded virtual reality headsets, the metaverse technology is unlikely to be neglected.

How will the Technologies be Blended into Our Real Life?

Virtual reality is fantastic for experiences, but once you switch off the product, it’s pointless. The Metaverse, on the other hand, is continually moving and blending real and virtual experiences using things like Augmented Reality and other technologies, giving you a true, real-life sense in a virtual style that is always available and has real-life results in multiple formats.

Will the Metaverse Replace the Internet in the Near Future?

Virtual reality has not had the widespread influence that some had predicted. As a result, participants might limit the time they wish to spend using a headset.

It will not be a challenge while using the metaverse technology that would be available to everyone using and without using a VR headset. As a result, they believe it will have a considerably greater impact on their audiences.

Simultaneously, the Metaverse is unlikely to replace the internet completely. Virtual reality technology is an interesting substitute for screen displays. It will be a fascinating addition to the digital world. Although, neither of these focuses on being an alternative for each other.

Metaverse technology is far more advanced than virtual reality, as per the detailed report of differences between the Metaverse vs. virtual reality. Virtual reality is practically one of the basic automation for the advancement of the Metaverse. It grants the consumers to be a part of the metaverse universe. Nevertheless, high-tech VR still has limited power leading to a fixed number of efficient components.

The Metaverse, on the other hand, is a vast and rapidly expanding virtual environment that would be a 3D depiction of the internet and the real virtual world. Users may navigate around virtual 3D environments in the Metaverse in the same way they can browse through different websites. Most essential of all, there is no end to the potential of supporting advanced technologies in the Metaverse.

If you want to know all there is about Metaverse, then you can probably opt to learn Metaverse. Blockchain Council offers some of the best in-demand certification courses at an economical price just for you. You need to pick the course that best meets your expectations.

What Are The Biggest Crypto Venture Capital Firms?
Scroll to top