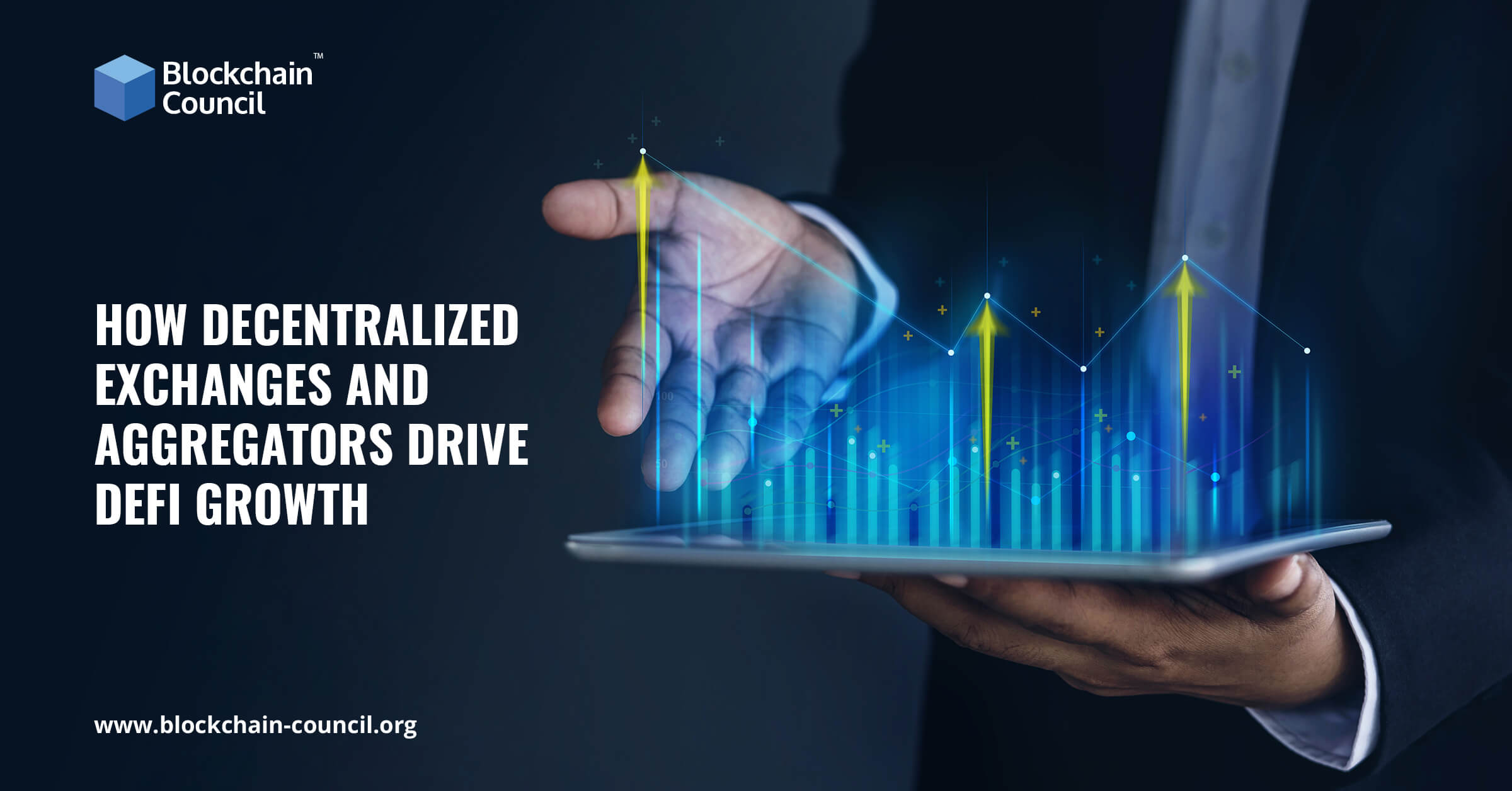 DeFi is constantly garnering attention and rising in popularity, and so DeFi certification courses. The trading volume of DEXs topped $11 billion in August 2020. Although Centralized exchanges (CEXs) now dominate cryptocurrency trading, Decentralized exchanges (DEXs) are quickly gaining traction among techies and the blockchain community.  Uniswap, for example, is a DEX that processes $2 billion in transactions every day.

In this post, we will be discussing DEX in detail.

Difference between DEX and CEX

To have a proper understanding of DEX, let us first understand the difference between DEX and CEX.

An autonomous financial protocol supported by smart contracts and peer-to-peer payment systems, such as PancakeSwapm or Uniswap, is DEX. Traders can send digital assets to others through DEXs, and all transactions are recorded and visible on the blockchain. It does not require an intermediary to clear transactions. Instead, smart contracts are used to execute and verify them. Meanwhile, CEXs, such as Binance, are online trading platforms that connect buyers and sellers through an order book. They are popular and dominant online trading platforms based on the concept of online brokerage. Centralization and ownership are the critical differences between DEXs and CEXs.

The areas where instructions are coordinated and implemented are referred to as centralization. Whereas all services in DEXs are managed and controlled by smart contracts or relayers that form a network of trustworthy nodes.

Order books in CExs are responsible for assessing and confirming incoming orders to ensure that users match appropriately. The transaction’s execution proceeds further by the exchange software and servers in the second stage. DEXs, on the other hand, do not utilize any intermediary and facilitate crypto-asset exchanges by trading through smart contracts.

Ownership is the authorized control of the keys to accounts on exchanges. Users own all assets in their personalized wallets when trading on decentralized exchanges. Users retain control of their private keys when transacting on a non-custodial DEX platform. They can use their wallets to choose, submit and confirm trades, treating exchanges as a matching service. Users can make a match and then cancel it using a smart contract on a non-custodial exchange.

CEX, on the other hand, is custodial. As a result, users do not have complete control over their crypto assets. Users that purchase Bitcoin on a CEX, for example, do not yet own the coins. Therefore before purchasing Bitcoin, they must request to add the coin to their external wallet address.

The launch of the 1inch MVP proves the need for DEX aggregators. At the ETH New York hackathon in 2019, Anton Bukov and Sergej Kunz produced the 1inch MVP in 18 hours. They did it merely because they required it for personal reasons. ” The primary consumers of 1inch were Sergej and I,” according to Anton, the company’s CTO.

Manually checking for the best trading prices on all the DEXs like Uniswap, Kyber, and 0X, before transacting was inefficient and tedious.

A practical algorithm was required to scan every DEX for the best trade price and offer an optimal deal instantly, just like other crypto users.

To attain the best and economical price for an exchange, you must search across all the DEXs for the best price. However, screening manually is inefficient and does not allow for sophisticated trade networks and routes. Therefore, DEX algorithms play a crucial role in reducing exchange costs. As a result, DEX aggregators have witnessed tremendous growth in recent months keeping in line with DEX volume growth.

How do DEX Aggregators work?

The primary goal of a DEX aggregator is to provide a customer with better exchange rates than any other platform with minimum transaction time. In addition, protecting consumers from cost effects and reducing the probability of transaction failure are some other significant goals of DEX.

DEX aggregators pool liquidity from multiple DEXs, allowing users to achieve higher token exchange rates than they could on a single DEX.

DEX aggregators have the potential to optimize token pricing, wastage, and trade fees resulting in a better valuation for users. An exchange contract split among numerous DEXs, for example, can get a user significantly better pricing than trade on a single exchange.

DEX aggregator integrations are often beneficial to DEXs as they rope in additional users and volume. According to recent research, high-volume traders are increasingly using DEX aggregators, while retail users continue to use DEXs directly.

The DeFi boom and the DEX aggregators

DEX aggregators are a comparatively fresh idea emerging as a result of the continuous developments in DEX. However, they have grown increasingly essential to consumers during the recent DeFi boom. This is because more and more people are prioritizing decent trade deals.

1inch, a DEX aggregator, just unveiled the second version of its protocol. The new version includes Pathfinder, an API with a new revelation and navigation technique. Pathfinder can aggregate trades over the 21 liquidity protocols it supports and use multiple market depths within the exact mechanism if essential.

Why use ‘Market Depths’?

The number of open buy and sell orders is used to calculate market depth, which measures supply and demand for liquid assets like cryptocurrencies.

This more complicated strategy results in measurable benefits for the user. For example, 1inch offers an exchange rate for 1 sBTC-sUSD over 98 percent better than Uniswap, owing to enhanced quotes.

The usage of ‘market depths’ is a significant optimization of the protocols of the previous version. The new algorithm takes a more complex approach than just aggregating an exchange across several protocols. It also includes different ‘market depths’ acting as a sort of bridge between the source and destination tokens.

Pathfinder’s partial and dynamic fill mechanism is 1inch’s strategy for minimizing the frequency of unsuccessful transactions.

When a customer seems to make a trade on 1inch, the aggregation of transaction conducts amongst different protocols. Aggregation provides the user with the rates that were initially displayed in the UI. However, before completing the trade, the rate on one of the protocols can change, making it less appealing to the customer. This is where the term ‘partial fill’ comes to play. This feature can partially fill the order, and the channel where the rate alters or several other routes can be effortlessly terminated.

Partial fill is set to default in Pathfinder. However, it can be turned off in the ‘advanced settings’ menu. Using this option is recommended to protect users against price slippage and unsuccessful transactions, particularly obvious for large exchange volumes. Due to this, the consumer successfully avoids failed transactions, and their unswapped coins simply return to their wallet. However, the consumer solely pays the exchange fee in such circumstances. Furthermore, consumers can save extra bucks by consuming Chi gas tokens. Chi gas tokens can slash gas expenditures by 43 percent.

In the same way, the dynamic fill option may help prevent unsuccessful transactions by switching parts to a different protocol in the split or path.

For example, consider an algorithm aggregating an exchange between the protocols Uniswap, Sushiswap, and Balancer. If the Uniswap exchange fails, the entire swap will shift to Sushiswap and Balancer. However, the exchange will still progress, giving the user the rate they had seen earlier and accepted in the interface.

The idea behind the development of PathFinder is to provide a highly flexible algorithm that could accommodate a wide range of protocols. Curve, Chai, Balancer, Uniswap V1, Uniswap V2, Sushiswap, Kyber, Mooniswap, Oasis, Compound, Yearn, Bancor, and Aave, are presently supported by 1inch, thanks to Pathfinder.

Apart from this, Pathfinder is built in such a manner that it can handle blockchains other than Ethereum. Furthermore, there are plans to add support for Binance smart chain, a parallel Binance chain.

In the meantime, the Pathfinder can be upgraded to allow for collaboration with a centralized exchange. As a result, startups would have entirely new business potential to build on top of the 1inch protocol. They may, for example, develop products that act as a bridge between CEX and DEX.

The capability to deploy collateral tokens from lending protocols Aave and Compound as part of the exchange path is another significant feature of Pathfinder.

Pathfinder may now relocate, pack, or unpack a user’s collateral tokens in a single transaction, saving time and money. In addition, since packing and unpacking are automated, users can quickly trade collateral tokens from the reserves.

Finally, Pathfinder gives the users the option to choose between the “maximum return” and “lowest gas” features. The maximum return feature has the switch taking complicated routes to obtain the best value for the user. On the other hand, in the lowest gas option, swaps are carried at market rates without splits across several exchanges. However, the customer pays the lowest feasible gas fee.

The first decentralized exchange surfaced in 2014, but it gained popularity when decentralized financial services based on blockchain gained attention. Even the AMM technology helped alleviate the liquidity issues that DEXs has experienced.

Since there is no central authority authenticating the information shared with centralized platforms, it is difficult for such platforms to enforce KYC and Anti-Money Laundering checks. However, regulating bodies may still try to impose controls on decentralized systems. Custodian regulations don’t apply to these services, as those that do allow user deposits still require user-signed blockchain messages to move funds from the platform.

Users can now borrow funds to leverage their positions or supply liquidity to collect trading fees on decentralized exchanges. More use cases may be generated in the future because these platforms are autonomous smart contracts based. Flash loans, are the loans acquired and repaid in a single transaction, are the best example of decentralized finance innovation.

If you are planning to upgrade or build your DEX platforms, you can look for suitable solution platforms and seek professional guidance. However, if you want to have the basic knowledge or become an expert, you can learn DeFi. You can search through various cryptocurrency learning or Blockchain certification courses. In addition, several organizations are providing DeFi training and DeFi certification courses.