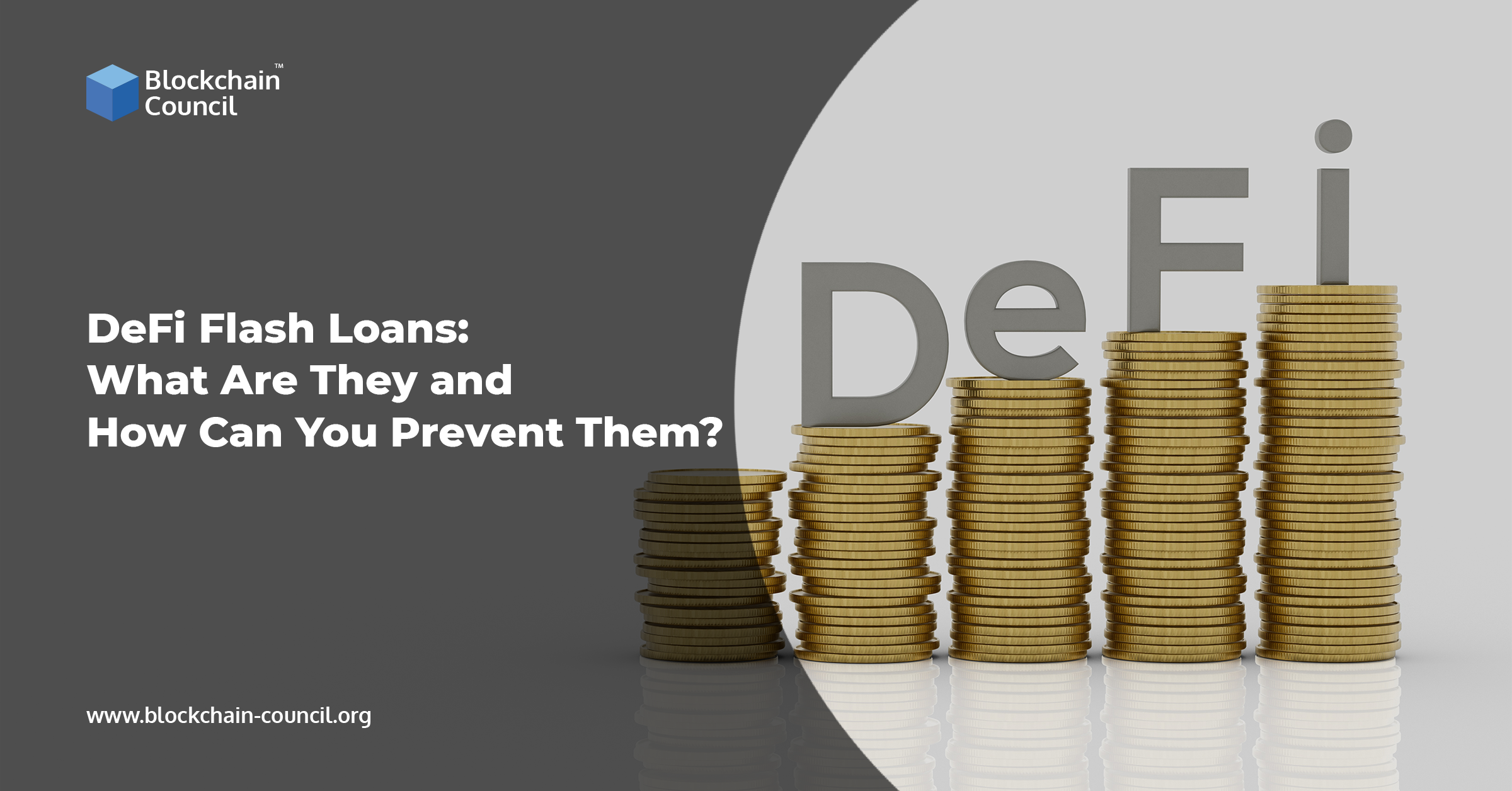 Traditional banking requires a range of documentation, including a formal ID, proof of income, and reserves, in order to obtain a loan. In the event of a fast loan, none of this is important. As the name implies, such loans can be provided instantly, providing consumers quick access to money. Flash loans are unquestionably unique in the crypto world, and many claim that they’re really valuable. However, there is a drawback- they allow cyber thieves to take advantage of protocols that aren’t well-protected.

The DeFi charm has only just begun and is here to stay, so if you’re one of the early investors of Defi projects and currencies, be patient and continue to do your research in picking up its multiple-use case to earn some extra cash. Because Defi is still vulnerable to various hacks and security breaches, a little more vigilance will ensure that its charm remains intact.

Today, we’ll learn about another interesting Defi product called Flash loans, as well as the use case and related risk considerations to be wary of.

What Are Flash Loans and How Do They Work?

The flash loan is a particularly unusual cryptocurrency trading product in the crypto Defi market, where consumers can borrow an unsecured loan from the lender without the need of a third-party middleman. The smart contract manages the transactions and guarantees that they are only carried out when all of the contract’s stated rules have been rigorously followed.

Similarly, a quick unsecured loan works for you by establishing specific standards that must be followed for your loan transaction to process.

Why is Flash Loans Unique?

Loan with no collateral

Because a flash loan has such a brief lifespan, all lending and borrowing must occur inside that time frame before it vanishes like a flashlight.

What were the origins of flash loans?

In contrast to traditional loans, flash loans do not need a borrower to show evidence of income, reserves, or collateral.

While this may appear to be in the borrower’s favor, there are certain disadvantages too. Decentralized finance (DeFi) protocols have aided the popularity of flash loans. And the majority of them are connected to the Ethereum network.

In the year 2020, Aave, an Ethereum lending platform, established the concept of flash loans. As a result, the concept is still fresh and has a lot of flaws to work out. Flash loans, according to Aave, are “a sophisticated idea geared for developers” with “no real-world analog.”

What are the benefits of taking out a Flash Loan?

Traders may benefit without putting their money at risk, thanks to flash loans. They’re useful for a variety of tasks, including:

Traders earn from flash loan transactions by recognizing price differences between price exchanges and taking advantage of the passage of time. For example, if the price of a token varies between exchanges, a trader may use a flash loan and a second smart contract to purchase tokens for $5,000 on one exchange and sell them for $5,500 on another, making a profit of $500. The trader then pays back the loan while keeping the profit.

Because rapid loan rollout combines all complicated operations into a single step, the gas charge required is relatively low, whereas standard transactions typically involve numerous phases. Traders may also save money on gas by using the flash loan service to purchase and sell digital currencies and tokens.

Now that you understand what a flash loan is and how it might help you. It is critical to comprehend the bad aspects of it.

The Risks of Flash Loan Transactions

Several assaults on flash loans have occurred over the years, resulting in millions of dollars in losses for weak DeFi protocols. Malicious actors continue to develop methods to abuse the loaning process in various ways; therefore, the technology underpinning the Ethereum network and DeFi as a whole might require some refinement.

Smart contracts aren’t always constructed appropriately, leading to security flaws that hackers can exploit. In addition, the data supplied is sometimes erroneous or not secure, making the contract open to attack and allowing cybercrooks to walk away with millions in lent funds.

What is the definition of a Flash Loan attack?

Flash loan attacks are a sort of DeFi attack in which cyber hackers borrow money through lending protocols and use it to influence the market. Then, they take advantage of smart contract weaknesses to swindle the other party or make undesirable alterations to the smart contract code. Because they’re so easy to get away with, they’re the most popular sort of DeFi assault. They appear to have become increasingly widespread in the last year, with some high-profile incidents making headlines.

What is Flash Loan attack methodology?

As previously said, flash loans allow consumers to borrow large sums of money on several exchanges with no money down. The loan processes immediately, but you must do something with the borrowed cash to be able to repay them.

Flash loan attackers can borrow a large sum of money since decentralized lenders do not need collateral. The monies in crypto-asset funds can thus be manipulated on one exchange and resold on another.

The fact that the attackers may influence the market while technically adhering to the rules is perhaps the most aggravating aspect. They may also repeat the operation numerous times without leaving a trace, stealing millions of dollars in the process.

Is it possible to avoid being a victim of a Flash Loan attack?

Because flash loan assaults are still annoyingly widespread in the DeFi area, it’s clear that there’s no one-size-fits-all solution available right now. However, there are a few things you can do to help avoid them:

It’s a frequent misperception that DeFi vulnerabilities are created by Flash Loans. In truth, flash loan assaults are nothing more than oracle attacks. Provable, WitNet, and ChainLink are third-party blockchain oracles that connect smart contracts to the non-DeFi world. They allow for the safe transfer of off-chain data to the on-chain environment of a blockchain network.

The delay in reaction times from DeFi platform providers is a crucial factor that enables hackers to conduct flash loans. As a result, several security systems have been created, the largest and most well-known of which being OpenZeppelin Defender.

Project managers may use OpenZeppelin Defender to identify smart contract exploits and other suspicious behavior. As a result, they can respond considerably more quickly and take measures to neutralize the assaults.

There appears to have been an uptick in flash loan assaults recently. Here are a few high-profile examples of attacks that demonstrate how easily they may occur.

In the early 2020 dYdX flash loan attack, the attacker exploited the platform to get the loan, then split the lent income across two distinct lending platforms, Compound and Fulcrum. Fulcrum had no choice but to purchase WBTC because the initial half of the loan was utilized to short ETH against WBTC. The order was executed through Uniswap, but because of Uniswap’s lack of liquidity, the price of WBTC skyrocketed, forcing Fulcrum to pay much more for it.

This protocol was also targeted in 2021, with the greatest crime totaling $130 million. The cybercriminals modified the oracle’s pricing that employed several flash loans. They got away with millions of dollars in CREAM liquidity tokens and have yet to be apprehended.

The most recent flash loan attack on PancakeBunny took place in May 2021, when an exploit caused its token to lose more than 95% of its original value. PancakeSwap was used in this attack to borrow a substantial quantity of BNB, which was subsequently utilised to affect the price of BNB and BUNNY in PancakeBunny’s pools. As a result, BUNNY was stolen in significant quantities and placed on the market, causing its price to plummet.

Its evident Flash Loans are a vital instrument in the DeFi world. They are currently vulnerable to various threats, but the tide is turning. The severity and frequency of these assaults are anticipated to decrease over time as more study into the issue, improved security measures, and the usage of price oracles are conducted.

It’s also crucial to remember that Flash Loans are still in their initial phases, and their practical implications have yet to be extensively investigated. For example, some claim that they will be used for increasingly imaginative objectives, such as borrowing cash to purchase tokens to force governance votes through. Nevertheless, flash Loans have a bright future ahead of them, so keep an eye on them.

With the rise in DeFi popularity, there has been a rise in the demand for DeFi certification courses. Numerous technical experts are heading for DeFi training programs to add extra stars to their resume.

Blockchain council is one such platform that not only keeps the audience up to date with the trending technology but also offers courses and certification courses in the same.