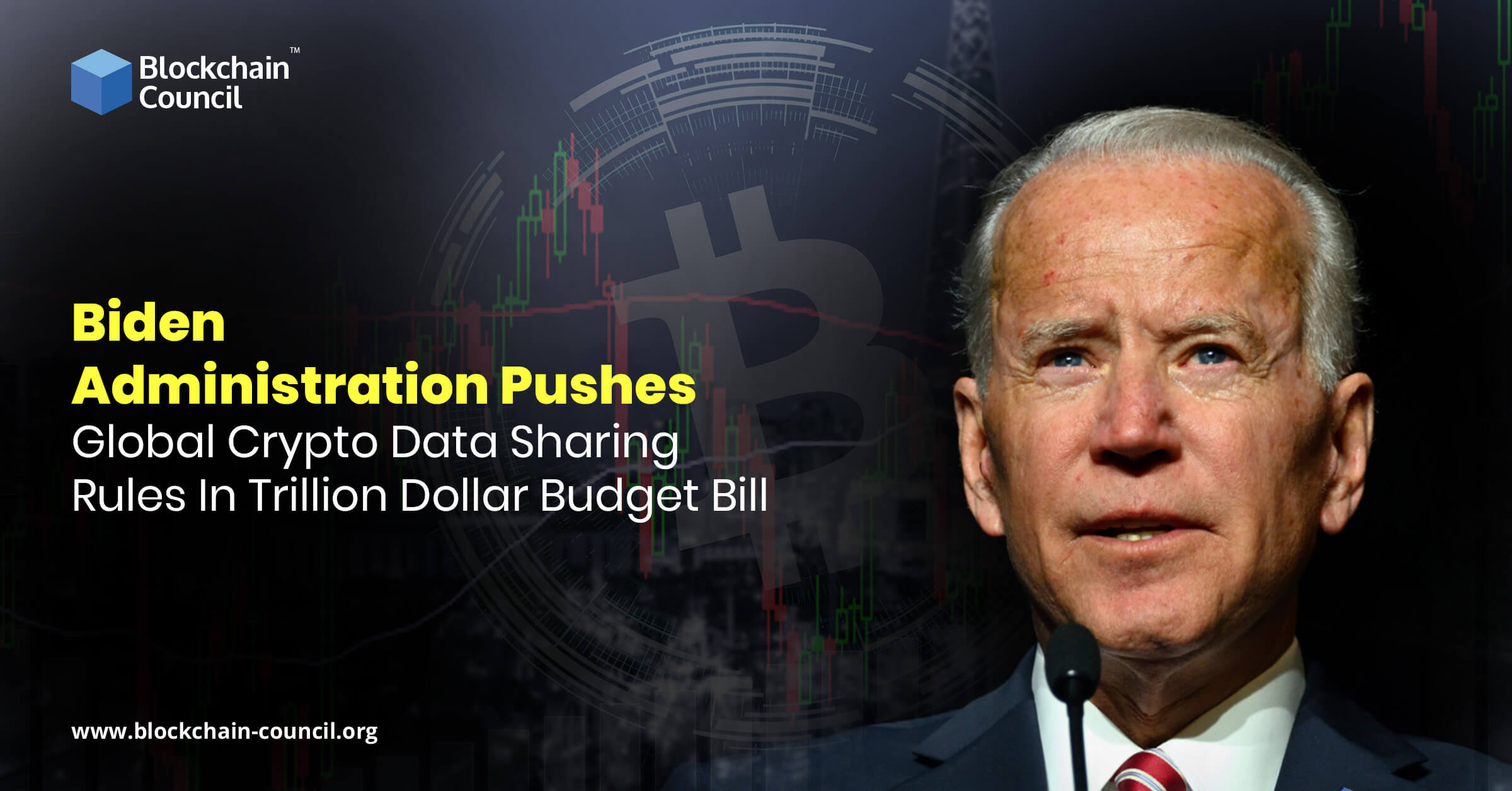 In a staggering $3.5 trillion budget plan, the Biden administration is reportedly pushing for the inclusion of global crypto sharing data rules in that budget. The U.S treasury demands that the crypto businesses operating on American soil will have to share the data related to foreign account holders so that it becomes easier for the United States to share that information with the trading partners who operate on a global scale.

This was actually included in the proposals that were released earlier this year that were majorly focused on issues concerned with revenue generation. The proposal was aimed to generate information which the U.S officials could easily share in return for information on the American taxpayers who are involved in the trading of cryptocurrencies on foreign soil, and then they would leverage this information in order to enforce tax compliance.

On the other hand, a separate infrastructure bill that was passed by the Senate stated that they would add crypto exchange platforms and any such institution that facilitates transactions using Ethereum or Bitcoin or any such digital tokens, to the category of ‘brokers’ and as a result they would have to report on a regular basis, about the capital profits and losses to the customers and especially to the IRS.

According to the Greenbook owned by the Treasury, the very nature of the crypto market on a global scale is such that it can easily allow the taxpayers in the United States to conceal such assets and valuables which are taxable, using offshore digital wallets and crypto exchanges. It also states that the U.S taxpayers often avoid reporting taxes by creating such entities which can act in accordance. The Treasury firmly believes that in order to counter the potential of cryptocurrencies that can be used for evasion of taxes, it is necessary to make use of third party reporting so that it becomes easier for them to identify such taxpayers and also in strengthening tax compliance issues.

However, they have figured out that in order to gain information on such detailed information from other countries, even the United States Government will have to provide information on the taxpayers of those countries who have digital accounts in the United States. This is a part of the agreements concerning the tax information exchange. The Treasury is likely to enforce the new rules as prescribed in the proposal starting from the year 2023 and these new rules will apply to the providers of digital wallets for those who hold accounts and other such cryptocurrency exchanges. The ‘hosted’ wallets like those also include platforms for trading and investing crypto, for example Gemini and Coinbase.

Experts have pointed out that these new rules are a lot similar to the obligations that are present under a certain 2010 law which required that certain financial institutions operating abroad will have to provide information regarding the United States’ taxpayers’ accounts to none other than the IRS and this fact has also been corroborated by an official in the administration. The issue has surfaced during the discussions with the committees working on tax writing, Senate Finance and House Ways and Means.

It is being said that the Democrats are now trying very hard to generate revenues in any way they can so that it can cover the huge budget plan that they have announced. This budget package declared by the Biden administration is expected to address issues like clean energy, child care, Medicare, paid leave and many other compelling areas that collectively sum up the domestic policy agenda of Biden and his administration.

The top Democrats, which even includes Nancy Pelosi, who is the Speaker, have maintained that they are in favour of the bill to be completely paid for, while the moderates residing in both the chambers are unanimously raising concerns about the massive price tag of the package.

The measures that have been undertaken in order to support tax compliance are believed to help fund the budget package. Along with that they are also considering raising the taxes for individuals and corporations who are making more than $400,000 every single year. Charles P. Rettig, who is an IRS official has made an estimation regarding the tax gap, which is in short the difference between the taxes that are owed and the taxes that are actually paid to the Federal Government, and the estimation amounts to a staggering amount of $1 trillion every single year, a portion of which comes from taxes that are not paid on cryptocurrency trades.

Are you interested to learn more about Blockchain, Bitcoin and other cryptocurrencies? Blockchain Council is one such organization that offers online training and certification programs to aspiring trainees to provide them with desired skill sets so that they can have a successful career in the Blockchain ecosystem. Demand for blockchain professionals is on the rise, and Blockchain Council certifications are diversified to meet each aspirant’s discrete needs. They have a plethora of training and certification courses on Cryptocurrencies that provide world-class knowledge and support from the veterans of this industry