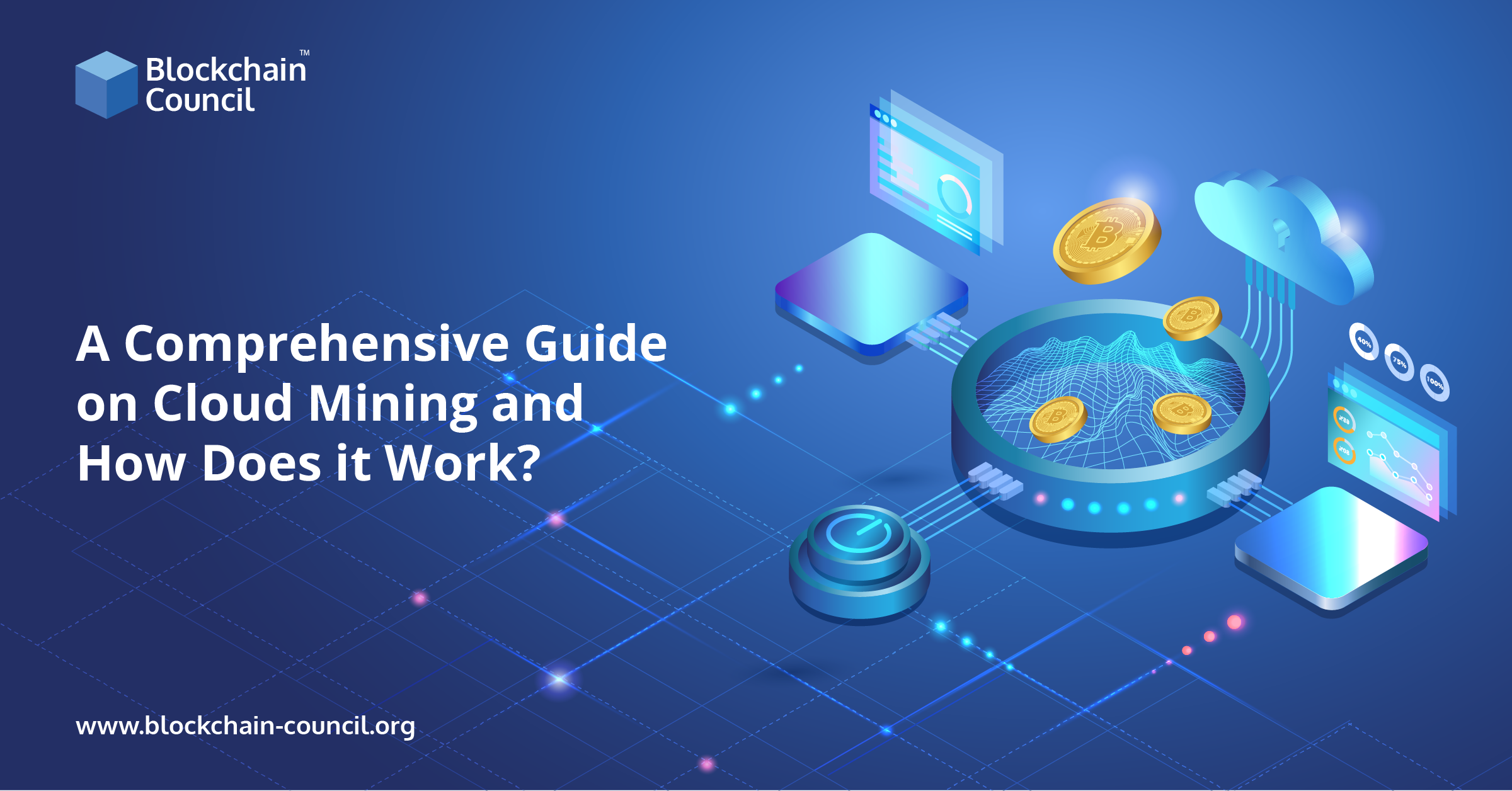 New income-generating options have emerged as a result of the bitcoin industry’s growth. Cryptocurrency mining is one of them. As the participants engage their time, processing power, and money in protecting and verifying their preferred crypto network, they are elevated to the position of stakeholders on numerous blockchains.

A cloud mining operation is a cryptocurrency mining alternative to traditional mining. Cloud mining is often considered to be a more advantageous technique of generating digital money for individuals who are not technically savvy, as well as those who do not want to run and maintain their own hardware and software. In this post, we are going to understand the concept of cloud mining and how it works.

What Is Cloud Mining?

Because mining is done in the cloud, miners do not have to worry about noise, temperature, resource management, or energy costs. After locating a reputable cloud mining service provider miners merely need to pick the contract that best meets their expectations. They must make a deposit in digital or fiat currency, after which the provider will provide them with everything they want for the proper functioning of the resources.

The cloud mining service provider should have invested in high-end mining infrastructure and, ideally, established its farm in a region with lower power costs and a more pleasant climate. The farm’s overhead expenses are kept to a minimum using this method.

This is an excellent option for those who do not want to become engaged in the technical side of bitcoin mining. Members can watch their hash rate and cloud mining money using their telephones the bulk of the time. For the time being, certain cloud mining setups may automatically change the generated hash power to the most profitable mineable currency.

Bitcoin mining takes a long time and needs expensive mining equipment, all for a small payoff. Bitcoin cloud mining services allow anybody to start mining bitcoin without needing to purchase expensive equipment or possess technical knowledge.
The concept is straightforward, similar to that of any other kind of cloud mining, involving a remote data center with pooled computing power – hashing power. While the return on investment (ROI) of bitcoin cloud mining is unquestionably favorable.

However, it all relies on the initial fees as well as the current value of bitcoin. Because you’re basically renting processing capacity from a cloud mining service provider, the price per gh/s or th/s, as well as service fees, can have a big impact on your genuine ROI.

Cloud mining may save you a lot of money on power costs, noise, and heat when compared to a GPU mining equipment, which can cost anywhere from $2,000 to $8,000 for a high-end device. All you have to do now is purchase the amount of hash power you want and set an investment period before sitting back and watching the money roll in. Like any other type of investment, cloud mining has its own set of risks and uncertainties.

How Does Cloud Mining Work?

Cloud mining models may be divided into two categories:

Host mining refers to the purchase or lease of rigs on mining farms. In this case, you may have to pay for the rig’s maintenance and installation. This technology has the advantage of lowering expenses by harnessing adequate electricity. You also have more control over your hired rig(s) and may transfer the hash power generated to mining pools to boost your chances of discovering a new block. Finally, you have total control over the obtained money because you just have to pay the cloud mining service for maintenance and setup charges.

A bitcoin mining rig is a computer setup that mines bitcoins. The rig might be a dedicated miner, meaning it was purchased, constructed, and run especially for mining, or it could be a computer that serves other purposes, like as gaming, and is only used to mine part-time.

Unlike hosting mining, leasing hash power is renting a portion of a mining farm’s hash power. You won’t have to pay any maintenance or setup costs here. To obtain a percentage of the farm’s profits, you only need to subscribe to a plan. When the farm discovers a new block and receives cryptocurrency as a reward, the money is split among users based on their share of hash power.

What are Mining Pools and How Do They Work?

Members of a mining pool group their processing power in order to increase the chances of producing a block in a cryptocurrency’s blockchain, which requires solving difficult cryptographic puzzles. Participants that successfully finish the work are rewarded, usually, in the form of the bitcoin they mined. They get money in accordance to the amount of processing power or work they put into the pool as a whole.

Cloud mining is a wonderful alternative for people who want to benefit from the economic benefits of mining without having to deal with all of the technological and mechanical requirements described earlier in this article. Cloud mining may also be able to assist in lowering the costs of running a mining machine.

However, there are several disadvantages to cloud mining that you should be aware of before deciding to use it. The first is the high rate of cloud mining-related scams. The sector has evolved over time into a perfect environment for deception. It may be difficult for the investors to verify the promises given by the cloud mining service because they may not have the opportunity to see mining farms in person.

Some cloud mining firms even use pyramidal plans, in which early investors are rewarded with new deposits. Exit scams are eventually perpetrated by suppliers who realize this is unsustainable. As a consequence, it’s up to you to do your homework before deciding on a cloud mining service. You should study reviews, research the platform’s trustworthiness on crypto forums, consider withdrawal restrictions, and reject offers that appear too good to be true.

Another thing to keep an eye on is the possible profitability of the service. If the cost of leasing, purchasing, or operating cloud-based devices does not match the amount of hash power available, you may lose money. Consider the mining capital and potential revenues before agreeing to a cloud mining arrangement.

Is investing in cloud mining risky?

Cloud mining is unsafe since you’re depending on someone else to mine cryptocurrencies without first ensuring they have the requisite hardware to mine bitcoin or whatever coin you select.

Many deceptive cloud mining firms pretend to be mining bitcoin on your behalf but actually take your money. USD miner is just one of several. They sometimes operate in complete secrecy, making it difficult to establish who controls the platform, and they regularly promise astronomically huge returns in a short amount of time.

Is cloud mining a good investment?

Yes, it is possible. You’ll have to spend some bucks to rent these miners, and mining pools will hold a share of your revenues. It can be profitable, but some analysts believe that buying bitcoin is a better option.

Your profits will be determined by the market value and power of the miners used by the pools. In other words, as compared to older models, newer models will have better specs and will likely generate higher yields. For example, if you keep your bitcoin instead of selling it for ordinary money like the US dollar, you’ll be subject to bitcoin’s price fluctuations.

Many experts feel that cloud mining is the future of crypto mining because of its benefits and prospects. However, with the spread of frauds and scams, it remains a problematic area for the time being. That implies that before investing in a company’s technology, miners must conduct a considerable study.

If you want to gain professional knowledge in the cryptocurrency and blockchain domain, then Blockchain Council’s best certification courses are available for you. Blockchain council believes in providing in-field training along with theoretical knowledge. These courses are according to the industry demand and light on your pockets.

Blockchain Layer 1 Vs. Layer 2: A Detailed Comparison
Scroll to top