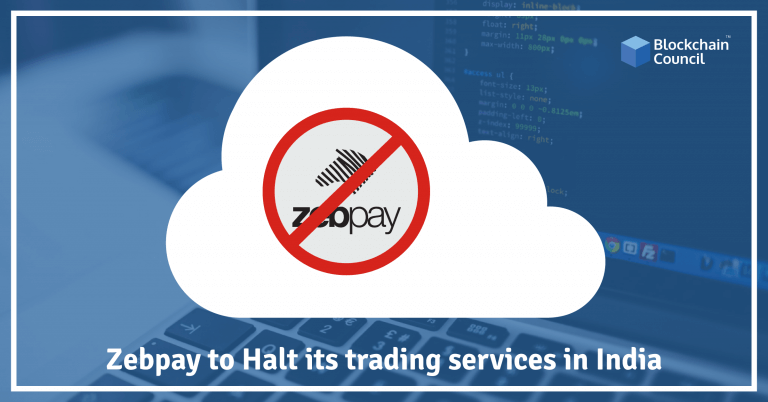 Blockchain and cryptocurrency boom has inflicted every nation positively. However, at the same time, we cannot undermine the fact that there are nations that have still not embraced the technology entirely. Coming to the Indian perspective on cryptocurrency, then we all know that RBI has banned cryptocurrency exchange in India and has made it illegal. This has not only put many of the investors in dismay but has also halted many such exchange services in the nation. Zebpay is also one such company that is going to halt its trading services in India. In this blog, I will be highlighting why Zebpay had to stop its services and how it will affect the market and also, why India is not so keen towards cryptocurrency.

Zebpay is renowned name when it comes to cryptocurrency exchange platform in India. The company is an app-enabled bitcoin wallet provider. It has its head office in Singapore, and its IT office is in Ahmedabad, Gujarat.

The company was initially named Bysellbitco.co.in which it was later renamed as Zebpay. Though the company started quite recently, it became a huge success in the market and touched the whopping number of 300,000 and 400,000 users every month in the year 2017.

How did it come to an end?

Some of the prominent names that got affected because this decision includes: Zebpay, Koinex, WazirX and Unocoin. To survive in the market, these companies tried shifting their operation to crypto-to-crypto and peer-to-peer trade. But, the government ban on cryptocurrency and announcing it illegal has affected their business drastically. Thus forcing many of the businesses to shut down their business.  Zebpay is not different; the company had to shut down its business in India.

Why is India not inclined towards cryptocurrency?

An important question that arises after the stringent decision of Government of India banning the cryptocurrency is why India is not inclined towards this new financial revolution. Well, there may be some reasons accounting for the same. Some of the prominent ones that I could think about include:

Thus, we see that various bottlenecks need to be sealed before trusting cryptocurrency and making it an integral part of the mainstream economy. However, this certainly doesn’t mean that India is not working towards Blockchain. There are various companies which are working on exploring various uses of Blockchain. States like Hyderabad have already adopted this technology and is trying to implement the same in real estate. Blockchain and cryptocurrency are still at a very nascent stage. The more opportunities it holds for future; at the same time, it also has its own sets of challenges which need to be addressed before entirely relying on it.

What can Blockchain do for Helpless Farmers?
Scroll to top