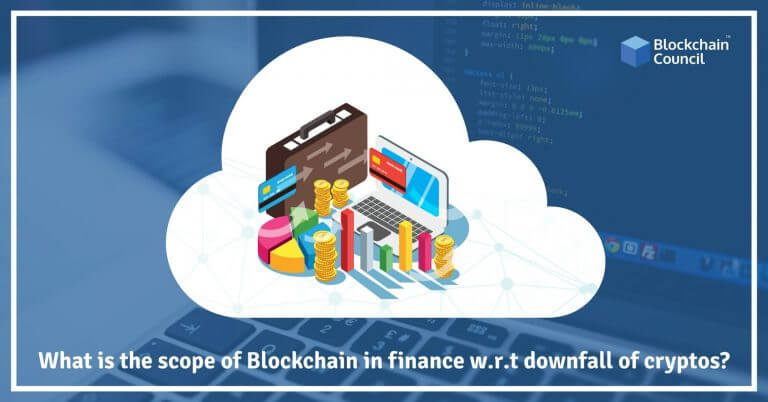 Cryptocurrencies have had an eventful week with the anticipation of the Bitcoin Cash chain split plunging the market into new lows for 2018. The sudden fall in cryptocurrencies has led several people to question the future of blockchain technology in the world of finance. The biggest ICOs from 2017-18 are still developing their products and are far from their release, so the current drop has certainly shaken the trust in the cryptocurrency market. Can Blockchain Technology remain relevant and make an impact in finance without cryptocurrencies?

As the name suggests, a blockchain is a series of blocks linked together according to a consensus protocol. The consensus protocol ensures that all of the network participants agree upon the same shared ledger. The blocks contain transaction data, and the data is freely available to all the network participants. This makes blockchains the next step in the world of accounting as it improves upon double-entry bookkeeping, a technique that was developed over 700 years ago by Italian merchants. The shared ledger combined with the power of smart contracts opens up a world of applications in finance which was not possible until now.

Smart contracts can help us create advanced financial instruments that can form the basis of the next generation of credit arrangements. Collateralized loans without going through a centralized bank in virtually any part of the world can improve the credit availability for a large number of people in developing countries. Using a shared ledger to facilitate loans backed by mortgages could help keep the process fair and prevent the kind of bubble that resulted in the financial crisis of 2008. Smart contracts have enabled for the first time in the history to create programmable money. By keeping the money in check using smart contracts, we can prevent big banks and corporations from going bankrupt because of human malfeasance which costs billions in taxpayer money for bailouts.

The banking sector stands to gain a lot by replacing their outdated systems for settling transactions with the newest offerings from the likes of Ripple and its competitors. Ripple is designed to be a high throughput blockchain which could handle upwards of 1500 transactions per second. Ripple achieves this by sharing the authentication privileges with a limited number of trusted nodes that can be run by banks themselves or public institutions such as universities. This gives banks with official records of asset ownership as the authenticators are legally responsible for processing transactions honestly. Switching over to Ripple’s xRapid service could help expedite their transaction settlements many times over while at the same time reducing their costs by over 40%. Ripple’s two main offering for bank-to-bank transfers are xCurrent and xRapid. xCurrent similar to the SWIFT messaging system and allows for settlement in cross-border payments but still requires traditional banking accounts to be held by participating banks. The real benefits of blockchains can, however, be seen in the xRapid system which utilizes Ripple’s native XRP token. xRapid significantly improves speed and reduces costs for cross-border payments by using XRP as a bridge asset between currencies thus eliminating the need for traditional banking accounts.

By 2018, blockchain technology has certainly gained enough footing in the financial and banking industry that they can function independently of cryptocurrencies. However, when employed a handful of corporations for profit, blockchains lose one of their most significant advantages that brought them to the forefront of the fintech revolution – decentralization. Bitcoin has value not because it is free of any government backing; not despite it. Therefore, the benefits of decentralized trust are only there if cryptocurrencies continue to operate without meddling from governments or corporations.

Famous Personalities who are Lured into Blockchain Technology
Scroll to top