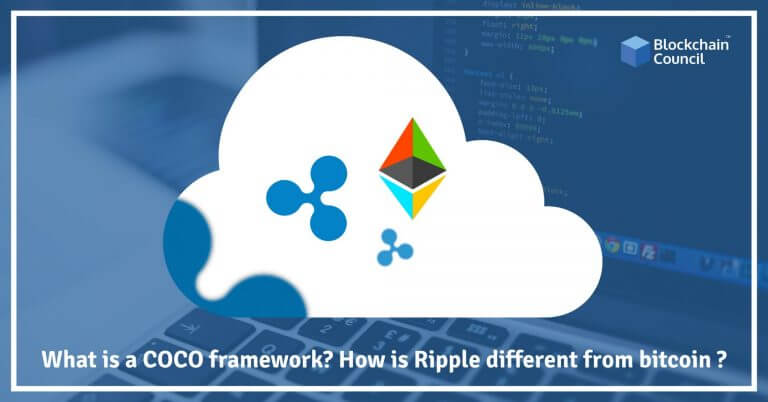 Microsoft has released the Confidential Consortium, also called the COCO framework to make the Ethereum or Bitcoin blockchain actually usable for businesses. The COCO Framework brings a much-needed scalability upgrade to Ethereum and boasts of handling more than 1000+ transactions per second. Therefore, the COCO framework combined with the Ethereum blockchain provides a secure and transparent way to digitally track the ownership of assets across different platforms. Another cryptocurrency that can handle transactions in the range of 1000+ transactions per second is Ripple. Let’s take a look at how the two technologies compare and how RIpple is different from Bitcoin.

Basics of the COCO framework

In the blog post announcement of COCO framework, Microsoft Azure CTO Mark Russinovich introduced the basic features of COCO and showed how it can be used in actual businesses. In the blog post, Russinovich said that the COCOFramework is an open-source system that enables high-scale, confidential blockchain networks for enterprise-grade solutions. COCO framework is blockchain agnostic and can be coupled with any blockchain to provide a means to accelerate enterprise-level adoption of blockchain technology. Coco achieves this by designing specifically for confidential consortiums, where nodes and actors are explicitly declared and controlled, similar to how Ripple operates. What this means is that the network participants are securely chosen from among the node operators resulting in a Trusted Execution Environment (TEE). The basic idea here is that you have a trusted box on which you can trust to put your blockchain code. This trust is ensured using tools like Intel’s Software Guard Extensions (SGX) or Windows’ Virtual Secure Mode.

The true power of COCO is realized once these trusted enclaves or TEEs are set up. Since there is internal trust in the system, there is no need to perform additional proof of work. Because of the consensus mechanism like Proof of Work, traditional blockchains like Bitcoin can handle, at most, 3-4 transactions per second. But with the enclaves, trust is not an issue, and Microsoft says Coco and Ethereum can handle up to 1,600 transactions per second in its prototype setup. This is really important for businesses, as high latency and throughput are fundamental components of any successful software tool.

In practise, that means that COCO provides the following key upgrades to the Ethereum blockchain:

Differences Between Ripple and Bitcoin

Ripple is another high performing blockchain which works on a similar idea to the COCO framework – that of trusted enclaves. Ripple has a very clear goal –  it wants to become the standard for cross-border payments and remittance system for banks and payment networks. Ripple provides a system for direct transfer of assets that are settled in real time. Ripple has demonstrated that it can handle up to 1500 transactions per second on its trusted enclaves. The reason that Ripple is able to reach such a high throughput is that unlike Bitcoin, it is not decentralized.

With Bitcoin, competing nodes perform complex mathematical operations to validate the network by performing Proof of Work. Ripple, instead, relies on trusted hosts like University Servers and Bank Servers who are responsible for maintaining and securing the network. Therefore, it is much more centralized compared to Bitcoin. But with centralization come the huge benefits of higher throughput as a lot of the overhead computation is avoided.

Other key differences include:

What is the Komodo BarterDEX?
Scroll to top