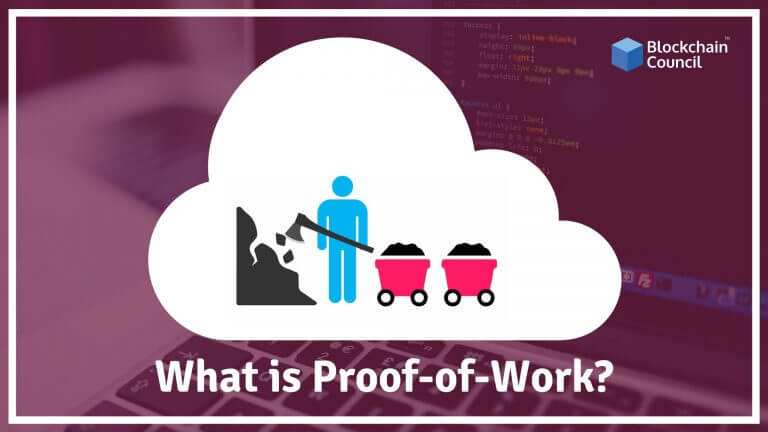 A proof-of-work is a piece of data which was very difficult to produce as it is a very time-consuming process in this digital era. This is mainly created to satisfy certain requirements. This process always goes through a verification process to know whether the satisfying data requirements are up to the mark.

What is Proof-of-Work from Blockchain Council

The process of making proof-of-work happens in a random process with low probability. This is because lot of trial and error requires no average before generating a valid proof of work. Bitcoin uses the hash cash proof-of-work.

One application of this idea is to use hash cash as a method of preventing email spam, requiring an evidence of work on the email’s contents including the to address, on every email.

Legitimate emails will be able to do the work to generate the proof quickly without that much of work. This mainly requires a single email, but in the case of mass spam, emailers will have difficulty to generate the necessary proofs which would require massive computational resources.

Hashcash proofs-of-work in Bitcoin helps for block generation. The blocks that need acceptance needs the Proof-of-Work that shows the data of each block. The difficulty of this job is to mine bitcoins. It is adjusted to limit the rate at which new blocks can be generated in the network every 10 minutes.

Due to the very low probability of successful generation, this makes it unpredictable which worker computer in the network will be able to generate the next block.

For a block to be valid it must hash to a value less than the current target. This means that each block indicates that work is done generating it. Each block contains the hash of the preceding block. Thus each block has a chain of blocks that together contain a significant amount of work.

Changing a block happens by making a new block containing the same predecessor which requires regenerating all successors and redoing the work they hold. This protects the block chain from tampering.
Bitcoin introduced the most widely used proof-of-work scheme – SHA-256. Some other hashing algorithms that help for proof-of-work include scrypt, Blake-256, CryptoNight, HEFTY1, Quark, SHA-3, scrypt-Jane, scrypt-n and combinations.