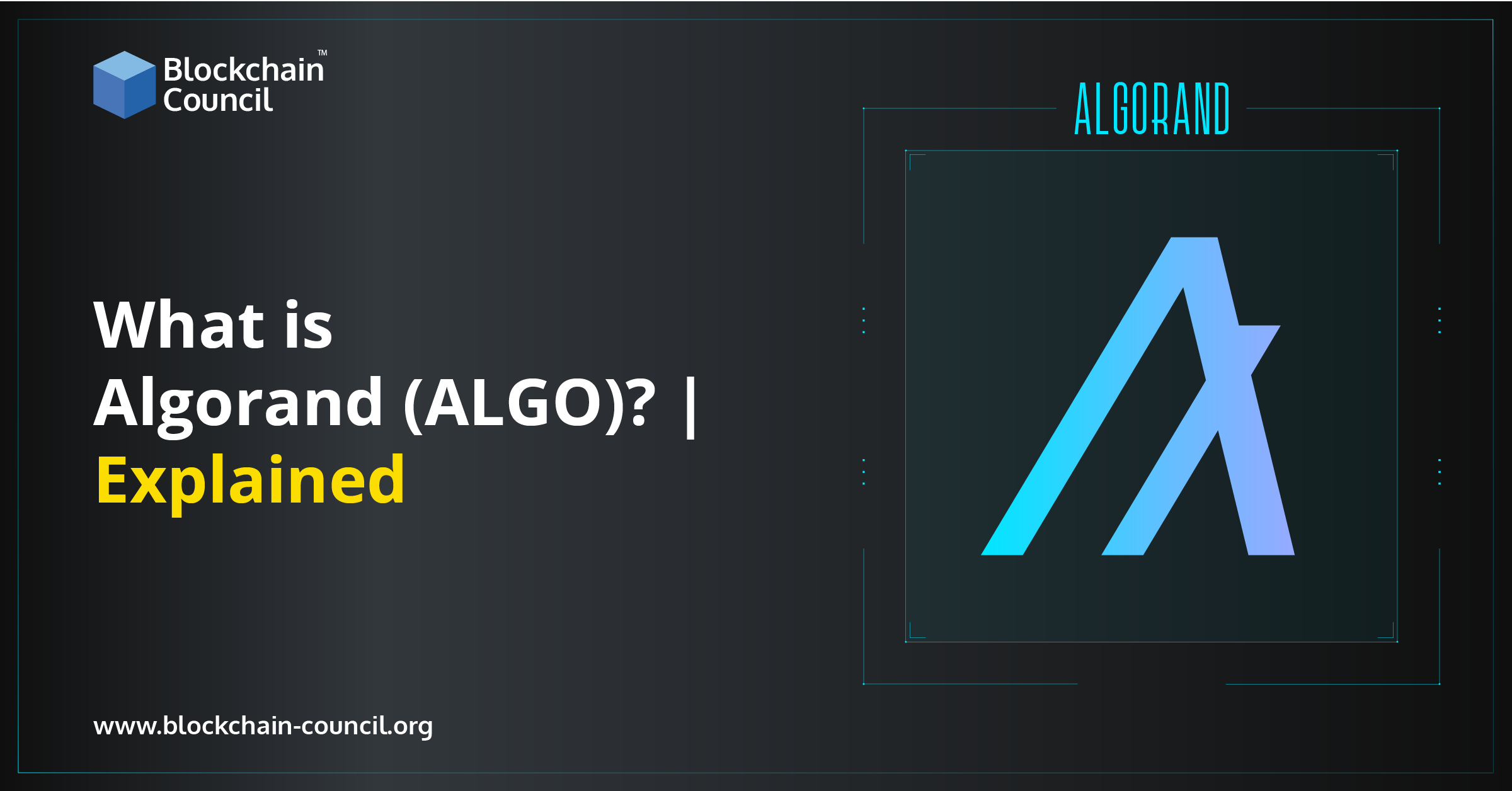 Algorand is one of many recent attempts aimed at expanding the potential applications of bitcoin. It will speed up transaction processing and reduce the time it takes for transactions on its network to be deemed complete. Algorand, which debuted in 2019, attempts to achieve these qualities by reinventing the mechanism of traditional cryptocurrencies. Everyone who owns money in their wallets can claim an ALGO coin. Further, Algorand adds this to its economy with each new block.

Algorand (ALGO) is not only a blockchain medium but also a visual currency. It functions similarly to a large payment processor such as Mastercard or Visa, which can quickly process many transactions. Algorand is an immediate competitor to Ethereum since it can hold different cryptocurrencies. The platform’s aboriginal currency is ALGO. It is utilized to pay fees and other expenses for ALGO-based trades and secure the Algorand blockchain. Anyone can have a hand in the Algorand code, as it is an open-source medium. Algorand’s operational mechanism is pure proof-of-stake (PPOs), which uses ALGO token holders to recruit network operators.

Understanding what algorand is is quite interesting! The Algorand blockchain is protected using the local currency, which is also used to pay transaction fees for ALGO-based transactions.

Silvio Micali, a cryptographer, and lecturer at the Massachusetts Institute of Technology, invented the Algorand platform and coin in 2017. ALGO’s total quantity is set at 10 billion coins, with around 7 billion now in circulation.

The platform’s aboriginal currency is ALGO safeguards the blockchain. Moreover, Algorand does it in a decentralized manner by:

As a part of the network, the nodes of Algorand vote then verify the latest blocks.
The data load inducted into Algorand’s community is lessened by continually reducing the blockchain information.

Understanding The Difference Between Algorand And Ethereum

Ethereum and Algorand, two blockchain platforms, might be considered competitors. Both platforms leverage smart contracts and provide infrastructure to allow the creation of new blockchain-based projects.

One of the main distinctions between Algorand and Ethereum is the consensus technique employed by the blockchain. To “mine” new currencies and perform transactions, Ethereum employs the POW, i.e., proof-of-work procedure, which necessitates a significant amount of processing ability and power. This way, new coins are mined. Ethereum is progressively adopting the most widely used proof-of-stake method, requiring blockchain network participants to join as validators. But, Algorand persists in using POS, i.e., proof-of-stake. A fresh block of trades is exercised every 13 seconds by the Ethereum medium. The Algorand network allows transactions to be completed in less than four seconds.

Algorand has a one-of-a-kind two-tiered blockchain architecture. Smart contracts, asset creation, and atomic asset exchanges are all supported by the foundation layer. These operations occur on the Algorand blockchain’s Layer 1 layer, ensuring security and compatibility.

Individuals can build ASAs that depict fresh or already present tokens on this initial level of the Algorand blockchain network. This is the same way ERC-20 tokens work on the Ethereum network.

The Algorand Block Production Under PPoS

Production of Algorand Blocks Algorand employs a Proof of Stake variant called Pure Proof of Stake under PPoS. (PPoS). It is a positively decentralized Proof-of-Stake harmony technique in which solely a single ALGO token is required to participate in and protect the network. Ethereum 2.0, on the other hand, necessitates a 32-ether (ETH) minimum investment, putting consumers at a severe disadvantage.

A block moderator is chosen to present the existing block during the submission process. Only the block supervisor knows they’ve been assigned to propose a block because they’re appointed in secret using their private participation key. The Veriable Random Function (VRF) delivers cryptographic evidence that permits the block supervisor to smoothly and verifiably establish their position as the present block supervisor. This strategy enhances network safety by preventing hostile players from determining beforehand who the block supervisor will be. It is less likely that a network could be compromised by targeting a block leader.

Following the block proposal, we move on to the voting stage, where Participation Nodes are selected at random to serve on a committee to ensure that the current block is free of double-spends, overspends, and other concerns. If malicious behavior is detected, the network switches to recovery mode, which involves destroying the block and electing a new block leader.

Algorand does not slash, which is a point of contention. How to stake algorand is a common aspect of crypto. This means that a node’s staked balance cannot be lowered due to proposing a faulty block.

Two blocks just can’t be submitted for the identical slot at the same time using this technique of block generation, guaranteeing that the blockchain never forks. When a block occurs, it has already gained a consensus, and users may immediately trust it, lowering network latency.

How To Buy Algorand?

The question of where to buy algorand nft is quite common. ALGO is available for purchase on major cryptocurrency exchanges such as Kraken and Coinbase. You can place an ALGO buy order after signing with any cryptocurrency exchange and finance the wallet with your native money. After the transaction is completed, you can keep your ALGO in either a self-hosted or exchange-hosted wallet.

How can I buy Algorand in an easy, safe, and smart manner?
Step 1: Locate a hardware wallet that is Algorand compatible.
Step 2: Use an exchange provider to purchase Algorand.
Step 3: Move your Algorand to a hardware wallet.

Why Does Algorand Have Value?

Because Algorand is a brand-new public blockchain, its cutting-edge technology has yet to be properly tested in real-world market environments. Algorand is bringing new technologies to the forefront; that will make the blockchain smoother for the developers, thus helping them to build unique DApps.

When an investor believes that POS will outperform POW, as it reduces the involvement expenses required in a blockchain’s operation in the long term; Algorand could be a good fit for their cryptocurrency portfolio in that situation.

According to the Algorand Foundation, a non-profit organization that controls and funds the protocol’s development, only 10 billion units of the ALGO coin will ever be issued.

The number of coins in circulation is tracked via Algorand’s block explorer. The following is a distribution timeline that the foundation anticipates being completed within five years of the protocol’s launch:

The Algorand Foundation has also released more information on how payouts function and when users may expect to receive new monies for their blockchain participation.

The Potential Use Of Algorand

Many organizations rely on algorand crypto, including startups, banks and financial institutes, fintech, and defi. The thriving community generates a thriving ecosystem of firms that share Algorand’s long-term financial vision.

Use cases that have been highlighted are listed below, and additional ecosystem members can be located here.

Assume that investors believe that proof-of-stake will beat proof-of-work blockchains in the long run because they decrease the expense of partaking in a blockchain’s function. Algorand’s public chain will improve Props’ speed and reliability, allowing for increased transaction volume and security.

AIKON has shook hands with Algorand to present an ORE ID safe blockchain solution to the blockchain of Algorand, allowing the community of developers and individuals to embrace Algorand faster.

AIKON will also provide an Algorand plugin in ChainJS, their open-source blockchain development toolkit, making it easier for businesses and dapps developed on other chains to transition to Algorand. The Algorand infrastructure has the necessary scale to handle many low-cost transactions.

RHOVIT, a gamified content platform, has partnered with Algorand to offer easy and affordable crypto mining as well as a better revenue model for content creators. RHOVIT will leverage enterprise-grade scalability and best-in-class innovation to provide users with mining and earning tools as well as innovative ways.

Meld Gold by Algorand converts gold into a digital asset.

Assume that investors believe that proof-of-stake blockchains will beat proof-of-work blockchains in the long run because they lower the cost of participating in a blockchain’s operation. Meld Gold chose Algorand as the finest platform for connecting all aspects of the gold market, including bringing suppliers, dealers, and purchasers to where they want to sell their assets.

Algorand and SFB Technologies are bringing the world’s foremost nationwide virtual currency to the Marshall Islands.

Algorand technology will be used to build the blockchain for the Marshallese sovereign (SOV), the world’s foremost nationwide digital coin. The Algorand protocol was chosen because of its speed, scalability, and security and its capacity to implement requisite compliance measures successfully and transaction finality for a national currency.

FlexFinTx: A Decentralized Self-Sovereign Identity Algorand is a great place to start.

FlexFinTx’s ‘FlexID,’ a self-sovereign decentralized identity, has been constructed on Algorand’s public blockchain, solving one of the most significant barriers to participation in a Borderless Economy: identity.

Despite being a newcomer to the crypto era, Algorand has quickly established itself as a strong medium with significant technological invention, creators community support, and use cases based on real-world. Algorand is setting a new standard in blockchain with its incredibly equitable coin rewards system and consensus technique, and the company’s future are bright.

Everything You Need To Know About Moonbirds NFT
Scroll to top