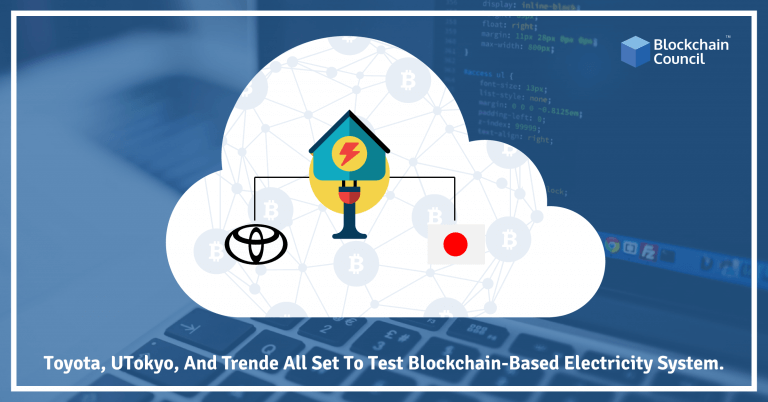 In a press release on 23 May 2019, it was revealed that Japanese car manufacturer, Toyota, University of Tokyo, and online renewable energy retailer Trende Inc. plan to conduct tests for a blockchain-powered electricity system. The pilot test is scheduled to be conducted on 17 June. The pilot will include testing a peer-to-peer electricity system which will enable electric vehicles, enterprises, and homes connected to the power grid to trade electricity using blockchain.

Toyota Motor Corporation (Toyota) conducts business in the automotive, finance, and other industries. Toyota vehicles are sold in approximately 190 countries and regions. It markets its automobiles in countries such as Europe, Asia, Japan, and North America. It competes with major players such as Hyundai, Renault, Ford, Volkswagen, and Peugeot.

With Japan’s national electricity supply system remaining in a transitional state, this transition will entail a shift from its traditional large-scale consolidated system to a system which is distributed. This would allow business owners and individuals to be the owners of their power supply. For this pilot test, an electricity trading agent and an AI-powered electricity management system will be installed on the premises which can be accessed by all participants.

As claimed by the press release, this pilot is the first test conducted for a distributed electricity trading system which will encompass solar panels, secondary batteries, and plug-in hybrid electric vehicles (PHEVs).

The University of Tokyo, established in 1877, is credited as being the first national university in Japan. It is a leading research university which offers both undergraduate and graduate courses in all academic disciplines. It provides a rich and conducive educational environment which aids in the intellectual development of students.

The AI-based electricity trading agent will help in placing buy and sell orders on the exchange on behalf of participants. This will be done based on the electrical consumption and calculated forecasts of power which will be generated at their premises by solar panels. The aims of these measures, as stated in the press conference, are verifying the economic advantage of having “electricity consumers and prosumers trade electricity through market transactions,” and of using algorithms for predicting PHEV demands.

Trende Inc. is a renewable energy retailer which is involved in selling electricity to residential customers in Japan. It operates online through service websites such as Ashita Denki and Hot Denki. With these service websites, it is looking to accelerate solar power adoption in Japan. At this point, it is looking to leverage blockchain technology by creating a marketplace for those who produce and consume renewable energy.

In the press release, a prosumer was defined as being a coinage for “an electricity consumer who is also a producer of electricity using self-owned power generation equipment.”

As commented by the team, “As distributed power supplies such as solar panels, secondary batteries, and electric cars become increasingly widespread, Japan’s electricity supply system is in a transitional state as it shifts from its traditional large-scale consolidated system to a distributed system by which individuals and businesses own their power supply.”

Other major automobile manufacturers such as General Motors and Honda have announced their plans for a joint research initiative into smart grid interoperability and electric vehicle using blockchain.