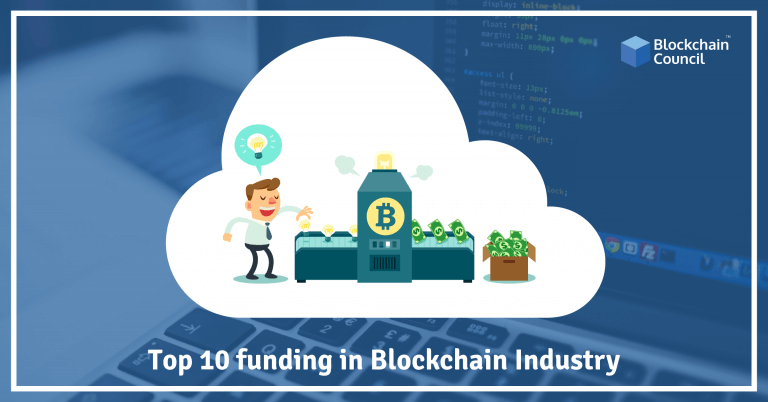 Since the summer of 2017, the blockchain industry has seen an ever-increasing amount of investment, both from the individual investor as well as institutional investors. With dozens of Initial Coin Offerings or ICOs every month, it could be hard to keep things in perspective. So here’s a list of top 10 biggest fundings in the blockchain industry to sort through the mess.

FileCoin conducted the largest ever ICO in the world in August 2017, raising over $257 million largely from accredited investors. FileCoin is one of the most anticipated cryptocurrency projects in the works and is still not available on any exchanges. FileCoin is trying to create a new layer of data storage on the internet by facilitating peer to peer exchange of services. With FileCoin’s model, users would be able to get paid in FileCoin token for letting the service store data on their hard drive. In effect, this would mean people and services would be able to safely store data for a fraction of the price compared to other file hosting services.

Tezos is the other big cryptocurrency project that has seen the most amount of funding in the cryptocurrency space. Tezos conducted its ICO in July 2017 and raised a whopping $232 million. Its native token, XTZ, just hit major exchanges and has seen some serious volatility in its price. Tezos has garnered so much interest from the investors because of its unique value proposition – it brings the best parts of Ethereum and Bitcoin together and makes them even faster. Tezos can support over 1000 transactions per second and has a very adaptive consensus mechanism. That means that it would be easier to upgrade Tezos over time without having to worry about a chain split.

EOS, referred to as an Ethereum killer since its inception, raised $180 million over the course of its year-long ICO as it promised a number of improvements over its rival Ethereum. EOS claims to have parallel execution of contracts that could support enterprise-grade applications like a decentralized version of Wikipedia. Additionally, EOS is expected to significantly improve the throughput of the network by organizing the network into various clusters.

Sirin Labs raised $157 million in its ICO in December 2017. Their goal is to develop a much more secure mobile device ecosystem called FINNEY for the average user. FINNEY devices form an independent blockchain network, a distributed ledger both scalable and lightweight. FINNEY devices are much more secure because they do not rely on a centralized service to function and are capable of providing fast, fee-less and secure transactions.

Bancor raised over $150 million in its ICO in June 2017. Bancor’s value proposition is to build a liquidity platform that would allow for anyone token to be swapped for another atomically. Bancor has garnered so much interest from investors because atomic swaps have been one of the most appealing aspects of cryptocurrencies because they allow people to bypass centralized exchanges. Bancor is hard at work developing their core algorithm and is expected to launch in Q2 2019.

Status instant messaging platform raised $108 million in its ICO in June 2017. The Mobile Ethereum OS, the Status platform allows a user to browse, chat and make Ethereum payments on its platform. Status’ main appeal lies in its ability to bring Ethereum’s decentralized applications to its accessible mobile application.

Qash raised $105 million in its ICO in November 2017. Qash’s Quoine Liquid Platform is aiming to become the world’s largest liquidity pool that can be shared between various exchanges. The Liquid Platform supports a Matching Engine, Smart Order Routing, and Cross Currency Conversion Engine technologies. It becomes the ultimate resource for traders – a multi-market order book that combines every liquidity source in the world into a single highly liquid tradable order book, in any currency a user chooses.

Aragon is one of the early adopters of ICO funding which raised $73 million in its ICO in May 2017. The Aragon platform is focused on making organizations more governable using blockchains. This makes Aragon organizations more efficient than their traditional counterparties. By making it possible for everyone in the world to organize, Aragon is enabling the borderless, permissionless creation of value.

Bankex raised $70 million in its ICO in December 2017. Bankex is developing a new tokenization technology that uses the blockchain technology to offer an advanced Proof-of-Asset protocol for the financial markets. By using Smart Contracts, BANKEX may digitize various types of assets like portfolios including real estate, ensures that the asset is validated, turns it into a token, and places it on the market for trading.

TRON raised $70 million in its ICO in September 2017. TRON is a blockchain based token for the world entertainment industry. TRON allows for tokenization for various kinds of media that can be consumed online and uses smart contracts to ensure that content creators are paid fairly for their work. TRON supports various kinds of blockchain networks and smart contract systems, including Bitcoin, Ethereum, EOS, and Qtum.