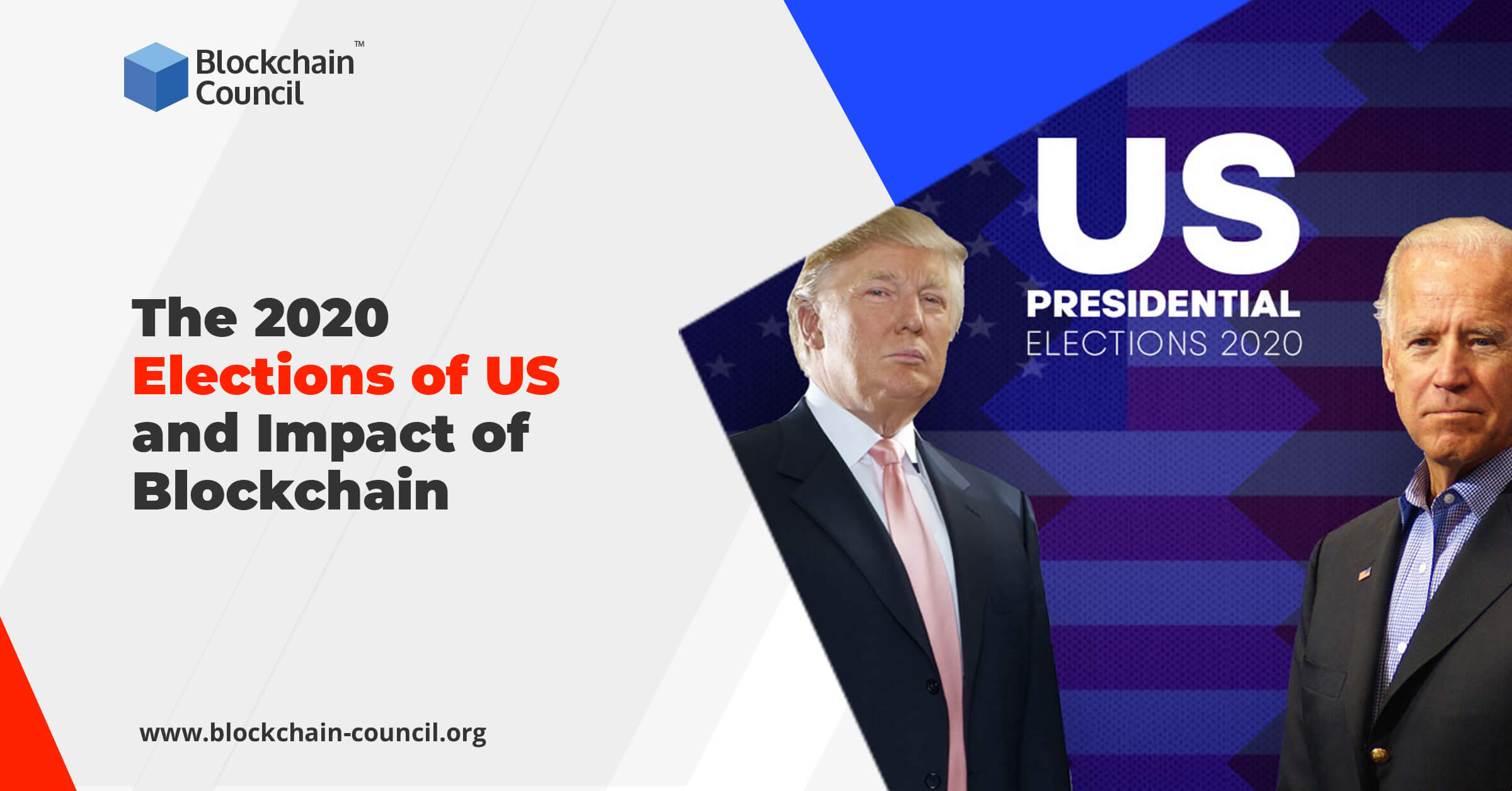 Are you also excited about the controversial 2020 Elections of the US? Wondering what role Blockchain technology is playing in such elections? We have got you covered.

Role of Blockchain in Elections

As we know, voting cannot be fully trusted. Whether it is traditional voting or an online one, they are subjected to various issues. Traditional voting is often subject to corruption if there are paper votes or phishing malpractices in online voting. But with the rise of Blockchain applications, voting has caught the attention of the US Parliament. Many experts vouch for Blockchain’s role in voting as the architecture offers immutability, security, and privacy. Implementing Blockchain-based online voting brings not only transparency but also decreases the cost of hosting an election.

In May 2020, an announcement was made stating that the US Congress is considering implementing a voting solution with Blockchain technology to allow remote senate voting amid the COVID-19 pandemic.

The topic of the 2020 US presidential election is booming the scope of crypto adoption and Blockchain.

Looking for the best Blockchain certifications? You are just a click [email protected]

According to the recent announcement by Coindeck, Polymarket, a decentralized information markets platform, had more than $2.8 million worth of bets placed on whether Trump will win the 2020 US presidential elections or not. Polymarket is a decentralized betting platform that allows users to place a crypto bet based on the most-highly debated current affairs and public topics.

Polymarket has the ability to aggregate combined knowledge and provide the general public with a fair source of truth in regards to the possibility of certain events happening in the future. This decentralized platform is a key application of decentralized finance(DeFi), which allows users to perform instant transactions without involving any third-party intermediaries.

Shayne Coplan, the founder of Polymarket, shared that people who are not even crypto native users are using this platform.

Another trending crypto betting platform that has launched its election battle is ‘YieldWars,’ which has attracted over $50,000 bets. The platform ensures that users can stake either the platform’s native $WAR token or $ETH, and once a bet is placed, it can’t be unlocked.

Influential US Lawmakers in the Crypto Space

Jo Jorgensen, a senior lecturer at Clemson University, also mentioned multiple times on Twitter that she is a fan of the Bitcoin protocol.

Brock Pierce is known for his effort to create a crypto-friendly community in Puerto Rico. He is known to hold a special place in crypto development. He co-founded Realcoin, which eventually became the Tether stablecoin, and later, he launched Block.One, which is the company behind the EOS Blockchain.

Sen. Tom Cotton chairs the Senate Banking Committee’s economic policy subcommittee. Previously, he has made statements supporting the regulation of cryptocurrencies in light of concerns about their use in illicit activities. A few months back, in July 2020, he mentioned that he sees the digital dollar as a tool for economic supremacy.

The 2020 election of the US is one of the most debatable topics in decades. Blockchain represents a new model for applications in the fintech domain and beyond, and voting is no more an exception.

The news agency, Associated Press, is publishing incoming results of the 2020 US Presidential election onto Ethereum and EOS Blockchains. Apart from that, the news agency has also released the Ethereum smart contract address that enables readers to use Etherscan to track results as they come in. However, it was mentioned that a more open version of the findings is available via AP’s EOS account on Bloks.io.

As of now, the results are in Joe Biden’s favour.

Without a speck of doubt, the future of voting is a purely digital electronic system that can add value to the election process. But conducting elections using Blockchain can bring in several problems. The first problem to tackle is the block finality time as the time taken varies from a few seconds to a few hours, depending on the system used. Longer confirmation times may increase the possibility of double voting. Moreover, there is a risk of voters who are not technology-savvy as they may get left out of the election process.

Want to gain an in-depth knowledge of Blockchain technology and become a Certified Blockchain Expert? Check out Blockchain Council now!