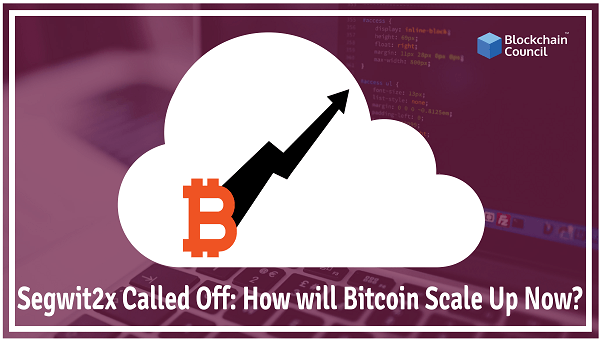 Now that the scheduled SegWit2x hard fork is dead in the water, we are taking a look at what the future holds for Bitcoin and the different scaling techniques that are in the works.

There are already some services that are using off-chain solutions to leverage the benefits of fast and free transactions. Coinbase is the biggest example of a trusted third-party that lets users on its platform transfer Bitcoin from one address to another without on-chain transactions. Coinbase lets its users’ transfer Bitcoins between its addresses without any on-chain records. However, this method of transferring it requires a lot of trust between all the users of a service along with the trusted third-party which is facilitating the exchange.

The two main on-chain scaling solutions that have been employed by the Bitcoin Core and Bitcoin Cash are different approaches to increase throughput by either utilizing the existing block space more efficiently or by increasing the block size altogether.

Bitcoin Core’s approach is to keep block sizes fixed at 1 MB while reordering transactions to make blocks less full than they are right now allowing for more transactions per block. This scheme referred to as Segregated Witness is the on-chain scaling solution which makes transactions more efficient while keeping the block sizes small to keep Bitcoins more decentralized.

The main drawback of taking this route is that Segwit changes the way transactions are stored fundamentally and also that it only slowly reduces the current backlog of the Bitcoin network as more and more wallets and services upgrade to SegWit addresses. The advantage is that it is not a temporary fix but possibly a long-term solution to a problem of redundancy that existed in the Bitcoin protocol since its inception.

The other approach, employed by Bitcoin Cash, is to keep transactions as they are while increasing the block sizes to 8 MB. The major benefit to this approach is that it instantly cleared the large backlog of transactions that had accumulated on the Bitcoin Memory Pool and thereby enabling fast and cheap transactions. The major drawback is that it is only a temporary solution that will work until the network load increases, after which it’ll again slow down like the current Bitcoin network. Making blocks bigger also makes it harder for small users to run their independent node, thereby making the mining power concentrated in a few large corporations.

While it’s still too early to say which is the ideal scaling approach for Bitcoin to take, we can be sure that both on-chain and off-chain have unique features that lead to better performance for it. Now those small blockers and big blockers have officially separated into Bitcoin Core and Bitcoin Cash; we can observe these two experiments and let the market decide as to which is the most effective long-term scaling solution.

What is Litecoin?
Scroll to top