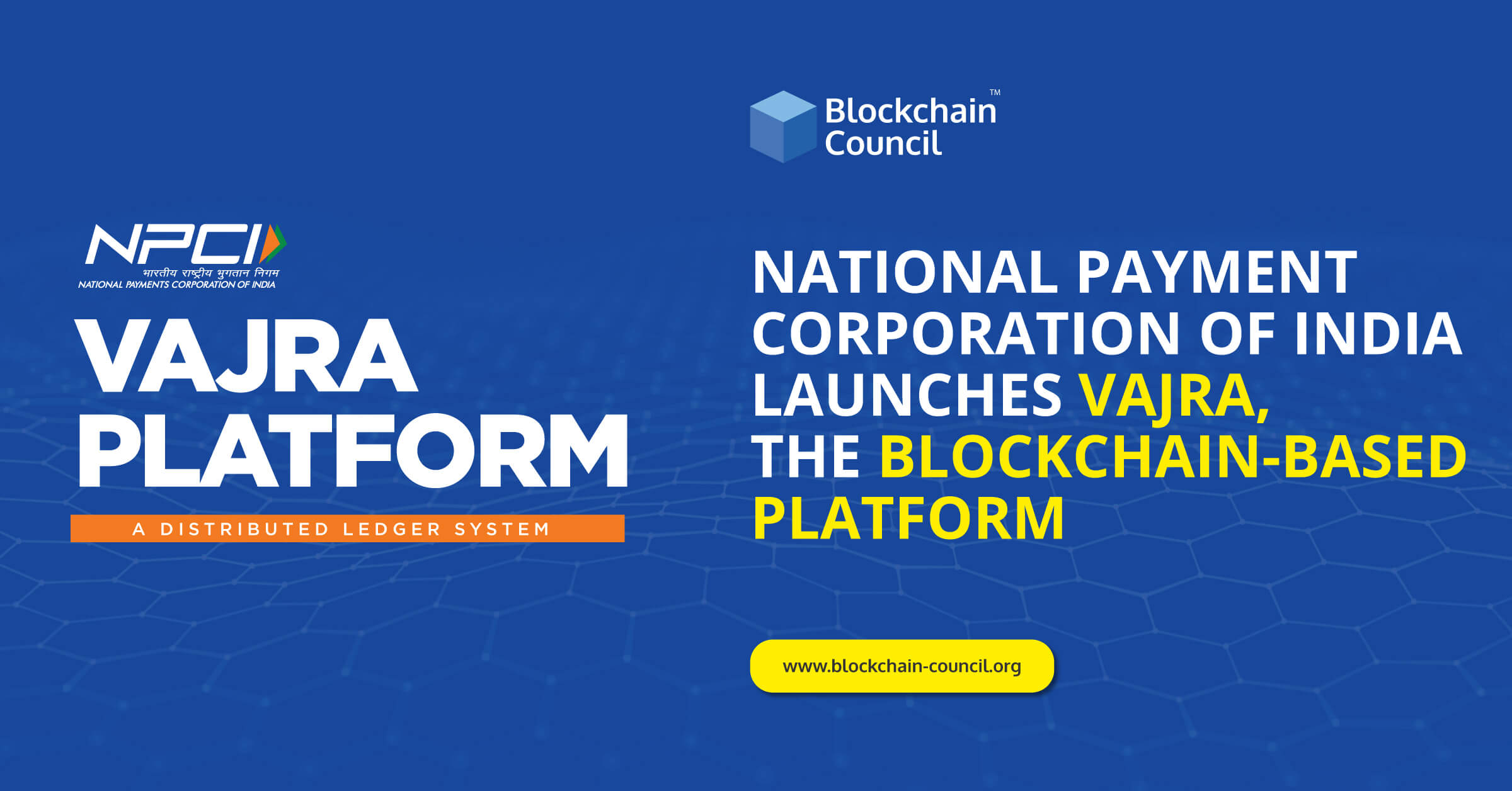 As most of us might be aware, the Indian Government is still uncertain about using cryptocurrencies. NPCI or the National Payment Corporation of India announced the launch of Vajra, the permissioned blockchain platform. This has been developed primarily for making payments faster, easier, and transparent.

By carrying out careful and detailed research, NPCI has developed this distributed ledger technology mechanism for providing a tamper-proof and highly secure database for supporting several payment procedures. NPCI or the National Payment Corporation of India is an umbrella organization that was created to offer a robust Payment and Settlement infrastructure in India. Its primary focus is on bringing about innovations in the retail payment systems by using technology to widen the reach of payment systems and achieve efficiency in operations.

Currently, NPCI has 56 banks as its shareholders and is supported by ten banks, and the names of some of those banks are Punjab National Bank, Canara Bank, Union Bank of India, ICICI Bank, HDFC Bank, etc.

It is a permissioned blockchain platform meaning that only registered parties under a network administrator can be part of the blockchain network. The three nodes of the Vajra platform are:

The Clearing House Node has the right to add new nodes on the platform. Every external party that interacts with the participants of the platform will be authenticated by the node. Vajra takes care of API interactions with key management and defined security procedures and security in data access.

Bank nodes get requests from APIs, and these requests are processed through the Vajra platform. The system consists of self-executing contracts in the form of smart contracts that contain the business rules. The on-chain data is added to the ledger once the request is processed successfully. The five simple steps, as mentioned by NPCI, are:

The user initiates a transaction Vajra app or MicroATM through online banking, e-commerce, or point-of-sale and the request for collection, deposit, or payment is directed to the server of the payer, payee, or the issuing bank. The nodes or banks will then receive and record the transactions on the platform using APIs, adapters, or DLT.

The smart contracts then validate and trigger transactions depending on the predefined business rules. The transactions are then recorded on the blockchain through successful clearing. As a final step, every fifteen minutes, the NPCI clears files and fees from the blockchain platform and posts it for settlement processing to the Reserve Bank of India.

Key benefits of Vajra are fast processing, transparency, data security, robust dispute mechanism, and time sensitivity. Referring to this as a good move by NPCI, Sumit Gupta, the CEO, and co-founder of the Indian crypto platform CoinDCX, further stated:

“Starting this journey on a permissioned blockchain makes eminent sense to test the network operations of different types of nodes and the transactional activities conducted by the customers. At the time when China, Uruguay, Turkey, Thailand, Sweden, France, etc. are have already started working on their pilot projects to bring their own Center Backed Digital Currencies (CBDCs), NPCI coming up with an entire payments platform which is secure, tamper-evident, and versatile is exemplary.”

Vajra deals with issues such as technical errors, declining to conduct business, and declining to process a transaction and solves the same with real-time data. As we know, data on a blockchain is stored over the public ledger in a block, and this means that every participant has a copy of the blockchain. When asked about the changes to be made by the banks for proof-of-concept, the NPCI commented as follows:

“No changes are required from the Bank infrastructure. The banks have to whitelist the Vajra adaptor IPs and ports. Banks have to generate the transaction for the corresponding banks, which are part of the POC.”

The Indian fintech industry views this development of a blockchain platform by NPCI as a positive step.