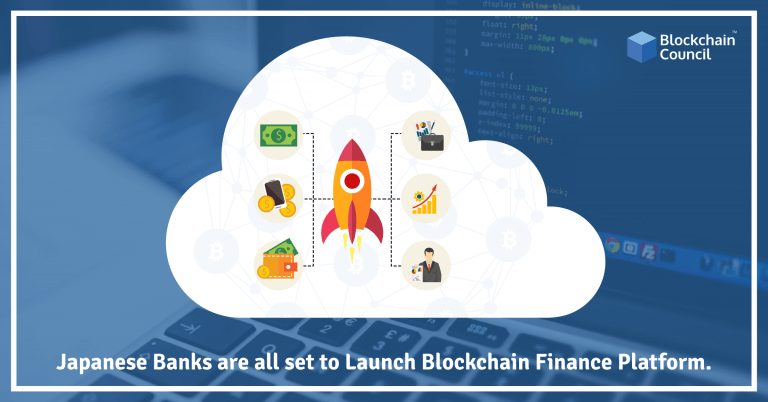 Japan is one of those nations which is highly promoting the use of Blockchain technology. It has perhaps understood the implications that this technology can have in our life and business operations. In times like today, when we need systems and technologies that can guarantee the utmost level of satisfaction and security, Blockchain has emerged as a panacea. Japan has taken many initiatives to promote Blockchain and make it a part of its mainstream business operations. Around five banks in Japan have collaborated to create a Blockchain platform that will promote Blockchain technology.

Japan’s Take On Blockchain And Cryptocurrencies

We all know that Japan has a strong foothold in the world of technology. In fact, its technology is trusted by people across the globe. The land of the rising sun is the home to support of cryptocurrency investors and users. In 2018, Japan was the second or third largest economy when we take Bitcoin into consideration. Did you know that Japanese yen 11% of global trading volume for Bitcoin?

In this blog, I will be unveiling Blockchain’s latest move in the Blockhian division. Nation’s five leading banks have come together to create a transparent system for monetary exchange.

Which Are The Five Contributing Banks?

The five major banks are :

The objective of this move is to create an electronically advanced platform that can ensure a transparent and efficient transaction. This system will be targeting an elite range of financial operations. They will be leveraging IBM’s expertise as well. IBM is one of the pioneering companies which is making huge exportation and developments in this field. They have named this platform as Fitting Hub.

This association of banks was announced in the year 2018, initially, it was planned to launch this platform last year, but now it is scheduled to launch in the month of April 2019. This partnership aims at adding more efficiency to its financial framework. As mentioned above, it will also employ IBM’s knowledge of Blockchain to make its system more efficient.

What else in Blockchain in Japan- I have already highlighted the fact that Blockchain has strongly influenced Japan and its financial sector. The above piece of news is just a glimpse of the latest transformation taking place in the nation. In addition to this, many stakeholders in the Banking industry in Japan are adopting Blockchain technology. Mizuho is planning to start-off its own cryptocurrency like Stablecoin. Daiwa – Japan’s biggest brokerage firm for securities has also announced running a test process to offer after-trade solutions. It will be leveraging this facility on the Blockchain based platform.

The Early Phase Of Change

It is not recently that Japan has shown an inclination towards Blockchain technology. In 2016k Japan announced that it would officially recognize cryptocurrency as a type of money and people can use it for making payments. In March 2016, a bill was introduced in the parliament that addressed financial technologies and mentioned that virtual currency as a part of growing domain. FSA or Financial Services Agency in Japan has officially recognized cryptocurrencies as official currency thus legitimizing this currency. This move will be built trust on Blockchain technology, making Japan a leading nation when it comes to Blockchain and cryptocurrency acceptance.

Many of the brokerages started off a consortium that promotes the adoption of Blockchain and other technologies. The objective of this is to enhance the efficiency of business operations to make customer service more effective. SBI Securities, Rakuten Securities,  Daiwa Securities, and Nomura Securities are some of the popular names that are coming together to venture into new cutting-edge technologies like Blockchain.