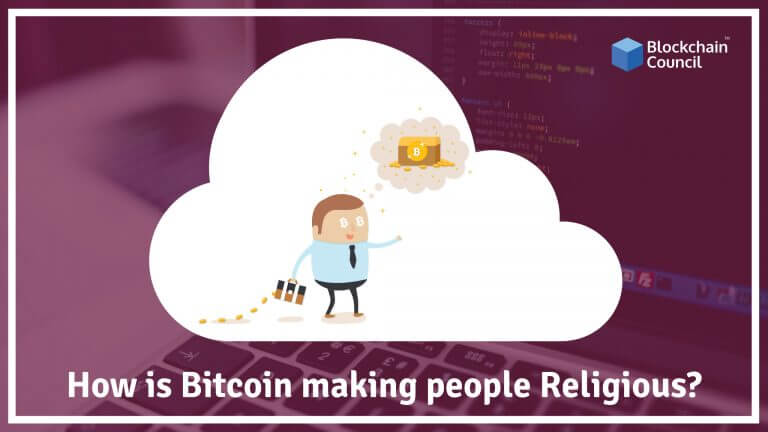 Bitcoin is a word that doesn’t need any introduction.  It is one of the most popular searched words on any of the search engines and is also the driver of financial revolution. Along with Bitcoin, blockchain technology became very popular.  Since the time of its inception, 2009, Blockchain has been in the news; despite being as low as $.0001 to the skyrocketing at $ 11,000, the story of rising and shine of this digital currency has garnered the eyeballs of many. While many believe that the story of Bitcoin would be like the tulip crisis while others believe that it is a firm belief and Bitcoin will bring transformation in the society. It will lay the foundation stone of strong work ethics which ensures, transparency and credibility.

Well, many people wonder how Religion and Bitcoin are related? The answer to this is simple; faith brings people together, it makes them believe in something strong and emerge as a strong person. Bitcoin is working in a similar direction. It is not only about a few people who fell that cryptocurrency is a right investment decision. But for some, Bitcoin has the force to remodel our society. To sum, it can be said that Bitcoin is an article of faith.

When it comes to Bitcoiners and people in the network, then there are certain things which are common across the globe, the likes of which include:-

Similar to religion, Blockchain also aims at bringing together on one platform and creating a world of equality.

It can be said that Bitcoin is a kind of vehicle which is driving towards bringing new transformation in the world. The blockchain is the technology which drives Bitcoin transaction. Many believe that Bitcoin revolution is about social innovation. Its propagators believe that this new model based on digital currency can lay the cornerstone of new business ethics and way of functioning.

Bitcoin has showcased new mode of operation for business; it has shown that using the networks of computers connected with internet can help in building business relationships and maintaining a set of shared data in the form of ledger. This ledger is visible to people connected to the network, and it is difficult to hack this data. You can say that because of Bitcoin we have different users in the network who don’t know each other but are connected together and are working together because of trust in the system and technology running behind it.

Bitcoin and its technology, has revolutionized the system. You may call it a social transformation or new religion; the terminology doesn’t matter, what’s important here is to understand the fact that the Blockchain has created a new start in the pyramid of society. This has given people a new hope of working and establishing business ethics which was not present earlier. Hence, it would not be wrong to claim that Bitcoin is a religious belief of people which has brought people from across the globe on one platform. It has given a hope to revolutionize not only the financial system but many others transformations in multiple niches.

While Bitcoin and its technology, Blockchain, may sound complicated to a few, but the idea behind this is simple, it aims to create a transparent system where money can be transferred from one person to another without any third party interference.  Thus, we now have all the reasons to believe in this technology. Although, there are people who claim it to be fraud and question its longevity in the future but, for now, this technology is growing and that too at a breakneck pace. This has brought many people together to get connected via blockchain and use it as a medium to do business.

How Can Blockchain Boost Your Business?
Scroll to top