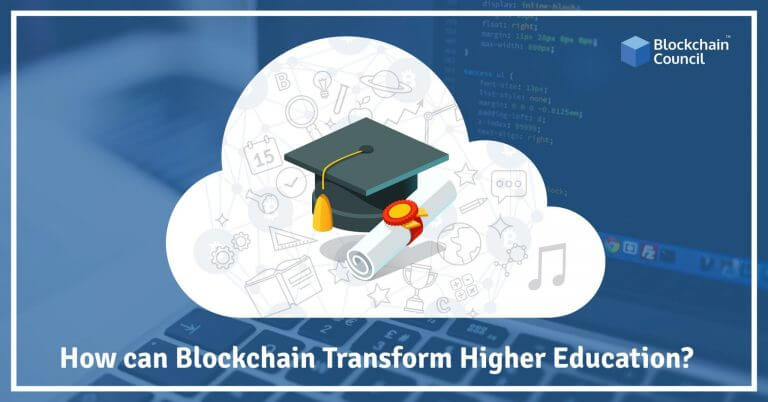 Despite scepticism surrounding cryptocurrencies, the technology behind it, Blockchain is garnering the attention of the world. The impact is so massive that almost all the industries around the globe. The Blockchain is one of the most impactful technological development in the last decade. We have seen many nations and big names in the industries focusing on using Blockchain and developing Blockchain-based applications.

When it comes to Blockchain application, then we have names like IBM, Microsoft, Amazon, Facebook, etc. trying to explore Blockchain and its application. Education is yet another sector where we can use Blockchain for various purposes. In this blog, I will be highlighting how Blockchain will transform higher education and what are the various areas of application of Blockchain. Before heading further, let us understand, what is Blockchain?

The Blockchain is a digital revolution when it comes to data exchange and storage. Although the technology started off as the base for cryptocurrency exchange, later it went on to become a self-sustaining platform that can aid any kind of information exchange including monetary transaction.

The financial transaction remains one of the key areas of focus as far as Blockchain is concerned. But, its features make Blockchain as a cornerstone for transformation across various sectors.

Well, Blockchain offers many other features, but we will be focusing on these three features and how it can be used in higher education.

It might sound a bit astounding to some that Blockchain can be used in higher education as well. But, the question arises, how is this possible?

There are various areas in academics where Blockchain and its key features can be used. Let us analyze them.

The Blockchain is a whole new world in itself. It has many things to offer us, from development to innovations. Every industry is undergoing this change, and many of these changes are triggered by Blockchain. Whether it is higher education or any other sector, the need for an efficient data store and management remains a priority, and with the help of Blockchain, we can easily achieve the desired output.