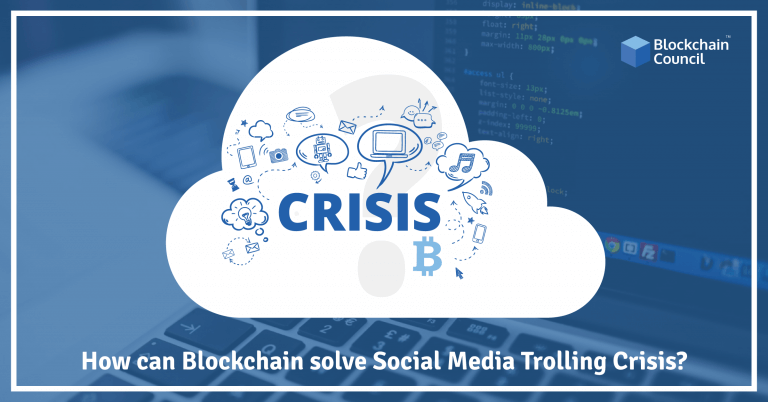 Over the last decade, as social media websites like Facebook and Twitter have risen tremendously in popularity, so has the problem of so-called ‘trolls’ on such websites. Trolls are people who post inflammatory statements online in order to provoke other people and deflect attention from the actual issue. Trolling started out as a minor nuisance to users online but has since taken a more serious shape where people in the real world and events such as elections and court-trials are influenced by the actions of these trolls. Trolls can be either solitary or part of organized state-funded efforts. They remain hard to stop because since the accounts are anonymous, the trolls can make more accounts. Here’s a look at how can blockchains be used to automate the banning of social media trolls.

The Growing Importance of Managing Trolls

As the popularity of social media has grown, more companies have been forced to create online profiles and directly interact with their customers as a form of marketing. Companies have to pay companies like Facebook and Twitter in order for their posts to show up higher in their customers’ feeds. But internet trolls inevitably show up on such posts to disrupt the conversation and personally attack the company or their customers at any opportunity of a meaningful conversation. Likewise, paid commenters who seek to shift the tone of conversation regarding current news and other political topics regularly wreak havoc on discussion boards on sites like Reddit and Facebook often engaging in hate speech and even personal threats. For instance, one of the biggest ongoing stories right now is concerned with finding the exact extent to which state-sponsored Russian trollers meddled in the 2016 US election. A growing number of youngsters aged 18-29 have been quitting social media altogether because of the toll that these trolls take on their mental health. In a recent study by the Pew Research Center, it was noted that 42% of US Facebook users had taken a break from the platform in the past 12 months. Additionally, around one-quarter of the population had deleted the Facebook app from their phone. Among younger users, in the 18-29 range, nearly half said they deleted the Facebook mobile app. As mentioned above, the problem with reining in the trolls is that it is very easy to create a new online profile on these social media points. That means banning these internet trolls is an exercise in futility and requires a more absorbing solution.

Curbing the destruction caused by the activities of internet trolls remains a big challenge for both social media platforms and the governments around the world. Any solution that effectively deals with internet trolls consists of making sure that they cannot simply create another alias to return to their destructive activities. Blockchains can be very useful here since they can be used to store ID data in a decentralized and tamper resistant way. The Iceland based company Authenteq has devised a new mechanism called Trollteq for utilizing the power of blockchains to block repeated trolls online. The system consists of using smartphones to authenticate the user using their passport. The Trollteq system uses the Near Field Communication (NFC) feature of a user’s smartphone to scan the machine-readable zone (MRZ) of the user’s passport and gain access to the name and photo. The user is then required to take a selfie, which is then compared to the passport data. The entire process is fully automated and required no human help, thereby reducing the risk of ID theft. All of the users would be required to be authenticated using the Trollteq system before being eligible to post comments. The brilliant part about this approach is that after being banned, a malicious troll would be unable to create another alias and return to their shenanigans.

The Future of Cyber Security: Blockchain Technology
Scroll to top