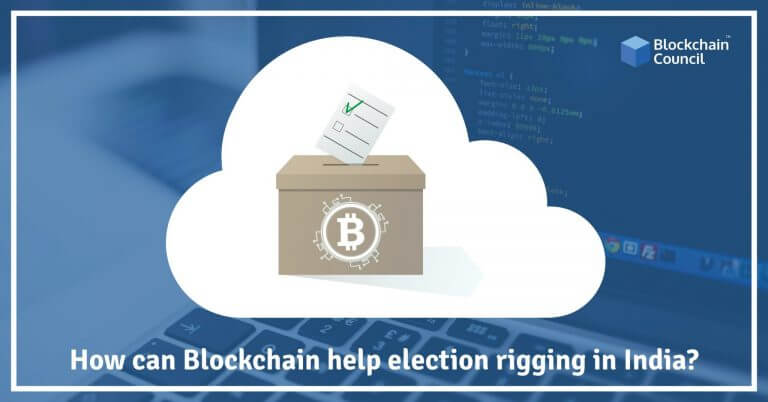 When we talk about revolutionary technology in recent times, then no one can ignore Blockchain Technology. Blockchain triggers one of the most revolutionary changes in recent times. Although Blockchain underlies the functioning of cryptocurrency exchange, it has immensely outgrown its conventional application and finds application in myriads of fields. Even though Blockchain is a dynamic technology but most of us are aware of its limited applications. But the fact of the matter is that Blockchain can prove to be immensely beneficial in other fields. Election and voting is one such field. It might sound strong to some, but the truth remains that Blockchain can revolutionize the electoral system. It becomes significant for a nation like India where we keep on hearing about fraud in the EVM and voting system. In this blog, I will be highlighting how Blockchain can help election rigging in India.

What is happening on the Blockchain front in India?

India is the largest democracy in the world and election plays a crucial role in establishing this democracy. The power vests in the hand of people and with their voting rights, they decide who would be seated as a superpower in the nation. But lately, we have seen a lot of allegations surrounding the election system in India. The EVM scam has become everyday news, every time during the elections and after it, the political parties accuse one another about tampering the EVMs to change the votes.</[>

Despite, the Election Commission of India assures that EVM is functioning flawlessly, but at the same time we cannot undermine the fact that there is a probability of hacking the system and tampering the voting.

Despite deploying state of the art technologies, we cannot guarantee transparent and secure voting. So what is the solution for the same? Well, Blockchain can prove to be a beneficial technology in here.

The Blockchain is a distributed ledger technology which works on the principle of peer-to-peer transaction where there is no interference of the third party. Its decentralized functioning makes it hack free and tamper-free. Moreover, the immutability features further adds to the security of the system. All these factors make the developers and researchers believe that Blockchain technology-based applications can be a probable solution. Before heading further let us have a quick view at some of the features of Blockchain which can prove beneficial to election system :

How will Blockchain revolutionize the Election System in India?

Let’s see how can Blockchain change the election system. When we talk about Blockchain voting, then every vote is same as a transaction that takes place in the system. It gets entered in the ledger. All the ballots are encrypted cryptographically. Since anonymity is the key feature of Blockchain, the voter’s identity will remain hidden. Moreover, the peer-to-peer interaction will help the voters trace their votes and whether or not it has gone to the right candidate.

Although, it sounds very lucrative at the moment its practical application is yet to be seen. The Blockchain is still at a very nascent stage, and its application in the field of election and vote counting is still under scrutiny.

What is happening on the global front?

Despite Blockchain being a new technology, it still seems to be gripping the nations on the global front. Many countries like Australia and South Korea are exploring the Blockchain voting. As compared to other nations, India is still new to the concept of Blockchain and its application. If the government wants to overcome the debate of EVM tampering, then it must start exploring Blockchain for the benefit of all.

Once the citizen votes in the digital box, the vote gets randomized more than three times so that the identity of the voter remains hidden. Once the polls are closed, a new Blockchain application is developed for vaunting of votes.

This Blockchain should match the public bulletin board’s Blockchain, and once it matches, we get to know that voting has been executed correctly.

Well, the nation seems to be understanding the importance of Blockchain and hence, Reserve Bank of India has developed proof-of-concept on Blockchain along with some other banks. The outcome of this development is positive. Not only this, but SBI has also initiated a national Blockchain consortium to explore how Blockchain can the banking system can be made more efficient and seamless.