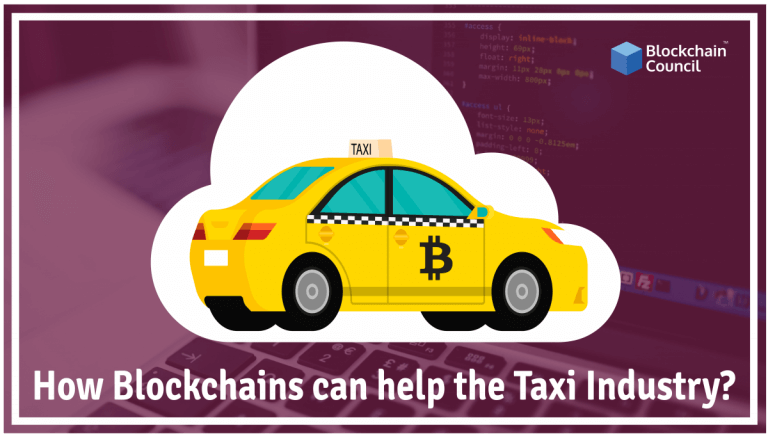 Blockchains are among the most promising technologies that have come out of the past decade with the potential to disrupt not just the financial industry but also every other industry that involves a transaction, like a taxi industry. Centralized companies like Uber and Lyft have already brought about a revolution in the taxi industry over the last few years, but these services suffer from the problems inherent with centralized systems – that of high fees for the intermediary company in addition to providing no transparency regarding how these companies function. Blockchains could improve upon this system by democratizing the selection process by developing upon Uber’s model or the more futuristic Internet-of-Things way.

One of the biggest issues faced by Uber and Lyft currently is ensuring the safety of both the driver and the passenger using their service. Companies like Uber spend millions of dollar annually trying to verify the identity of their drivers and to run background checks but despite their best efforts incidences of crime and fraudulent identities in the Taxi Industry is still high. This is a great use case for blockchains as they can provide very reliable identity verification along with bringing down costs which could help these companies provide a safer ride experience along with saving millions of dollars annually. Civic is currently the leader in blockchain based identity verification and is rapidly expanding.

Benefits of the Decentralized Uber Model

Uber has undoubtedly disrupted the Taxi Industry by reducing the barriers to entry both for the drivers and users, thereby bringing down costs and waiting times. For this extraordinary feat, Uber’s valuation is currently at $70 billion and Lyft’s is at $11 billion. These are huge markets that are only going to get bigger with time, as more users become comfortable with the idea of getting cabs to their location with the help of their mobile phones. But as these companies grow, they are bound to face the problems that are inherent to centralized models like too much authority with one central authority and arbitrary fees charged by these middlemen for providing the connection service.

In the alternative Blockchain based model, users could book, pay, and trust drives by using the blockchain which could have a built-in rating system in place for increasing the security of both the parties. The most prominent benefits of a system like this are that algorithms that determine ride selection and features like surge pricing will become more transparent as changes to the blockchain require a community consensus and the middlemen fees for using the platform are eliminated. Increased competition from such blockchain based ridesharing companies is a net positive for the market as when competition increases, the existing players need to innovate to stay competitive. This could also help keep giants like Uber in check as users and drivers get more options to choose their rides.

The Internet of Things Model

The Internet of Things is making great strides in “smartifying” everyday objects around us. Blockchains with near zero fee transactions will help to enable microtransactions which are probably going to be crucial to this machine economy. The ride-sharing marketplace stands to gain a lot from this model which removes a lot of the middlemen thereby bringing down the overall cost of doing business.

A scenario in which this helps the existing Taxi Industry is as follows: A user would book a self-driving cab from their smartphone. Upon receiving the pickup request via the blockchain, the cab goes to the nearest gas station to purchase only as much fuel as is necessary for this ride and pays the station via the same blockchain, thereby reducing wastage. The car then completes the trip with the user and then parks itself in the nearest automated parking garage again by paying via the blockchain and waiting for the next booking. Compared to the current model where we need human beings to be present in all the three locations required for the ride – the car, the gas station and the parking station, the Internet of Things model delegates all these menial tasks to the machines. Since the cost of maintaining this system is negligible, the benefits of saving costs in this manner can be passed on to both the customers and the businesses involved in the transaction which is a net gain for both the parties.