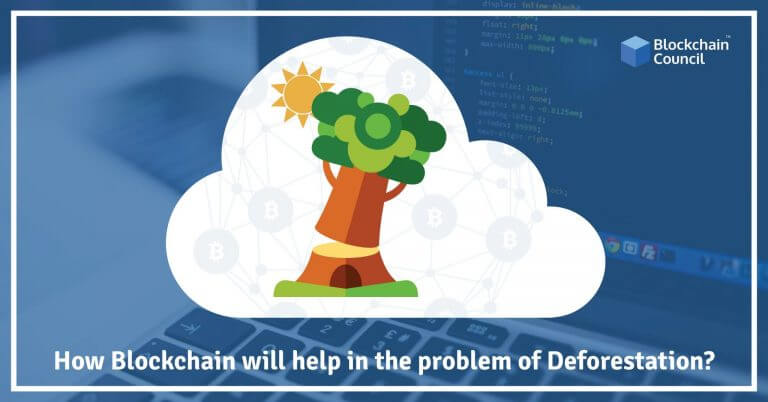 Deforestation is defined as the planned clearing of trees and other vegetation in an area for converting it to non-forest use. Typical use cases for this type of clearing include the creation of farmland or urban use along with the cultivation of natural timbers and other resources. Deforestation is undoubtedly one of the biggest causes of global climate change as forest cover acts as lungs of the planet – using up the carbon dioxide in the air and replacing it with oxygen. Let’s take a look at how deforestation affects climate change and how blockchain can help conserve the forest cover in the world.

Global warming refers to the gradual rise in Earth’s temperature over decades or even centuries due to human activity. Since the late 19th century, with the dawn of the industrial revolution, humans have been burning ever increasing amounts of fossil fuels to feed their energy needs. At the same time, the systematic clearing of trees and forest cover has slowed down the absorption of greenhouse gases like carbon dioxide from the air. That means that the concentration of carbon dioxide in the air has been steadily increasing in the atmosphere to the present 408 parts per million –  a level that the Earth hasn’t seen in millions of years. On average, temperatures over land and oceans have gone up by around 1 ℃ in the last 100 years. Currently, fossil fuels account for nearly 80% of our energy needs worldwide, and if we keep burning fossil fuels at the present rate, temperatures could rise between 2-4 ℃ by the end of the century. Such a dramatic rise in temperatures would cause the polar ice caps to melt and elevate the sea levels worldwide causing a lot of the coastal regions to become submerged. Rising temperatures would also mean that the world would see an increase in deadly heat waves, droughts, flooding, and collapse of entire ecosystems.

As stated above, matters are complicated even more because of planned deforestation because of the demand for products from the forest such as wood from the trees and pharmaceutical compounds used in the manufacture of modern medicines. The high demand for these forest products has given rise to the illegal logging industry which is estimated to be a $15 billion enterprise annually. Illegal logging includes a number of harmful activities related to the clearing of protected forests including cutting of protected species, cutting in protected areas, and cutting with fake or illegally obtained permits.

How Blockchain Can Curb Illegal Deforestation?

Blockchain is powerful when it comes to maintaining the integrity of any sort of record like a land record or a logging permit. While the enforcement of the permits remains with local law enforcement in forest areas, blockchain can provide governments a way to track changes on forest cover over time by making land records unalterable. Blockchain can also be used to track pieces of wood from the moment they are logged to their final destination throughout the entire supply chain. This would give the regulatory authorities much greater view of the entire logging industry and at the same time encourages loggers to follow the law. Using blockchain to track pieces of wood until they reach their final destination would make it easy to pick out any illegal pieces that would show up in the chain. In conclusion, the issue of global warming is one of the critical problems of our times that requires a concerted effort on all parts of the governments and citizens together. And while blockchain is not the magic bullet that can eliminate deforestation overnight, they can certainly help us develop tools that we need to encourage better behavior from all parties involved in the logging trade.

How Blockchain Could Help You in Business?
Scroll to top