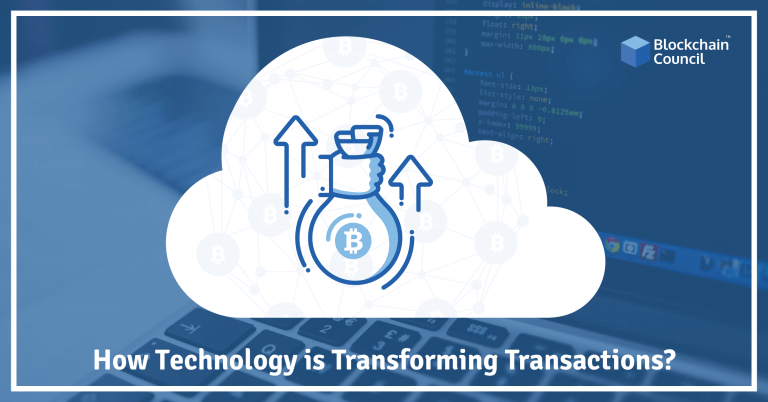 When we talk about technological transformation, then Blockchain is the one technology which has been creating a new benchmark of success every day. It is one technology which brought forth our attention to the fact that our assets are vested in central authority, and there is a need for a system which is decentralized. Such a system should be more secure, cut down transaction time, makes data tracing easy and allows direct interaction between the buyer and seller.

Well, if we talk about Blockchain, then the technology fit came into existence in 2008 with the surge of cryptocurrency Bitcoin. The Blockchain is the heart of Bitcoin. It underlies all the operations of digital currency exchange. With the passage of time Blockchain has also evolved and now it finds application in myriads of fields.

In this blog, I will be highlighting the use of Blockchain for transactions. When we talk about the transaction, then it can be pertaining to financial transactions, trading or exchange of information. So the next question that arises is how Blockchain is aiding this process, understanding it, we must have insight on Blockchain and its key features.

It is the digital distributed ledger technology which works on the principle of the peer-to-peer transaction. It means that there is no need for an intermediary. Two parties can directly interact with each other and trade. One does not have to wait for third-party validation or approval; it further nullifies the transaction or processing fees. Furthermore, Blockchain is decentralized which means that the information is distributed in the network. Since the information or data is not centralized, it becomes difficult for the hacker to hack it or alter the information.

Blockchain offers series of features which makes it the most sought-after technology of the future, here are a few notable ones:

How is Blockchain aiding transaction?

When we talk about Blockchain, then its role in the financial transaction is the most conventional use which many companies are trying to tap on.  You would have noticed the surge of many cryptocurrencies that enable you to transact in digital currency, and at the same time, you can also exchange them for fiat currencies.

The story doesn’t end here; many companies are finding alternative ways to use Blockchain based cryptocurrency. They are developing apps and other modes wherein you can exchange your coins for buying products, making payments, etc.

Well, the use of Blockchain for the transaction has gained momentum as more and more companies are now focusing on using this technology to aid the financial transaction process, settlements of claims, etc.  Some of the big names making their way to the Blockchain technology use in the transaction include Some Hyperledger Fabric project by IBM, and R3’s Blockchain consortium.

These projects emphasize the use of Blockchain to become a part of mainstream business processes. It has the potential to reduce the settlement times as they make use of a digital signature which ensures timely processing of the operations.

The Blockchain-enabled platform provides higher security and lowers the cost of payment processes. In the current system there are many intermediaries involved in the payment transaction process, but with the surge of Blockchain based platforms, we can expect to diminish the role of intermediaries and thus saving the cost of the transaction, processing fees and time consumed during validation of transaction. Hence, we can say that Blockchain will transform the way transaction is being done.

How to start a career as Blockchain Developer?
Scroll to top