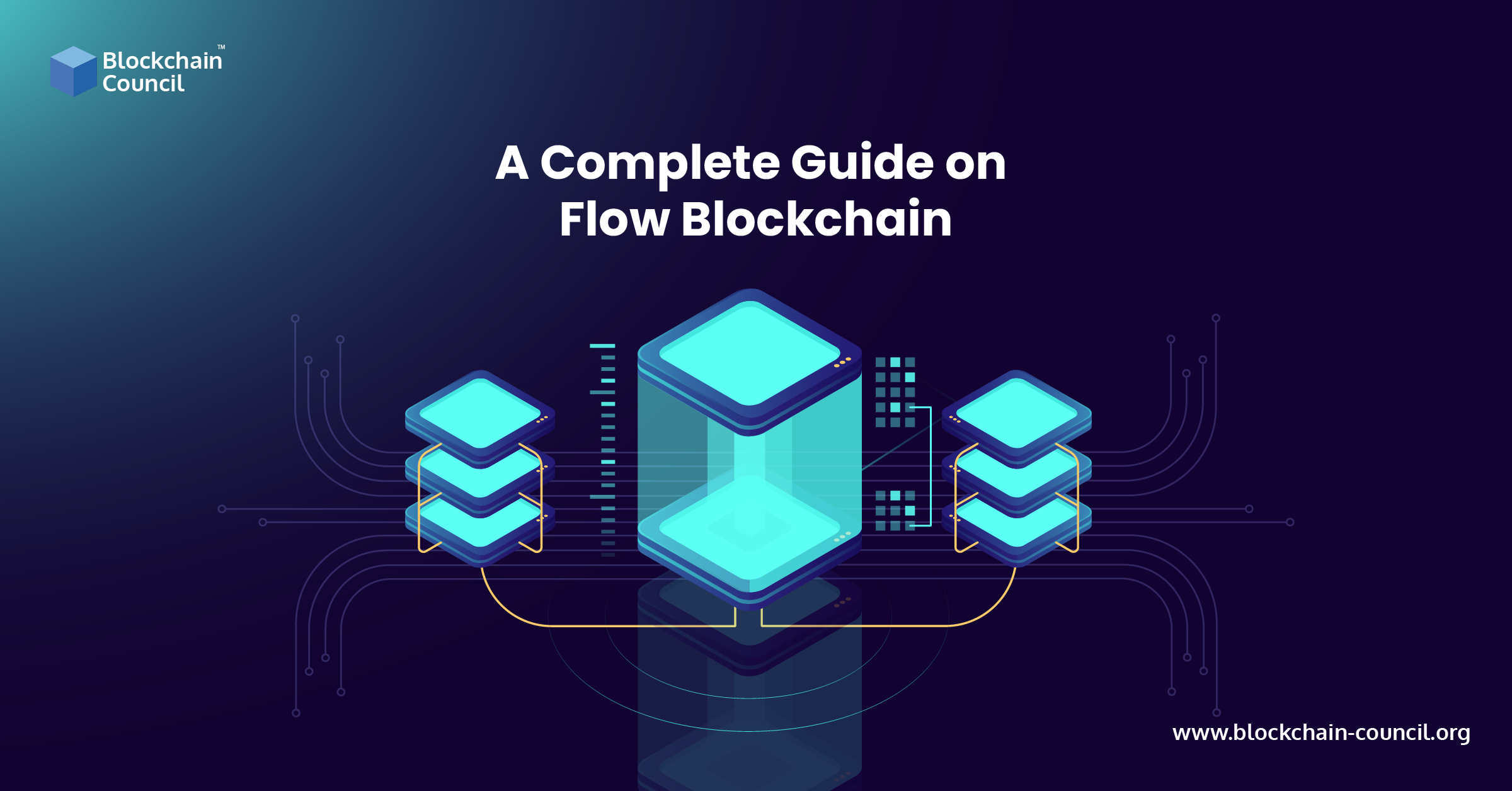 NFTs and blockchain technology have been massively making headlines for some time now. But, even before that, crypto enthusiasts and blockchain developers felt the presence of NFT usage through an early gaming project called CryptoKitties.

The developers built the project on the Ethereum network where users can mint NFT based kitties which have a wide usage like flipping, playing the game to earn more tokens, etc. But as most of us are aware of the potential downside of the Ethereum network, where crypto kitties are:

With that, the developers behind the game Dappers came up with a customizable blockchain that can be customized to suit the needs of ever-growing crypto adoption. This led to the origin of the Flow blockchain.

If you want to learn more about Blockchain Technology and leverage this new technology before anyone else does, then remember to check our blockchain certification course. Coming back to the topic, this guide will go into an in-depth journey about the flow blockchain and what makes it unique from hundreds of blockchains available in the market. In the end, you will have a clear idea of why NBA, UFC, Laliga, and NFL, some of the most famous sports leagues are partnering with the flow ecosystem. Let us dive in.

What is Flow Blockchain?

Flow blockchain encompasses all the capabilities that we have grown to expect from its predecessors, like decentralized, immutable, trustless, and transparent ledger. On top of that, the flow blockchain is fast and developer-friendly and designed to be the platform for new generation games, apps, and virtual assets.

The flow blockchain uses a unique multi-role architecture protocol to solve the scalability issues that the blockchain network faces. Though sharding is the most popular solution for blockchain scalability concerns, flow’s multi-role design can achieve the same, if not higher, throughput while maintaining a secure environment for developers and investors.

The flow blockchain is built on four unique pillars that support, solve the issues of existing blockchains and differentiate them from other blockchains.

Address the scaling issue with an alternative of the sharding capability to provide better security and platform for developers.

The flow blockchain uses a resource-rich, simple, and safe programming language called Candence to build the Dapps and Assets on its network.

The network provides efficient and frictionless secure transactions from fiat to crypto. This opens an easy gateway for onboarding new users.

The flow network has been made keeping the developers in mind like including in-build logging support, a short time-limited edit feature for smart contracts, and much more. This incentivizes new developers to create applications within the flow network.

Initially, the flow network was developed to be used as the platform to support the game crypto kitties, but the network became one of the sought-after networks by hundreds of developers worldwide.

Non-deterministic tasks need a consensus protocol like proof of stake or proof of work. But in the case of deterministic tasks, there is always a single and objectively correct outcome. This critical categorization addresses the traffic congestion of the blockchains.

The deterministic task of transaction execution in the block is the central issue for efficient block transactions. In contrast, subjective processes like block consensus and block formation hardly impact the transaction throughput of a blockchain.

The miners and validators of the flow network are divided into 4 main categories. This separation into micro categories helps avoid redundant efforts and streamlines the whole blockchain.

Every validator or miner of the network operator needs to stake in the network. This helps to prevent the double work and passing of fraudulent transactions.

The roles of individual nodes are:

No matter what role they are assigned, each node can penalize and trigger the whole network about fraudulent transactions. It makes sure that any invalid data brought about by the execution and collection nodes are thoroughly scrutinized.

Moreover, Candance has an easy-to-read syntax and static type system, which reduces runtime errors. This helps developers create smart contracts that learn and audit themselves easily while achieving more productivity.

Another way to introduce new developers into its network is by introducing open-source tools. Some amazing tools used by Flow network are:

With Flow JavaScript SDK, existing javascript developers can leverage their existing knowledge to develop Dapps on the Flow network.

Smart contracts are the most prized product of blockchain technology. They are self-executing programs that are trustless and remove issues associated with traditional paper contracts. The immutable nature of a smart contract is both a boon and a curse.

While immutable contracts mean no one can interfere with it once it is pushed on the blockchain. But no one can change the terms even with the consensus of all the parties associated with it. This calls for another new contract with the necessary changes. This is the same as a hard fork in blockchains.

Since smart contracts are immutable, that means there is no debugging protocol present after the contract is pushed in the blockchain. Again, the issue of re-developing the contract arises by issuing a hard fork. The most famous example of this is the Ethereum hard fork, which resulted in creating the old network: Ethereum classic and new network: Ethereum.

Now with the Flow network, developers can deploy their smart contracts on the main net in a beta state, which will allow them to update the contract. Moreover, users can identify a beta state smart contract and wait for it to finish before using it.

After the developers have thoroughly tested the contract for bugs and other issues, they can release the finalized version, which is truly immutable. This short time editable feature to the smart contracts is highly beneficial for developers.

When developing a complicated piece of software, logging its behaviour over a long period of time is essential. This ensures that a piece of code is functioning as it is expected. But logging process for smart contracts means keeping an entire log record on the blockchain, which raises the issue of too much data and slows down the network.

That is why smart contract platforms have no logging support. But with Flow, developers can store the data according to log messages for topics. So when a developer wants to examine the logs, they can request the transaction of the chain associated with a particular topic. This makes the event of logging and gathering log information more efficient.

So if you want to learn more about smart contracts and how to develop your very first contract, then check out our blockchain certification course, where you can upskill yourself with the latest Web3 technologies.

A network is redundant without any user actually using it. Flow network addresses this issue with its consumer-friendly onboarding and can reap the true benefits of its Decentralised applications.

Any user using Android or IOS apps has received permission requests when using applications. Similarly, transactions on the blockchain request permissions for authorization of transactions. But at present, it is practically impossible to offer human-readable permissions.

But with flow’s transaction format, users can get assurance of the changes that can be introduced within a transaction. This will make sure that users are not at a loss when making informed decisions. Moreover, offering a better analysis or transparency of a transaction increases the user’s trust in the blockchain.

Another issue with blockchain technology wallets is losing seed words and keys.

So, Dapper Labs uses a variety of enhancements to the Ethereum Account Model to make Dapper a smart contract wallet.

The Flow token is the native currency of the network and powers the network.

Dapper Labs earned $18 million in October 2020 from the sale of its tokens. The token sold were locked for one year, which means no circulation of them until they are unlocked. This ensured that no gruntled investor dumped its token and harmed the network.

But validators and node operators who are offered Flow tokens as rewards can exchange and sell them on exchanges like Kraken and Huboi.

With that Dapper labs, the team behind the Flow blockchain have made major partnerships with UFC, Samsung, CNN, Ubisoft, and many more. All of them are looking to create successful products like NBA top shots while leveraging the Flow Blockchain.

With the success of its NBA Top Shot Decentralized app, the Flow network has seen a massive inflow of developers and users alike. NFT marketplace Rarible announced that it would expand its offerings on the Flow network.

Flow is developing its infrastructure for a collectable platform that can again repeat the success of its previous projects. Recently Flow also introduced its US dollar-backed stable coin associated with financial firm Prime Trust.

All of this sounds amazing, and with that, the flow network has massive plans ahead of itself to provide gaming experiences beyond NFTs.

Now, if you liked this article and want to be a part of the blockchain revolution, you can try out our blockchain classes to ensure that you do not miss the earning potential for the successor of the internet revolution.