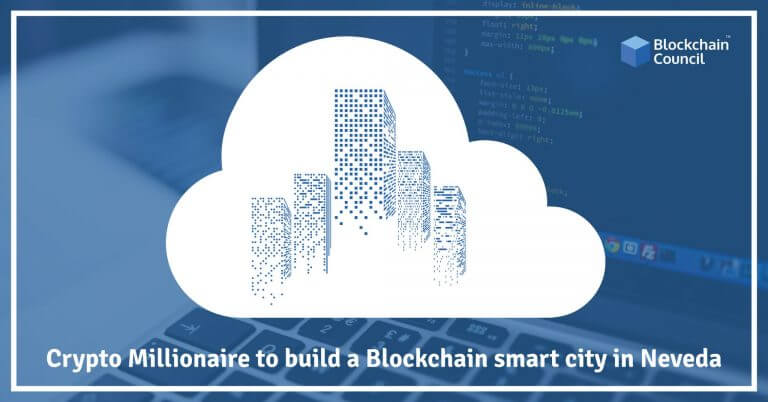 If you are planning for growth and development, it would be useless without integrating it with modern technology, and the latest one on the list is Blockchain. This Distributed Ledger Technology surged in 2009 with the rise of cryptocurrency Bitcoin, and since then DLT is influencing various business niches. Apart from forming the base and platform for different application, Blockchain is known to motivate people to come up with new business ideas. The recent news on this front has come from Nevada where a crypto billionaire has decided to develop a smart city which will have Blockchain technology at its core.

What is the news?

Jeffrey Berns, who is a lawyer and a cryptocurrency billionaire has recently invested in a property in Nevada where he wishes to come up with a smart city that will be laced with all the amenities and will have Blockchain Technology as its DNA. The place where he plans to put up this new project is in the vanity of metro Reno-Sparks, Nevada. Together with EYRC Architects + Tom Wiscombe Architecture Rendering of Innovation Park Berns’ company, Blockchains LLC, Jeffrey paid $170 million in cash this year. 67,000 undeveloped acres in Storey County, a site larger than Reno.

The idea behind the development of this city is to leave a mark in the world and at the same time to come up with some the cryptocurrency-based asset.

What will the city have?

Berns wishes to create an entirely new town which will be self-sustainable and where all people need to complete ownership of their information and data. This city will have blockchain at its core. Jeffrey Berns plans to come with school commercial properties, residences, production studios and all the features that a modern city must contain. He also plans to dedicate a portion of the town for cryptocurrency research and development. The reason Jeffrey chose Nevada is that the land here is available at a cheaper rate and it also has low taxes which makes it a profitable deal. There is also a plan to build a college and e-gaming area in this smart city.

EYRC Architects and Tom Wiscombe Architecture will be designing this city. As per the architects they are planning to come up with a city that will support communication and creativity. It will have a massive workspace where the developers and researchers can develop new inventions to design the city.  The city will have large civic-scale spaces and lush green courtyards for learning and meeting. The city will mainly rely on a non-renewable source of energy like solar and wind. Jeffrey aims at recycling the water since the land lies in the desert area there will be a shortage of water. The residents will have the facility of autonomous vehicles.

There is also a special emphasis on the healthcare where the citizen will have facilities like telemedicine which use ICTs to provide remote medical help.

What is the role of Blockchain Technology in this city?

If we are talking about the smart city based on state of the art technology, how could this be complete without Blockchain? The smart city will have Blockchain at its core where the people will have proof of documents of ownership or existence. Blockchain will help in finding and legitimizing the same or purchase of lands and plots.

This development will surely pave the way for new kind of development in the market. Having Blockchain Technology at the core will not only help in making the system of sale and purchase transparent, but owners will have complete access to the information which is otherwise difficult to fetch. There will be no need for a third party to buy and sell plots and at the same time, it will also ensure that the data of the residents are safe.

The future of Blockchain Technology, for now, looks strong. With the help of Blockchain, we can create a platform or a system where people can put in their trust. Moreover, its integration of real estate will help in making the system even more transparent. It will make it easy for the buyer to get access to their personal information all the time. This smart city in Nevada is another application of Blokcchian in real estate.