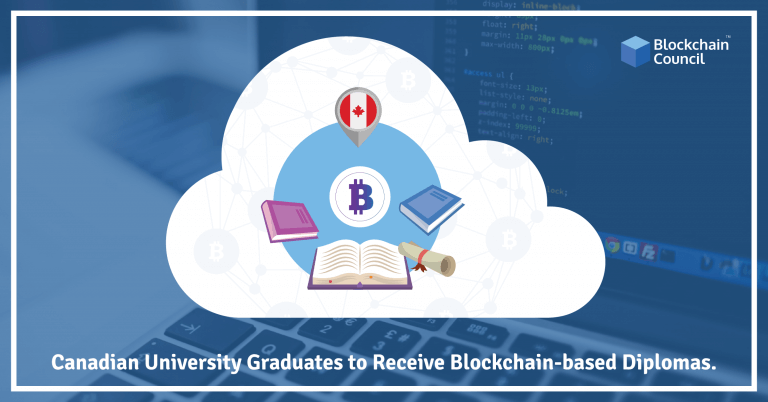 Southern Alberta Institute of Technology (SAIT), Canada, will be issuing blockchain-based diplomas to its next graduating class, as announced through an official press release on 13 June. This Canadian tech institute has partnered with the ODEM (On-Demand Education Marketplace) to provide copies of student diplomas, which will be based on blockchain technology for the graduating class of 2019. SAIT will grant these digital diplomas to more than 4800 students.

SAIT was established in the year 1916 and was the first publicly funded technical school in North America. Today, SAIT has emerged as a global leader in applied education. It serves 50,000 students annually through its 1300 part-time courses and 100 career programs. SAIT students are equipped to be career-ready when they graduate due to action-based learning, enterprising collaborations with industry partners, and solution-focused research which is offered to them.

Students will receive a digital version of these certifications in tandem with traditional paper copies. They will reportedly be able to use it for sharing official diplomas, circumventing the need for alumni requesting SAIT to send official documents for circulating to employers and recruiters. Graduates will be able to share their academic achievements directly.

ODEM (On-Demand Education Marketplace) is built on the Ethereum blockchain and is a platform which provided of both seeking and providing education and employment. It offers a wide range of courses and the opportunity to showcase skills, connect with employers, and earn credentials. ODEM, owing to its passion for higher learning, works to make education and employment affordable, transferable, verifiable, and accessible.

When commenting on how this would give students ownership of their diplomas, Richard Maaghul, ODEM CEO, stated, “We believe that students should have control over their records, and blockchain technology makes that possible. We’re delighted to play a role in empowering SAIT graduates to own their education over a lifetime of learning.”

The blockchain records will also make the hiring process easier for employers as they can easily verify the genuineness of SAIT alumni. In December, SAIT and ODEM reportedly ran a pilot project, where they used the Ethereum blockchain to test the process of issuance of blockchain-based diplomas. The pilot included 25 graduates from the Pre-Employment Automotive Service Technician Program.

In the words of Dr.David Ross, SAIT’s President and CEO, “By making valued SAIT credentials accessible through blockchain, our graduates and employers will continue to benefit from this innovative technology that’s responsive, authentic, and widely accessible.”

Universities in other countries such as Malta and Bahrain have also started issuing and storing diplomas on blockchains. According to recent reports, the University of British Columbia in Canada has also started a blockchain training program for students at the graduate and Ph.D. levels. This program aims to train about 139 students over six years, to understand blockchain solutions in areas such as clean energy, health and wellness, indigenous issues, and regulatory technology.

Facebook Announces Libra Cryptocurrency : Everything You Need To Know
Scroll to top