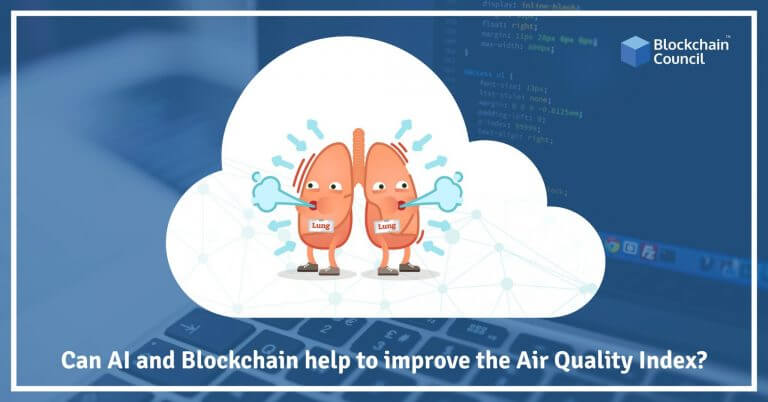 Developing countries around the world are suffering from the severely polluted air due to their growing populations which are consuming ever-increasing amounts of fossil fuels to drive economic growth. India is home to 11 of the 12 cities which ranked highest in WHO rankings for PM 2.5 Air Pollution, which is the most hazardous particle to human beings. Cities that suffer from bad air quality throughout the year see an increasing number of breathing problems in their residents with increased numbers of asthma, lung cancer, and even cardiac problems. So how can Blockchains and AI combat the threat of polluted air in developing countries?

Air pollution is caused by a number of airborne particles which include nitrogen oxide and other oxides of nitrogen, carbon monoxide, ozone, benzene, ammonia, and sulfur dioxide. WHO rankings rely on the classification of these particles into two categories – PM 2.5 particles which are smaller than 2.5 microns in diameter and PM10 particles which are 10 microns in diameter. Of the two, PM 2.5 particles are the worse because they can stay in the air longer and penetrate human lungs deeper due to their smaller size. In developing countries, where people do not have access to clean fuels for cooking food, people turn to burn wood for their energy needs. Particles from such open flames combined with diesel exhaust, dust storms and dropping temperatures around November combine to create a blanket of thick corrosive smoke that surrounds many of the cities in the list. In Delhi, much of the smoke originates not from the city, but from the surrounding farming areas where small-scale farmers have to burn the stubble from their previous harvest in order to prepare the soil for the next crop. With no access to machines required and farmers getting rid of the stubble in there, they have no choice but to burn the stubble which raises thick clouds of smoke that cover the entire northern plains of India.

About a decade ago, Beijing in China was suffering from a very similar air quality crisis that Delhi is going through right now. By 2017, the air quality of Beijing had improved drastically to PM 2.5 concentration of under 60 micrograms per cubic meter. Beijing has brought about this air quality revolution through a combination of cutting-edge technology for research of the causes of air pollution and monitoring of air quality with strict enforcement from the government. Yu Jianhua, the chief engineer of the environmental protection bureau of Beijing says that the city currently uses satellite remote sensing and laser radar to improve the ability of analysis and evaluation of air quality. The Beijing government spent a whopping 3.2 billion USD over the course of 4 years in 2013 which was used to set up gas-based power plants to switch from coal-powered plants. Additionally, the government has improved the state of public transport to encourage people to ditch personal vehicles that congest the roads and contribute to additional vehicular pollution.

Like Mr Yu Jianhua said, emerging technology is the best tool we have for real-time monitoring of air quality which can be used to make informed decisions about the best course of corrective actions. For instance, in Delhi, where the main source of air pollution is stubble burning, air monitoring equipment can be linked to a shared ledger of data that is managed by smart contracts. When the sensors sense unusual activity such as crop burnings, smart contracts can alert the authorities of hazards. Artificial Intelligence can be employed at petrol pumps and traffic tolls to monitor vehicular emissions and hand out real-time fines for violators. Ultimately, battling bad air quality is a combined public-private effort that can benefit from emerging technologies.