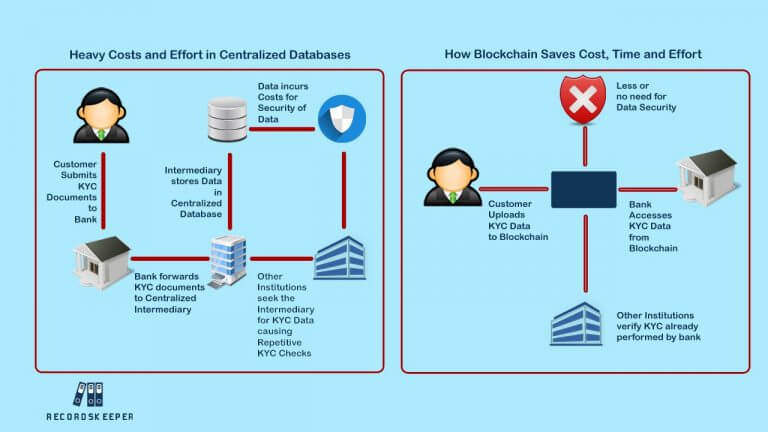 KYC is a cumbersome, time-consuming, arduous and expensive process in the banking sector, financial institutions, and other businesses. There are many challenges in KYC processes, which primarily involve huge costs, effort and time. Hence, with centralized databases, the process has become quite a sort of a headache to banks and other businesses. So, let’s see how blockchain-based KYC can solve these problems:

Since most of the banks currently perform KYC checks out of centralized databases, multiple checks have to be performed. Even within banks, each department will have to perform repeated background checks of a customer. This is due to what one calls as a data silo. The same has been a problem for most businesses. With blockchain, the KYC is performed only once and it is published and distributed across all nodes or parties. So, there is no need to perform repetitive checks, which saves time, effort and money.

Banks need to either have the technological know-how or invest in an external agency to store and protect customer data. These are prohibitively costlier. Investing in high-end systems and employing both the human resources and technology to protect data has proven to be costly. So, blockchain can offer a perfect solution to this problem, as there is no need to constantly monitor and protect the data.

Blockchain uses distributed ledger technology, which publishes data across millions of nodes connected to the chain. Hence, there is no need for a centralized data server or network. This brings down the costs drastically. So, banks can now be free of the need to store and protect data, which is automatically taken care of.

In addition to eliminating the need for a centralized database, banks and other businesses need not also worry about hacking. The data is highly immutable, as the storage does not take place in a single centralized server. There really is no need for software and hardware security to keep the data secure on a blockchain.

This brings down the cost heavily to a fraction, as blockchain publishes data on multiple nodes at once. It is not possible or will simply turn meaningless to alter data on a blockchain. At least about 51% of the nodes will have to be in agreement with an identity or transaction. Hence, the data on a blockchain remains immutable.

Infrequent checks and lack of need for a centralized storage and security infrastructure are sure to bring down costs on a blockchain. Banks and other businesses, thus, for KYC processes, can save costs that usually run up to hundreds of thousands of dollars. Currently, blockchain incurs a cost of less than $5 to perform KYC checks and to store and access data. This is sure to go down, as more and more people use blockchain for more and more applications.