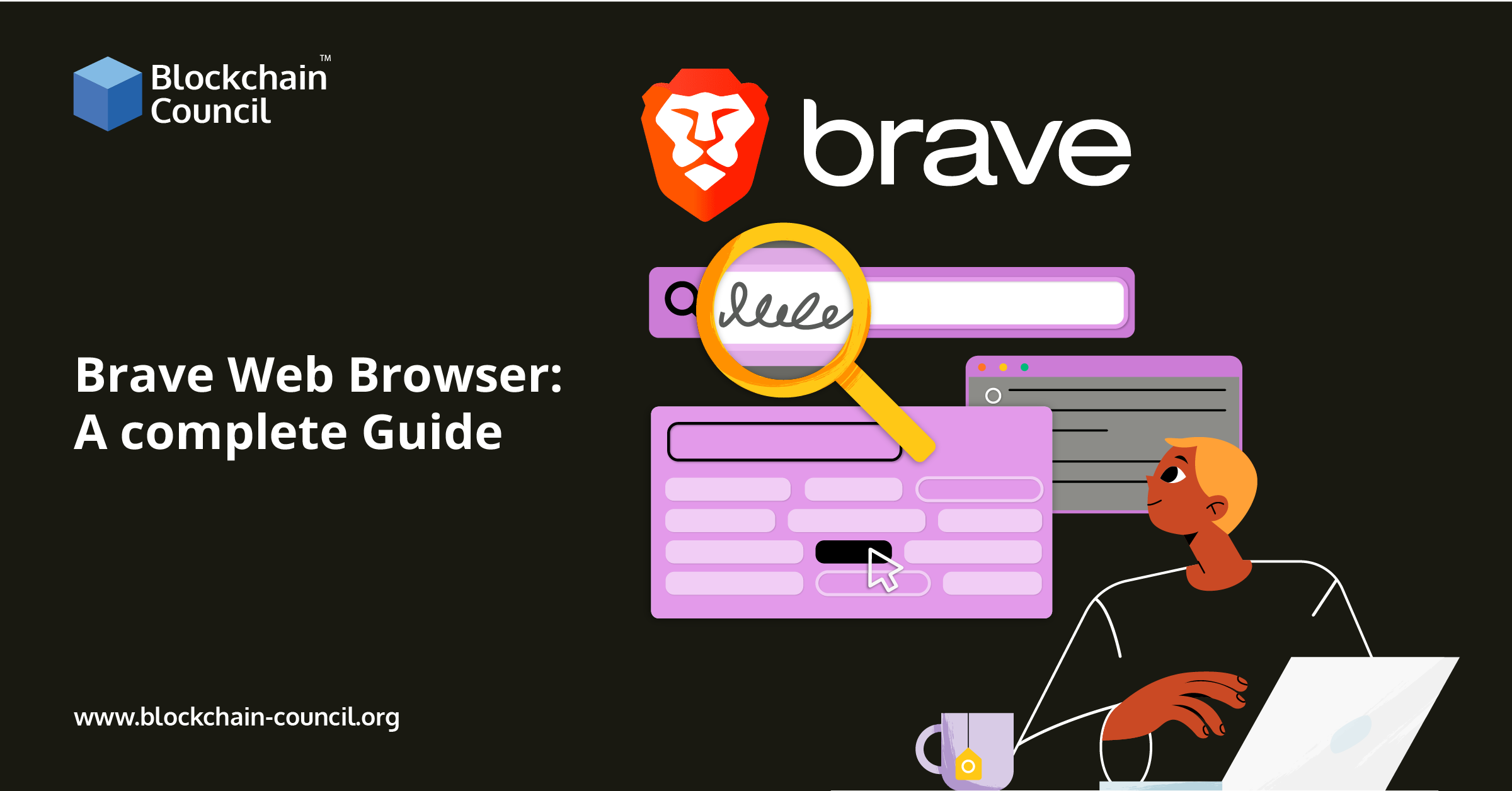 Popular web browsers and the large companies that run them, such as Google and Microsoft, are being scrutinized more closely. Concerns about how businesses store and share information with marketers are rising. Also, how they allow advertisers to gather data through the use of cookies and other tracking technologies.

Brave represents a significant transformation in the way consumers, publishers, and advertising firms interact on the web.

Brave is a web browser powered by cryptocurrency that competes with today’s personal data-hungry browsers. Even though the Brave Browser is not based on the blockchain, it does have its own cryptocurrency, the Basic Attention Token (BAT). BAT is used to reward users and content providers.

What is Brave Browser?

Brave is an open-source web browser that intends to make it easier for people to keep track of their personal data. The data collected by traditional browsers is frequently packaged and sold to organizations wanting to understand what you do when surfing the web in order to deliver tailored adverts. Brave aspires to make a difference.

It disables advertisements and trackers and allows users to opt-in to specific advertising in return for its native coin, the Basic Attention Token, or BAT. In this helpful guide, you can learn more about BAT.
Brave has a similar browser interface to its competitors. Brave software is configured for Android and iOS operating systems for both desktop and mobile devices.

The Chronicles of Brave’s Existence

CEO Brendan Eich and CTO Brian Bondy created Brave Software on May 28, 2015. Brave Software announced intentions for a privacy-respecting ad ecosystem and released the first version of Brave with ad-blocking features on January 20, 2016.

Brave launched a pay-to-surf beta version of the browser in June 2018. This version of Brave came packaged with roughly 250 adverts and provided Brave with a detailed history of the user’s surfing activities in order to test this functionality in the near term. Expanded trials would follow, according to Brave. Brave introduced Tor compatibility to its desktop browser’s private-browsing mode later that month.

Brave operated on a fork of Electron called Muon until December 2018, which they touted as a “more secure fork.” Despite this, Brave devs switched to Chromium to reduce their maintenance load. Brave Software issued the final Muon-based version with the aim of it ceasing to function and advised users to update as the deadline neared.

Brave began testing a new ad-blocking rule-matching algorithm written in Rust in June 2019, replacing the prior C++ approach. The new logic was influenced by the uBlock Origin and Ghostery algorithms, which Brave says is 69 times quicker than the previous one.

Brave’s stable release, version 1.0, was released on November 13, 2019, with a monthly active user base of 8.7 million. It had 3 million daily active users at the time. According to Engadget, Brave 1.0 integrates “almost all of Brave’s major features across all platforms” and may be used on Android, iOS, Windows 10, macOS, or Linux.

Brave launched its search engine in March 2021 after purchasing Tailcat from Cliqz, a German subsidiary of Hubert Burda Media. Tailcat was created with the intention of providing search results without recording user behavior or generating profiles.
Brave was the first browser to be added to the Epic Games Store in April 2021.

Brave Search Engine, a search engine by Brave Software, debuted its public beta in June 2021. It’s presently in the works.

What is the mechanism behind it?

Users may use Brave to prohibit advertisements from appearing on websites they visit. It stops ad trackers and cookies from starting up, running, and collecting data while the user is browsing. The browser will reward users for watching adverts with its inbuilt token, the BAT, while users may accept cookies if they need to or are pleased to see ads.

The purpose of the software startup is to build a system in which users are rewarded with BAT for paying attention to advertisements. Platform sponsors will pay to insert advertisements in BAT, and viewers will receive a piece of the advertising money.

This new model promises to provide internet users control over advertising and hence data sharing, as well as to create a system where publishers may be directly compensated for their content.

Some of the key features of Brave that distinguish it from other web browsers are:

Nobody except you needs to know about your browsing habits and history. Brave Shields protects you against online trackers tracking you around the internet. Even Brave Software has no idea what you’re up to because Shields runs fully on your device, so you can keep your business private.

Shields automatically block trackers and the advertisements that rely on them; there’s no need to turn anything on or adjust anything. So browse the web with the assurance that no one is keeping track of your hobbies or reading habits. In the address bar, you’ll see the Shields button.

Shields help web pages load quicker. The majority of websites have tracking components that impede your surfing, drain your battery, and waste your mobile connection. None of this is permitted in Brave. Shields is also considerably faster than using an extension because it is integrated right into Brave.

Brave blends in-browser heuristics and cloud-based machine learning with curated lists of known advertising and trackers utilized by the most popular ad-blocking add-ons.

This allows Brave to effectively block well-known trackers while still catching subtle activity, even if the trackers haven’t yet been added to a list. All of this guarantees that even the most hazardous snoopers are banned, leaving you with just the stuff you wish to see.

An average active user now makes roughly $5 USD per month. This statistic will change over time based on the region and other variables. Brave chooses which adverts to display you based on your browsing history, but your personal information is never shared outside of your browser. Even Brave Software is blind to it. You are the only one who has access to your personal information.

These earnings can be used to show your support to sites you like, such as Wikipedia, YouTube channels, or news websites. In addition, BAT will soon be used for premium content and subscriptions, as well as real-world incentives like hotel stays, restaurant vouchers, and gift cards, thanks to TAP Network’s 250,000 business partners.

When migrating from Chrome or other browsers, Brave has a modern approach to a simplified user interface that you’ll find comfortable. It’s easy to import your bookmarks, passwords, cookies, and browsing history, and you can get started right away. The transition to Brave takes less than a minute.

Brave has both light and dark themes, allowing you to rest your eyes from time to time. Apart from this mute button for tabs, a more structured settings page, a customizable new tab page, background video playback, and much more were introduced by the Brave team.

Some of the general features include:

General features available only on desktop

Brave Rewards is built on the Basic Attention Token (BAT), an ERC-20 utility token on the Ethereum network.

BAT was designed with the goal of giving importance to your time. You may earn BAT by paying attention to opt-in advertising, which you can then contribute to excellent websites.

Brave has teamed up with Uphold to allow you to convert your BAT earned through private advertising into national currencies or other assets. If your Brave Rewards wallet is linked to Uphold, you can add and withdraw BAT from it.

You may send the BAT you earn from advertisements to Uphold. You may also donate BAT straight to your Brave Rewards wallet to contribute to your favorite sites if you don’t want to view advertisements at all.

When you use BAT inside Brave Rewards, you don’t need to join up or worry about transaction fees or regulations, such as when you support a site through auto-contribution or giving a tip. However, if you want to redeem that BAT right away, Uphold makes sure to fulfill all of the necessary financial regulations.

Thus, you can use BAT in the following ways:

What Features Will Brave Browsers Have in the Future?

Brave has announced its roadmap for 2022, stating that they want to add these features to the Brave Browser to enhance its usefulness.

Brave and Solana announced a partnership to offer best-in-class wallet functionalities for the Solana blockchain technology to Brave’s Web3 desktop and mobile browsers in the first half of 2022 at Solana’s Breakpoint conference in Lisbon.

Support for the Brave Wallet’s auto-earn function for BAT.

BAT NFT utility: BAT may buy and own NFTs in Solana, Ethereum L2s, and other supported EVM ecosystems via the NFT Marketplace.

BAT Metaverse and Gaming Utility: In the Solana, Ethereum L2, and EVM ecosystems, BAT will be able to buy NFTs, access content, and be used with metaverse apps and blockchain gaming.

Collaborations around the themes of courage and Batman with NFT projects and creators.

BAT Community: Brave is now concentrating on creating a crypto-themed community in order to provide crypto and web3 education to college students through the BAT Ambassadors on Campus initiative. More virtual meetings, community calls, AMAs, events, and other possibilities are also being pursued by Brave in order to improve community participation and boost awareness of the blockchain ecosystem.

Brave’s innovative advertising and content-rewarding platform are rapidly gaining traction. Its pro-privacy stance is helping to build its user base, but the browser’s 5.5 million active users pale in contrast to Google Chrome’s billion users.

Brave’s problem will be determining whether advertisers would migrate away from the old economic model supported by browsers like Google and scaling its user base to the point where it can be considered a significant rival. Despite the fact that speed, privacy, and transparency are becoming increasingly vital to individuals, money is still what makes the world go around.

Brave has taken a bold step and is off to a solid start, competing with established models and popular browsers.That future hasn’t been here yet, but it’s getting closer. Brave is already bringing the pieces of that web together today.
If you aspire to become a blockchain expert, then Blockchain Council is available at your service. Blockchain Council offers some of the best blockchain certification courses that meets the current industry standards.

The Future of DAOs in the Social Media Ecosystem: Detailed Guide
Scroll to top