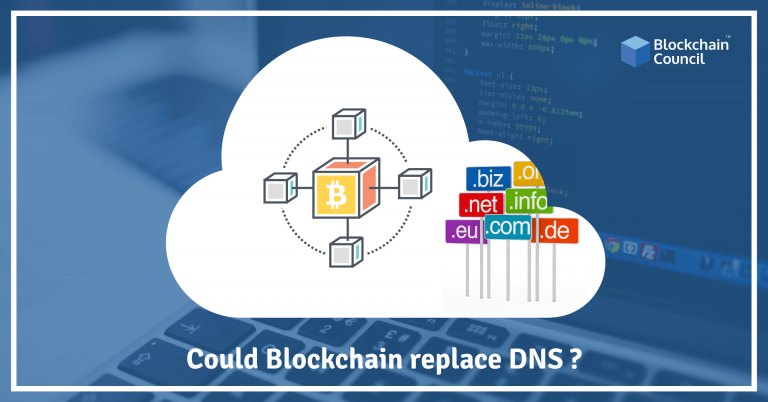 The market is buzzing with the news about Blockchain, and it’s not only restricted to cryptocurrencies transactions; rather we are witnessing growing application of this technology is myriads of the field. Whether its supply chain, healthcare, movies or business, Blockchain’s versatility has made it useful for different business niches. What brings me to write this blog here is the growing talks about using Blockchain instead of DNS. I will be highlighting the point whether Blockchain could be a possible alternative to the current Domain Name System or the DNS? Will it ensure the same level of safety, counter censure, and cache poisoning? But before heading to the conclusion, we must have a quick recap of both the concepts.

Let me keep it short and straightforward; Blockchain is a digital ledger which has all sort of transaction sorted in chronological order. It is a distributed ledger which is easily traceable, trackable, transparent and immutable. The main feature of this technology is decentralization, i.e., the information is distributed across different nodes in the system. Nodes are different computers which offer validation and verification of the transaction taking place in the network. Since the information is not centrally located, it is difficult to delete it, alter it and change it.  The Blockchain is a non-centrally maintained database where each transaction is recorded in the form of a block, and it contains a timestamp linked to the previous block. It means once the information enters the system, it is unalterable, even if there is a change, it will result in a shift in subsequent blocks which will readily visible in the system.

Thus, we can say that it’s a highly reliable system where you can ensure the security and authenticity of data or information or transaction.

The present DNS is a distributed network which helps in finding the IP addresses. The ICANN or the Internet Corporation for Assigned Names and Numbers lays the regulation for the functioning of DNS. It gives approval for the TLD or the Top Level Domain names like .com. It is the authority that accredit the registrars like the GoDaddy to sell the rights of using the domain name.

The current DNS system is hierarchical. This system’s root servers represents a high-value attack vector. Sice the entire system is centralized even the slightest failure at a single point can take down the whole internet.

Can Blockchain improve the DNS?

The questions that might be striking your mind would be if Blockchain can be an alternative to the DNS or Domain Name System. Before heading to this, you must know that the DNS system has been in existence since 1980. Its core function is still related to a domain name or URL like www.Blockchaincouncil.org. Its function is also related to metadata like the IP address or the Sender Policy Framework.

When you enter the URL name like www. Blockchain council.org then the resolver of your provider will consult with one of the DNS root servers. It then gets a reply, “We do not have org try another, and then it provides a list of name servers for org. The resolver again asks the same question, till one of them says it has blockchiancouncil.org.

Since the current DNS system is under the control of the regulations, the government might for some reason ban certain servers. It may require all the Internet Service Providers in that country to block certain domain name thus hindering the redirection process like it happened n 2014 when IPSs in Turkey were asked not to resolve to twitter.com.

With a DNS of the Blockchain, it will be based on the decentralized system, and thus, it may not hamper the redirection process.  Furthermore, Blockchain based DNS  may counter the censure and also avoid the problem of cache poisoning or DNS spoofing.

With the Blockchain-based DNS, the registry operators will have flexibility and will get more opportunities when they launch new Blockchain-based TLDs.It will enable them to tailor a TLD to a specific niche.  In simple words, they will have the power to customize the TLD effectively and efficiently.

Blockchain: the recent development in the field of DNS-

It’s true that Blockchain-based DNS inherits the benefits of decentralization. Unlike the current DNS system which is governed and is controlled by organizations, Blockchain-based DNS does not have any authorities. Every node in the server is equal. Only the owners can make changes in the current records. It is difficult for the authorities to make any changes in the domain name records. The current DNS system is prone to attach and hacking, but this is not the case with Blockchain based DNS.

The crux of the matter is that Blockchain is an unstoppable force which has the power to reshape the course of any business. This technology holds a promising future when it comes to the Blockchain based DNS system development. These systems are going be a secure, resilient an free from censorship.

Five Differences between an Exchange and a Blockchain
Scroll to top