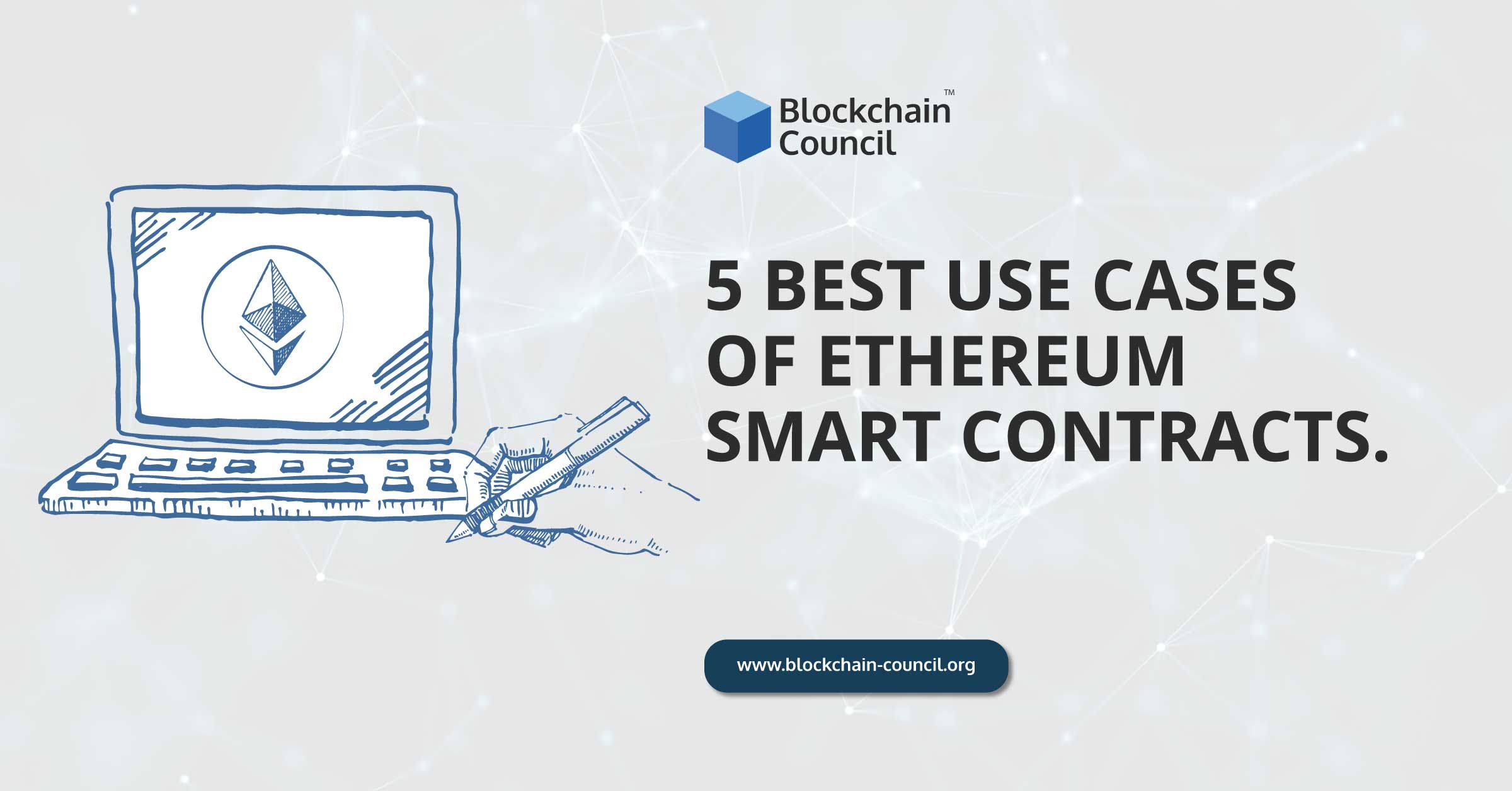 Ethereum is the second generation of Blockchain after the first bitcoin blockchain technology, which has kept its mark unwavering in the tech ecosystem. Smart contracts can be easily coded with the help of Ethereum Blockchain which is not possible through the Bitcoin Blockchain. This article contains a list of 5 best use cases of Ethereum smart contracts. Smart contract blockchain has revolutionized several platforms and it provides speed, transparency and fair accounts of event to both the party involved. Vitalik Buterin devised Ethereum Blockchain, which can perform advance level scripting like the smart contracts, to create a blockchain network that can provide a platform for the development of decentralized applications. The Ethereum Smart contract can be used in several real-life processes and it has many use cases:

The use of smart contract in the banking sector can speed up banking transactions and simplify several financial procedures. It will help in the accurate transfer of information and will help in fulfilling the obligations of all the parties involved. Since all the terms are fully visible to everyone, there remains no room for error in financial transaction and transparency of transaction is maintained.

Ethereum smart contracts have several smart use cases in the banking and finance sector. The concept of smart contracts can be widely used in mortgages, payments, national bonds, insurance claims etc to simplify the process and make the transaction fast and transparent. For example, when a bond is about to mature then it is written under smart contract it will automatically transfer the money to the bearer’s account without involvement of a third person in between. This makes the process transparent and effectively faster.

ICO or token sales can be made much effective with the help of Ethereum smart contract. It enhances the sale process, makes it more fair and transparent. Vitalik Butetrin recently announced that DAICO model is a combination of both DAO and ICO model. The DAICO variable called ‘tap’ is used along with DAICO smart contract by the development team in a DAICO model. The old ICO contract it starts with ‘contribution mode’ like the old ICO contracts where the investors were free to contribute Ether in compliance with the rules of the ICO.

In the DAICO model, the ‘tap’ button decides the amount of ether the developer can withdraw per second from the contract and this withdrawal limit is decided by the DAICO contributors. This keeps a check on the developers as they get restricted on the withdrawal limit and thus unable to run with the whole contributed money. This is how Ethereum smart contract can be used to efficiently manage and scrutinize the ICOs.

Prediction market has existed for many decades but cannot become mainstream due to involved risks. However, with the help of ethereum blockchain, knowledgeable players can gain a considerable amount. There is a better chance of prediction when the forecasters and researchers accumulate the data to predict the probabilities of future events.

Players have been betting since decades on different gaming with bet ranging from cents to millions without even trust in the third party. In such a scenario, classic gambling games are the first platform that is getting revolutionized by the smart contract concept.

Only a few platforms on the prediction platform like gnosis and Augar have implemented the Ethereum blockchain. The prediction market can be an effective platform to utilize Ethereum Blockchain smart contracts. This can be a prediction for the outcome of a football match, an election campaign, auctions etc. the participants are invited to make their predictions and they are further rewarded when they predict accurately with the help of trustless smart contracts operated on the ethereum blockchain. Thus the concept of ethereum blockchain can be used in any kind of betting, gambling or even in deciding whether a company should make a deal or launch a product or not just by making the entire process rewarding and cheaper.

The concept of smart contracts can be used to replace the middlemen and help you save your money. This service not only saves your money but also makes the process much more transparent. But this concept must be applied and tested thoroughly and should be applied in all necessary departments before giving it a final go. Ethereum smart contracts can also be applied in real estate, wills and in places where there are nominees. Another such platform where the smart contract can be used is Upwork where this can act as an escrow. On top of that, it will not even take any charge for every single piece of work. This makes the process cheaper and convenient.

Ethereum blockchain solves one of the most burning problems of the people, that is, identity theft and data monopoly. Companies like Amazon, Flipkart have your credit card and debit card information and they can sell this to anyone at monopoly rates. It is just an example and they don’t do it. But the problem is real and identity theft is happening rapidly. Therefore to secure this problem the data could be stored in an uPort app and this can only be accessed by you. With this technology, your data remains safe in uPort and it cannot be accessed by any company

There are more than a million accounts registered on Etherscan.io that are using and have effectively implemented the smart contract. This number is still rising every day. Apart from this, the number of Dapps is also increasing. There are approximately 1300 Dapps on Ethreum. Some of these apps are live and some are under development. The rising number shows that within few years smart contracts and Daaps will be part of our daily life. The market and opportunities are also immense in this field.

How To Learn Blockchain Technology In a Day?
Scroll to top