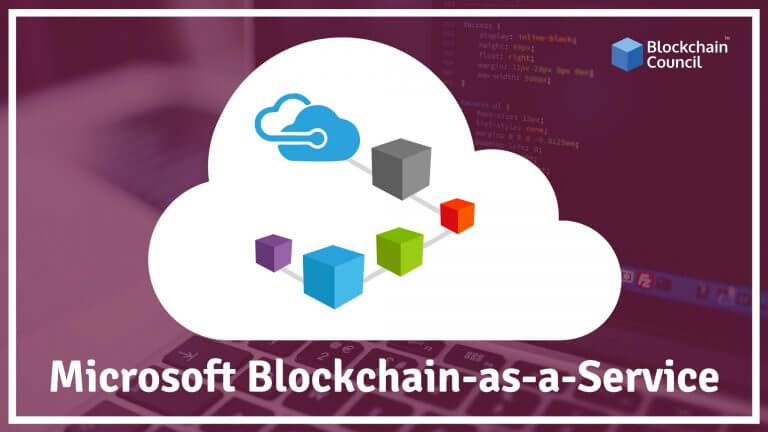 The Bitcoin blockchain technology is up and rising. There is no stop to it as it is becoming the most used method of transaction and payment. It is changing the phase of digital currency in an absolute way. The big time software industries are also busy doing their part in this field. Likewise, the Microsoft organization continues its blockchain method by doing continuous service push. This is to make their mark in the Bitcoin industry.

What is Microsoft Blockchain-as-a-Service? from Blockchain Council

Microsoft is powering up its effort to turn blockchain shared transactional-ledger technology into an Azure cloud service. IBM is also pushing hard and stomping to make blockchain technology a part of it services and app.

We all know that blockchain is the technology that underpins the Bitcoin. This technology is playing a vital role and making its mark in the industry to grow and give a secure and flexible transaction model. It is a shared ledger that can store the complete records of the transaction in it. These records are not just of cryptocurrency but other details also. The primary interest is especially those in banking and finance.

Microsoft’s initial foray into Azure blockchain as a Service (BAAS) came late last year with an offering on the Ethereum Platform with Consensus. Now there are packaged BAAS offerings in the Azure marketplace (Go Ethereum on Ubuntu and a VM running BLockApps STRATO).

More recently, Microsoft has joined hands with a C++ Ethereum client. Moreover, it is also working on an Ethereum on Windows Server offering. According to company officials of Microsoft, they also worked with Ripple, a cryptographic ledger software vendor and also proof-of-concept work with 11 other banks including UBS and Credit Suisse around blockchain.

In late January 2016, Microsoft made available a preview of a lab environment in Azure’s DevTest Labs to showcase the blockchain-related services. The primary offering of this service was to decouple the blockchain technology from virtual machines.

Microsoft is working hard and progressing their context in the field Bitcoin technology. Cryptocurrency is developing to be the next major economy shifter. The primary goal or objective of Microsoft is to make Azure BAAS available in a certified blockchain market place by the end of this year. This initiative is progressing to help individual use the blockchain without any interference. The primary focus is to add blockchain partners of all kinds, rather than trying to pick a limited number of potential winners.

What Are The Differences Between Proof-Of-Work & Proof-Of-Stake?
Scroll to top