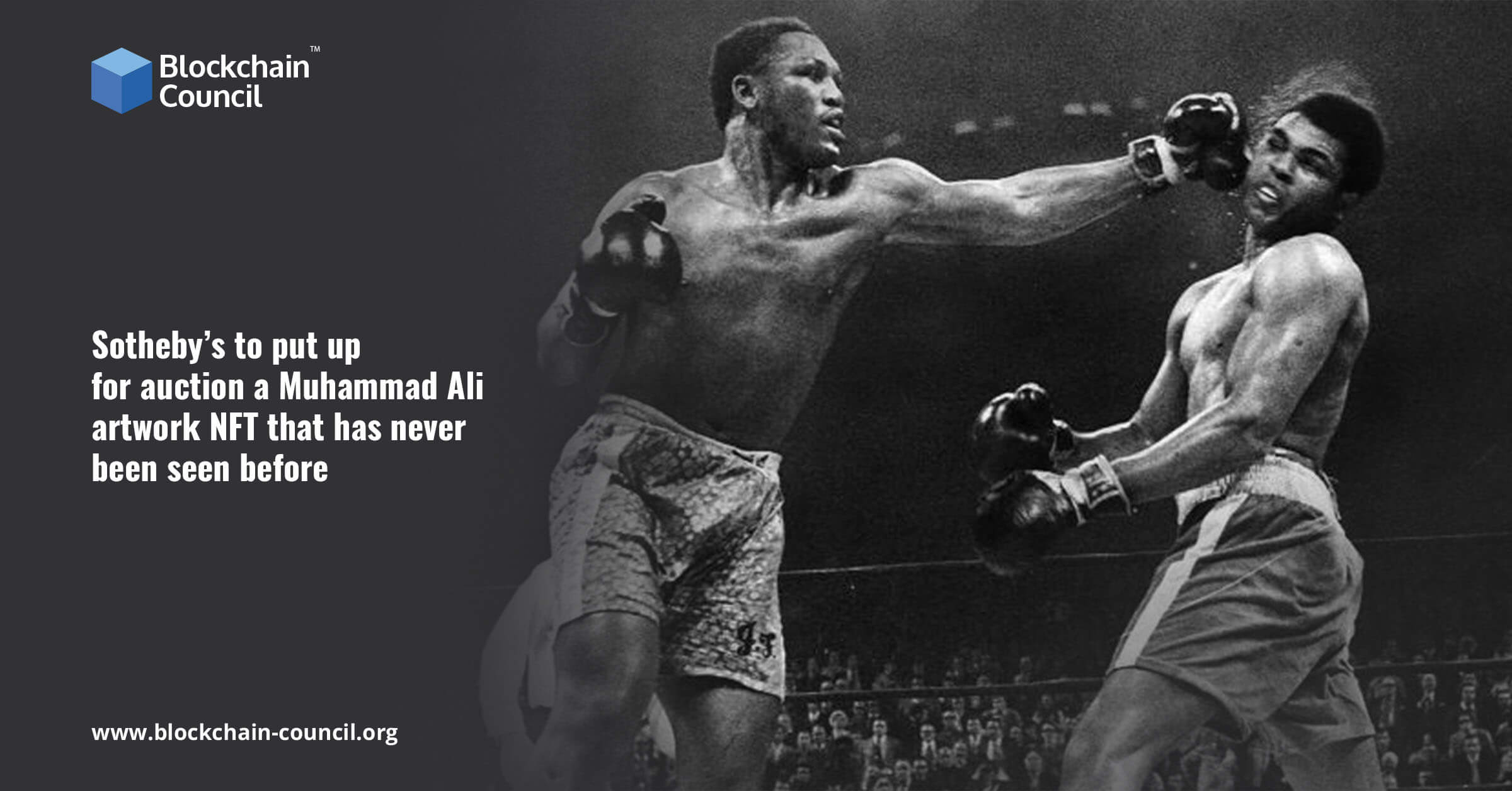 This Friday Marks the opening ceremony of the Summer Olympics, 2021. Coinciding with the event, today is also the day when the fine auction institute, Sotheby’s in collaboration with Muhammad Ali Enterprises will be releasing a no fungible token or an NFT that will feature an original artwork by Muhamad Ali that has never been seen before. This will be the first time that the art will be revealed using the NFT technology.

Lonnie Ali, who is the wife of Muhammad Ali explained that the art that her husband had created was on display in their home for almost a couple of decades. She added that the original artwork that was created using mixed media, was on display in their home for about a period of around 20 years and it was a part of the collection of art that the world renowned boxer had gathered over the due course of his life. She exclaimed that it was indeed extremely exciting for her to see that the artwork had been transformed through the NFT technology. She also exclaimed how extraordinary of a person her husband was and said that she believes just like a non fungible token exists forever, his husband, the great Muhammad Ali will also live forever through this piece of digital art.

The unveiling of the Muhammad Ali artwork NFT is going to take place on the same day as the opening ceremony of the Olympics 2021 and Sotheby’s “Olympic Collection” reveal on Saturday. The Olympic collection from Sotheby’s will present 5 of the most unique and rare items from the history of the Olympics and also other sports memorabilia. The special non fungible token of Ali’s artwork depicts his version of the famous “Fight of the Century” that took place back in 1971. The fight had taken place between Muhammad Ali and Joe Frazier at the famous Madison Square Garden in New York. People poured in hundreds in anticipation to watch these two rivals face off each other in the ring. This fight is still considered to be one of the best fights in the history of boxing.

Muhammad Ali Enterprises and Sotheby’s announced that the unveiling of the non fungible token os Ali’s original artwork would commemorate the 50th anniversary of of this legendary fight between Ali and Frazier. They also gave an idea of how the NFT has been created and what it is supposed to look like. So basically, the NFT art has been created as a loop of 50 seconds where the crowd can be heard cheering and erupting in applause for a straight 15 seconds. These 15 seconds actually denote the fifteen rounds that took place while the match went on. Ali and Frazer fought each other for fifteen rounds straight. No wonder the match was so extraordinary and legendary that people keep talking about it even to this day!

Brahm Wachter, who is the chief person of the streetwear and other modern collectibles, commented on Muhammad Ali’s NFT art being auctioned at Sotheby’s. He mentioned that this is the first time in history that the luxury auction house will be presenting an NFT related to sports.

The executive from Sotheby’s further added that there could have been no better way for Sotheby’s to make an entrance into the market of sports memorabilia and art, than to celebrate the creative side of the world-renowned boxer, Muhammad Ali, through this unique and innovative non fungible token or NFT.

He further added that this auction of Muhammad Ali’s tokenized version of his original artwork, is a perfect compliment to the upcoming Tokyo Olympics 2021. This is because the champion boxer and larger than life Muhammad Ali was also an Olympian. Muhammad Ali had won the prestigious gold medal in the year 1960 for United States of America. Not only that, he also had the honor of lighting up the famous Olympic Cauldron in the year 1966 following his outstanding win at the Olympics.

Back in the month of March, an entire non fungible token (NFT) collection of Muhammad Ali was introduced, naming it as “the Ali Collection”. In that collection also, his bout with the famous Joe Frazier from the year 1971 had been featured. The NFT collection has been unveiled by Ethernity Chain in mutual collaboration with the museum of the Muhammad Ali Center.

Amazon may soon start adding Bitcoin and other cryptocurrencies as payment ...
Scroll to top