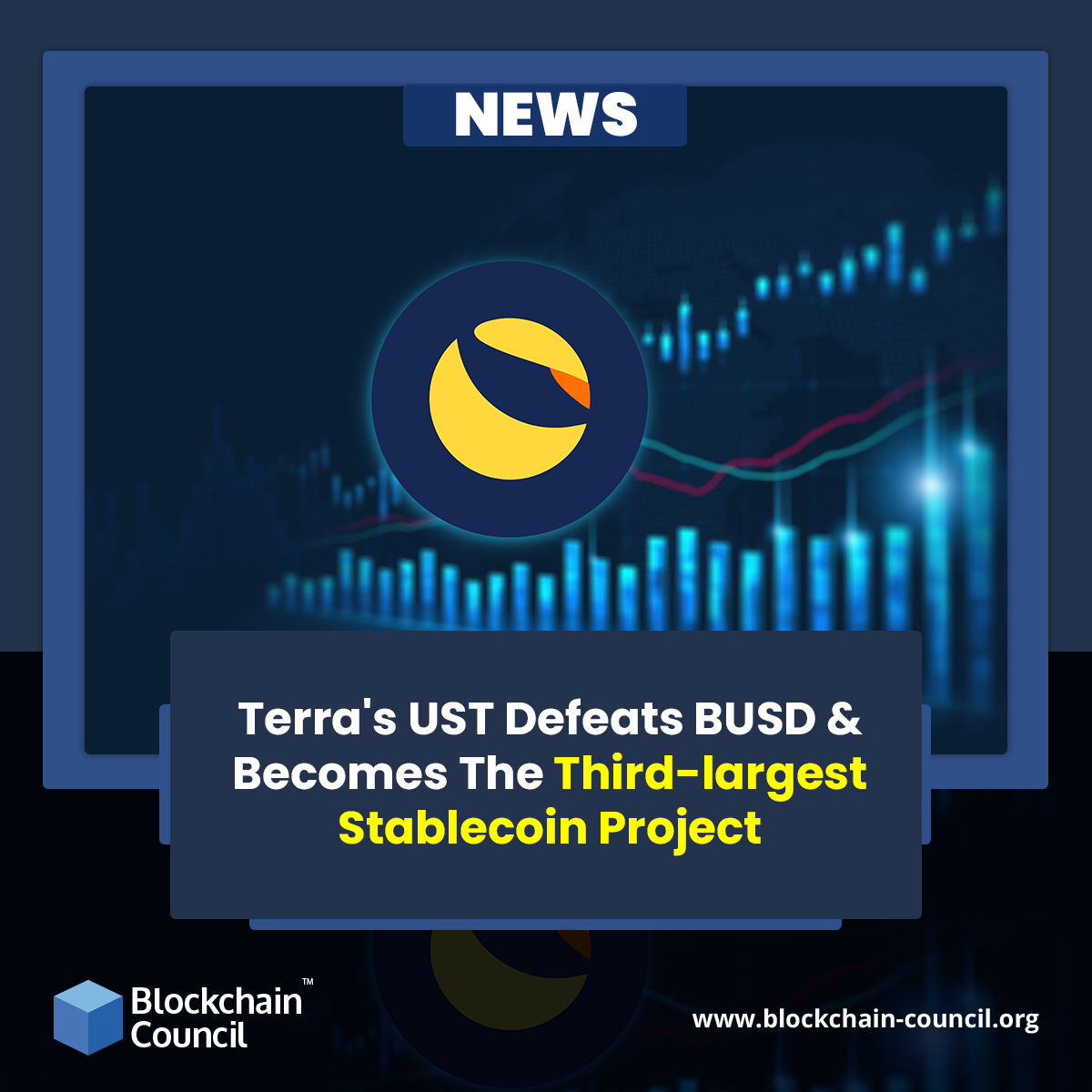 Working as a top-tier decentralized channel, Terra has taken the crypto industry in a storm by successfully placing Terra USD (UST) as the third-largest stablecoin in the market space. The popular stablecoin has recorded a whopping 15% rise in its market capitalization in the past 30 days to reach a value of $17.5 billion at the time of writing. Launched in September 2020 as a USD-backed currency, UST has managed to remove Binance USD (BUSD) which has a market cap of $17.46 billion to sweep away the third spot in the token rankings.

According to the report, the stablecoin is presently behind premium projects such as Tether (USDT) and USD Coin (USDC). The total market cap of Tether is presently valued at $82.8 billion whereas this figure stands at $50 billion for the USD Coin. Undoubtedly, there exists a huge gap between the top two places and the third spot grabbed by Terra’s UST. However, this does not lessen the achievement of the project as it has managed to secure the position by defeating a top player like BUSD. The recent trends have shown a surge in the popularity of stablecoins as investors see them as a secured investment tool pegged against fiat money.

The data reports reflect a striking rise in the market cap of the UST coin since mid-November and has managed to record a 525% rise in its worth since then. Despite all this, Terra’s UST is far behind BUSD in terms of trading volumes. Where BUSD has accounted for $2.26 billion worth of trading volume in the past 24 hours, UST has managed a trading volume of $431.79 million within its ecosystem. Terra has been in the news recently for multiple reasons. One of them is the announcement made by its co-founder Do Kwon. The spearhead stated that the project will accrue $10 billion worth of BTC coins to peg its UST reserves. The price of the LUNA token has been quite low as it plummeted by 12.4% to reach $77.31 in the past 30 days span.

According to CoinGecko, the market value of Terra's stablecoin UST reached $17.5 billion on April 18, surpassing BUSD's $17.4 billion, becoming the third-largest stablecoin after USDT and USDC. But UST’s trading volume is very low, only 1/5 of BUSD.

The courses offered by Blockchain Council can help you hone your skills in cryptocurrency trading and development. The platform has a wide range of certifications related to different fields of the crypto industry. The participants can choose a course based on their interest to polish their knowledge in the sector.

Cryptocurrency vs Tokens – What’s the difference
Scroll to top