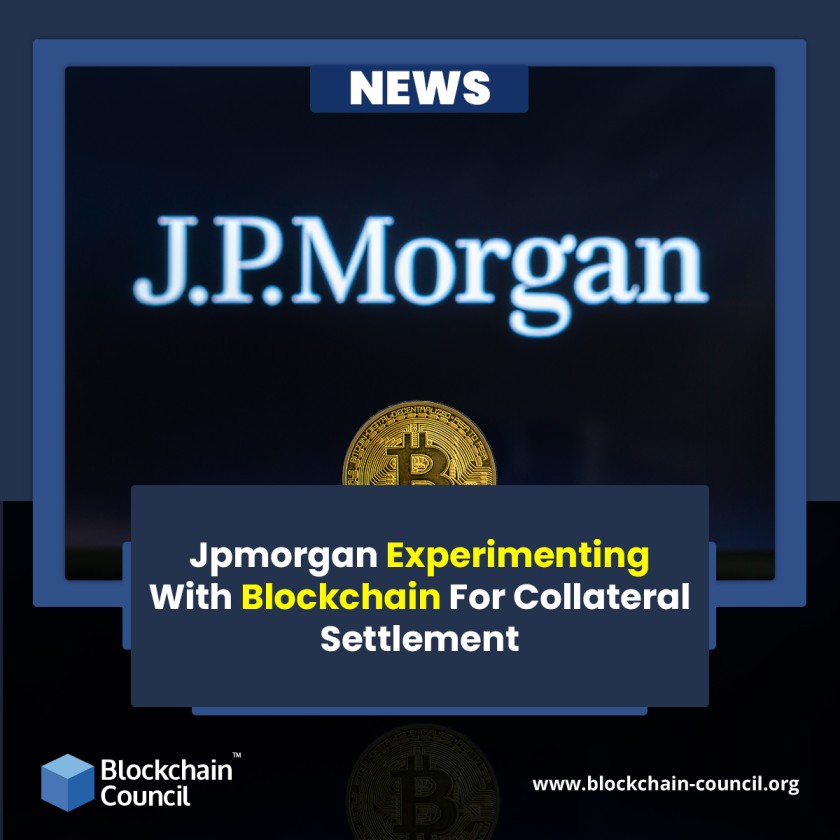 JPMorgan Chase & Co, a multinational investment bank, is apparently testing the use of its own private blockchain for collateral negotiations.

JPMorgan’s two businesses transferred a tokenized version of Black Rock Inc. money market fund shares as a part of their trial transaction on May 20, according to a tabloid.

JPMorgan’s bigger ambition for its private blockchain, according to the bank, is to allow investors to submit a wide range of assets as collateral, which may be utilized outside of usual market hours. It specifically mentioned stocks and fixed income.

JPMorgan’s worldwide head of trade services Ben Challice commented, “What we’ve accomplished is the frictionless transfer of collateral assets on an immediate basis.” Although BlackRock was not a counterparty, it has been substantially involved in the programme “from day one and is investigating usage of this technology,” according to the company.

JPMorgan has been interested in crypto and blockchain technology for a long time, and in late 2020, it launched Onyx Digital Assets (ODA). The project is a “blockchain-based network that facilitates the processing, recording, and Delivery-versus-Payment (DVP) exchange of digital assets across asset classes,” according to the description.

While it’s questionable whether JPMorgan exploited the ODA in this case, it’s designed to allow clients to swap cash for various forms of tokenized collateral, provide intraday liquidity, and use the bank’s electronic payments architecture and JPM Coin token.

JPMorgan’s Blockchain Launch and the ODA leader, Tyrone Lobban, said the firm is attempting to forecast a future in which blockchain technology may be utilized to deliver a broader variety of traditional financial services:

“As the volume of financial transactions conducted on the public blockchain grows, we want to ensure that we are not only ready to sustain them but also ready to provide related services.”

BNP Paribas, a European bank, made its first tokenized fixed income market exchange through the ODA earlier this week. The head and MD of sales at BNP Paribas Global Markets and US repo trading, Christopher Korpi cited the criticality of being able to utilize blockchain technology to optimize business handling procedures:

“With tokenized assets and Onyx Digital Assets, exact intraday liquidity management will be possible.” As a result, they may be essential for increasing the mobility of collateral, settling security claims, and, eventually, lowering systemic risks by reducing intraday credit. The intraday fungibility of UST and USD Cash will be further enhanced by Onyx Digital Assets.”

If you want to learn everything you can about cryptocurrencies and blockchain technology, the Blockchain Council’s extensive certifications are for you. During the sessions, students get objective and practical information in a clear and concise manner. They’re light on pocket, and they provide you direct access to a rapidly growing market.

Pace up with the trend on the newest blockchain industry news by joining our Discord, Reddit and Telegram groups.