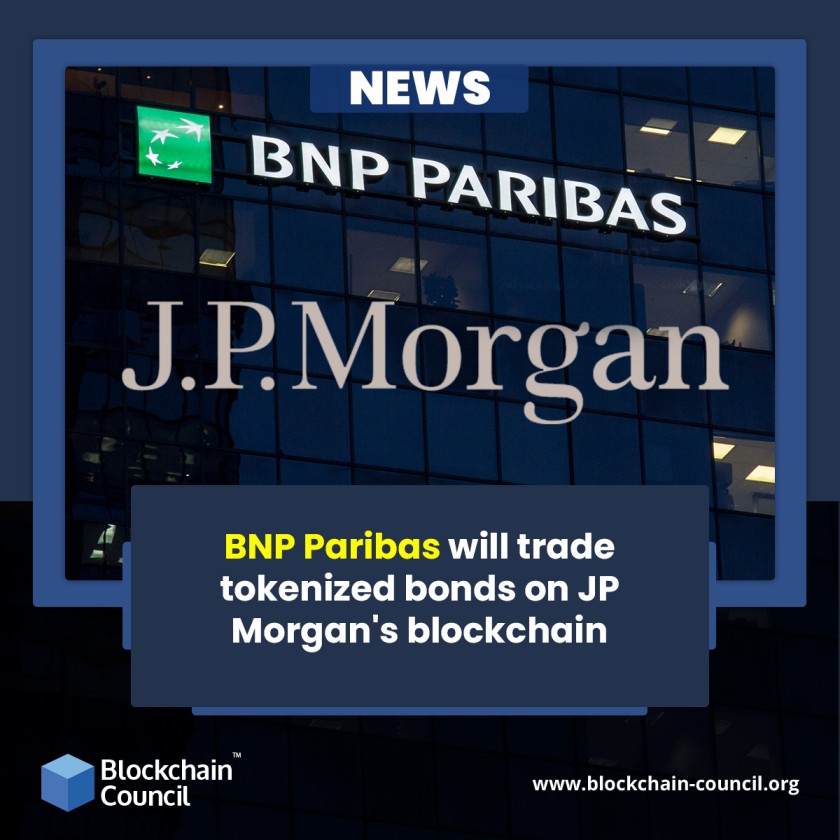 BNP Paribas, a French banking powerhouse, has teamed up with J.P. Morgan’s Onyx Digital Assets blockchain platform. The collaboration is a part of a strategized step that will allow BNP Paribas to deploy fixed-income assets tokenized copies for short-term transactions, according to a Financial Times report.

Following the 2008 financial crisis, banks are required to hold large quantities of liquid assets, such as bonds, as a safety net. Banks, on the other hand, require cash to fund their balance sheets and maintain their derivatives positions. As a result, bonds are used as security measures for loans that last anywhere from a few hours to a few days that is short-term loans.

The repurchase (repo) market is where these loans are made. Three-quarters of repo transactions are secured by government bonds, seeking to make them as one of the most valuable fixed-income assets. Central banks also utilize the repo market to execute monetary policy.

As a part of this collaboration, BNP Paribas can stake its own bonds for a few before repurchasing them at a slightly higher rate. Understanding the other way around, BNP Paribas will be authorized to lend tokenized US government bonds for a few hours without the assets altering their transaction records. Treasury bonds are represented by the digital tokens exchanged on Onyx Digital Assets.

The loan terms, such as length and settlement period, are governed by a smart contract. The smart contract ensures that the collateralized bonds are released at settlement by reducing counter-party risks and that the borrower has enough assets.

BNP Paribas uses the contract for two purposes: securities financing and intraday repo. It is, however, part of the bank’s broader efforts to integrate blockchain into its operations. “We consider this work as part of our efforts to utilize the technology throughout the whole trading and operations lifecycle as the market develops,” said Joe Bonnaud, BNP Paribas’ COO of global markets and head of engineering.

While only US treasuries are now eligible for tokenization, J.P. Morgan is considering broadening the eligibility requirements to include other fixed-income securities.

Despite CEO Jamie Dimon’s condemnation of Bitcoin, J.P. Morgan has paved the road for banks to enter the crypto space (BTC). Onyx Digital Assets has handled about $300 billion in short-term loans since December 2020. J.P. Morgan was one of the first banks to enter the metaverse realm at the beginning of 2022.

According to Tyrone Lobban, the president of Onyx Digital Assets, the bank is considering utilizing Onyx to provide institutional investors with access to the realm of decentralized finance.

The Blockchain Council’s broad certifications are for you if you want to know everything there is to know about cryptocurrencies and blockchain technology. Students get subjective and practical knowledge in an easy-to-understand style during the courses. They’re inexpensive and provide rapid access to an expanding market.