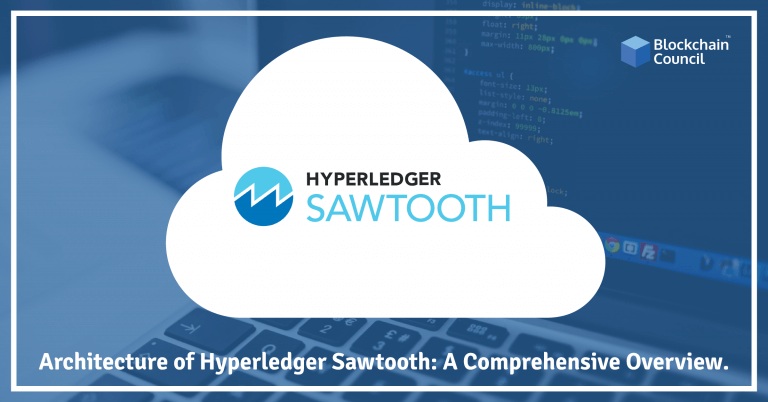 Launched in 2016, Hyperledger is a multi-project collaborative effort hosted by the Linux Foundation. It includes leaders from various industries such as supply chain, technology, manufacturing, Internet of Things, finance, and Banking. It creates enterprise-grade, distributed ledger frameworks for supporting business transactions. Hyperledger is an operating system for micro-currencies, data-sharing networks, marketplaces, and decentralized digital communities.

What is Hyperledger Sawtooth?

Hyperledger Sawtooth is an open-source project under the hyper ledger umbrella. It is a modular enterprise blockchain platform which is used for building distributed ledger networks and applications. The main reason for using distributed ledgers on the Hyperledger platform is to keep smart contracts safe, especially when it comes to enterprise use. It is referred to as modular because it helps enterprises in making policy decisions and its core design allows applications to choose their own consensus algorithms, rules, and permissions in a way that suits and supports their business needs.

One defining goal of distributed ledgers like Sawtooth is distributing a ledger among participating nodes. The framework of Hyperledger Sawtooth is being developed by Intel. It is a blockchain framework which focuses on agility. The framework offers basic functions such as communication between network nodes and storing data on the architecture and the blockchain for plugging consensus algorithms and smart contracts.

Let’s now have a detailed look at the architectural components of a Hyperledger Sawtooth and the functions of each. 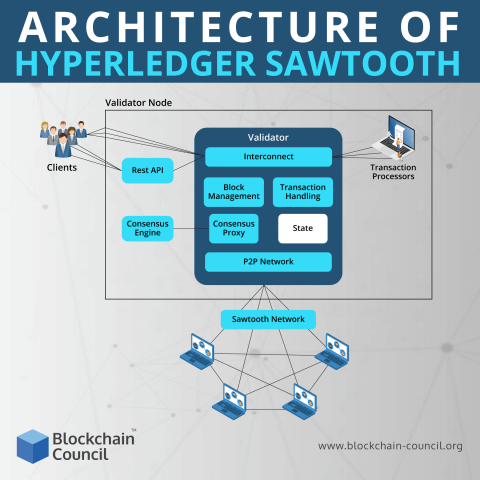 Hyperledger Sawtooth follows an asynchronous client/server pattern. The pattern is as follows:

Hyperledger Sawtooth provides a pragmatic RESTish API for clients to interact with a validator using common JSON/ HTTP standards. It is a separate process which allows for the submission of transactions and reading of blocks with a common language-neutral interface. The REST API mostly treats the validator as a black box for submitting transactions and fetching results. It is comprehensively documented using the OpenAPI specification. It acts as a single source of truth which documents every aspect of API. It is readable by both machines and humans. In order to improve quality, the REST API supports a few common HTTP status codes. Some of the codes are 400, 404, 500, 503, 201, etc. For example, 404 indicates ‘Not Found’ which means the request was well formed but there is no resource.  503 indicates ‘Service Unavailable’ which means REST API is unable to contact the validator.

REST API uses a JSON envelope to send metadata back to clients in an easy and customized manner. If anything goes wrong while processing the request, the REST API sends back a response envelope with one property: “error.” It contains three values such as code, title, and message and these explain the nature of the problem that has occurred. The code is fixed and can’t be altered whereas the title and the message can be reworded. It also supports query parameters to help specify how a request to a validator should be formed. Some parameters have their own specific endpoints and not every endpoint supports every query. The endpoints include RESTful references to resources available in the Sawtooth ledger that may be of interest to clients. These might include blocks, transactions, and RESTish metadata.

Transaction processors handle business logic and they have the authority to allow or decline transactions from being added to the state. When a client interacts with the network by sending a transaction, these validate the transactions, apply the changes, and add them into the next block. Validator nodes make sure if the signature of a transaction is valid.

A transaction processor comprises of two top-level components such as :

There are three processors which run in this component:

In Hyperledger Sawtooth, blocks and batches are validated in a similar way by authorized nodes. The block validation process checks for on-chain transaction permissions to verify the entity who is allowed to issue blocks and batches. Following this, the on-chain block validation rules added through setting proposals are applied to the block. These batches are then sent to the transaction scheduler. The network layer is responsible for communication between the validators of a Sawtooth network. It performs activities such as interconnecting REST API, transaction processors, and clients. Apart from this, it performs the major functions of discovering peers on the network, handling transactions, managing blocks, and working in support of the consensus engines.

In order to know more about Hyperledger and to become an expert in the same, you can enroll in the Certified Hyperledger Expert and the Certified Hyperledger Developer certification courses offered by the Blockchain Council. Blockchain Council comprises of an authoritative group of subject experts with a passion for blockchain technology. It is a private de-facto organization which works individually and proliferates blockchain technology on a global scale. Enrolling in these certifications will provide you with the much-needed knowledge and expertise to assist enterprises to build hyperledger-based blockchain applications.

Why Data Scientists Should Use Blockchain Technology
Scroll to top