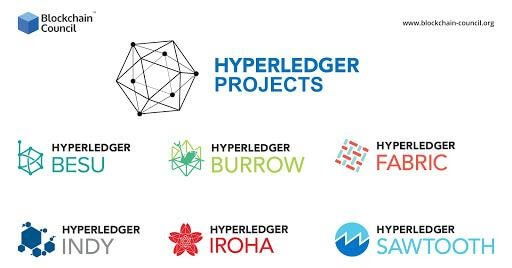 Hyperledger came into existence in 2015, is an open-source global collaboration that helps to develop enterprise-grade and distributed ledger frameworks to promote business transactions and encourage cross-industry blockchain technologies. It was introduced by the Linux Foundation, which is an open-source distributed ledger framework and codebase where enormous projects and production systems across the globe come under its category. This technology comes with several free tools and frameworks that allow enterprises and blockchain developers to build blockchain-based solutions for their enterprises. Hyperledger aims at educating individuals about the market opportunity that blockchain holds and, in addition, provides a community-driven, open infrastructure supported by technical and business governance.

Now, as we have understood what exactly is Hyperledger technology, let’s talk about its popular projects that are all open source. Major Six Hyperledger projects are as follows:

Hyperledger Besu was initially introduced to reduce entry barriers for enterprises and maintain and scale mainnet. Besu is an open-source Ethereum client developed under the license of Apache 2.0 written in Java programming language that can run on public and private-permissioned networks. In addition, it can also run on test networks such as Rinkeby, Gorli, and Ropsten. The Besu’s API supports Ethereum functionalities such as smart contract development, dApps development, and Ether mining. Besu’s official website defines it as one of the Ethereum clients’ software that implements the Ethereum protocol.

Hyperledger Besu’s new APIs were launched this year on 26th February, allowing everyone to write custom plugins for Besu. This new Plugin API enables users to input data from any Besu network and feed it into the rest of their application. The current version of besu is Version 1.4 that supports multi-tenancy, end to end TLS support, private state migration, and much more functionalities, including better NAT support and new tracing APIs.

Burrow is a fully-fledged blockchain node and smart contract execution engine that focuses on simplicity and speed. Burrow runs and executes Ethereum Virtual Machine and Web Assembly (WASM) smart contracts and are synchronized using the Tendermint consensus algorithm. It is an open platform that is mainly optimized for public and permissioned blockchain; however, it can also be used as private blockchains. This blockchain-based project acts as a permissioned smart contract engine that helps develop and execute blockchain-based applications securely and efficiently for enterprises and businesses.

Fabric, a private and permissioned network, is one of the Hyperledger blockchain projects that have a ledger, uses smart contract functionalities, and offers a system that enables participants to manage their transactions like other blockchain projects. Fabric offers a modular architecture that aims at maximizing blockchain privacy, flexibility, and also facilitates decision-making processes. It offers a collaborative approach for developing blockchain technologies through the community process, with intellectual property rights that promote open development.

Explicitly designed for identity-based solutions, Indy is a distributed ledger that has several tools, libraries, and components for digital identities rooted in blockchains. Its identity-based solutions allow users to get the sole ownership of their very own identities. The best about this project is that it is interoperable with other blockchains and can be used standalone powering the decentralization of identity.

Hyperledger project ‘Iroha’ was introduced for easy integration into the enterprise environment, which is easy to deploy and maintain with no extra complexity of the architecture that is hard to comprehend. It makes it super feasible to integrate into any existing enterprise networks. It is an open-source project and works on Linux and Mac OS, with several mobile and desktop libraries. One can use this platform for interbank settlement, central bank digital currencies, payment systems, healthcare, and logistics, among others.

Hyperledger Sawtooth is an open-source blockchain project under the Hyperledger family that offers an exceptional blockchain application development allowing developers to specify their business rules without understanding the underlying design of the core system. It has a flexible and modular architecture and supports both permissionless and permissioned architectures. It intends to maintain ledgers distributed and make smart contracts safe for enterprise usage. It supports EVM compatibility, along with parallel transactions.

Hyperledger technology is an open-source global collaborative created to advance cross-industry blockchain technologies. It aims to make blockchain development easier and more straightforward. One can use hyperledger projects across various domains, including finance, banking, healthcare, supply chains, manufacturing, and technology.

What Is OpenChain Technology?
Scroll to top