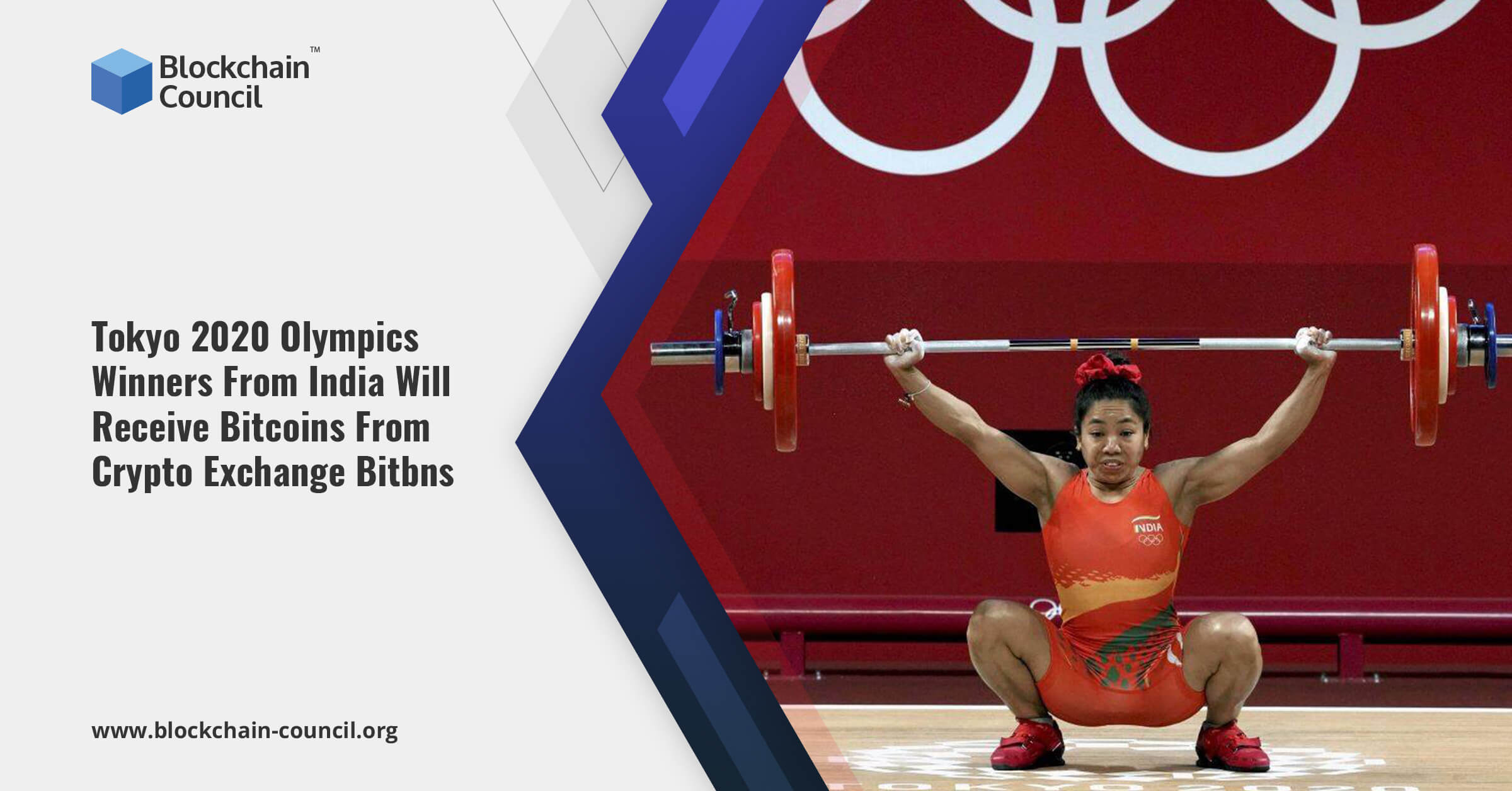 In an effort to honour the winners at the Tokyo Olympics 2020, an Indian cryptocurrency exchange named Bitbns is willing to reward the winners with Bitcoin SIPs which are valued at lakhs. SIPs stands for Systematic Investment Plans and the company is offering a safe and automated investment opportunity for the winners of the Olympics, which will eliminate the hassle of temporal decision making in regards to investing in Bitcoins.

The company declared that the Olympic winners will bear entitlement in order for them to open the Systematic Investment Plan (SIP) on the exchange platform that they are providing. They have clearly outlined their plan details which states that the plan will start from Rupees 2 lakhs for the winners of the gold medal, 1 lakh Rupees for Silver winners and Rupees 50,000 for the winners of the Bronze medal.

Averting great hurdles, Chanu Saikhom Mirabai, or better known as Mirabai Chanu from Imphal East District of Manipur, has won the silver medal in Weightlifting, for the country at the Olympics and made the whole nation proud. And then there is PV Sindhu, who has secured the bronze medal in Badminton. She is the first woman from the Indian subcontinent to win two medals in her Olympics career. Bitbns is willing to start their initiative with Mirabai Chanu for her obvious Silver victory. Both the winners will have the amount automatically credited to their respective accounts. The athletes will be able to access their account balance once they have completed their respective KYC authentication.

According to the announcement by Bitbns, the company is providing the athletes this SIP which will basically be structured for three five-year terms. Therefore the company is not only providing them an immaculate exposure to the world of digital assets but at the same time, they are also making sure that they can actually generate earnings as a fixed source of income on a systematic basis over a long period of time, through their platform.

Gaurav Dahake, who is the Founder and CEO of Bitbns, stated that these athletes, often belonging from humble backgrounds, dedicate their whole lives to a single cause, such as winning medals at the Olympics so that they can bring honor and praise to our nation. Hence, as a small token of appreciation and tribute to their courage, sacrifice and dedication, they have decided to take this initiative by creating a Bitcoin investment plan for the Olympic heroes of India.

He also stated that this initiative will largely help to promote the culture of excellence in our Indian context. He even congratulated Mirabai Chanu, Lovlina Borgohai and PV Sindhu for their remarkable performance in the Tokyo Olympics and for bringing home the medals of course.

The Bitdroplet Systematic Purchase Plan or SPP available on the exchange platform of Bitbns allows the provision of making investments in cryptocurrencies through an SIP. The platform allows the users to make small investments, as low as Rs. 100 per day in leading cryptocurrencies that are dominating the market. There are provisions for regular installments in the form of daily, weekly or even monthly payments. This is to encourage people to make small investments according to their convenience and after having studied the market well.

He further added that Bitcoin and Ethereum have been the top-performing cryptocurrencies of the previous decade and they have given unimaginable returns to those who invested in them at the right time. He said that he really wants our Olympic heroes to indulge themselves in this ongoing crypto revolution and benefit from it.

He explained that people can deposit INR with the help of UPI like Google Pay or Phone Pe in their virtual wallet after which the deposited amount will automatically be invested to purchase cryptocurrency as per the periodicity chosen by the user. In order to cash in, all the user has to do is just sell their share of crypto and the amount will directly be transferred to their bank accounts, through the Bitbns platform.

So far, India has been able to win three medals at the Tokyo Olympics 2020. Ravi Kumar Dahiya, the sturdy Indian wrestler who defeated Nurislam Sanayev from Kazakhstan, on Wednesday in the semi-final match and is now headed straight for the final match aiming for the gold medal. He is the second wrestler who has been able to succeed in reaching the finals after Sushil Kumar had made it in the finals in London Olympics in the year 2012. Meanwhile on Wednesday, Neeraj Chopra, who is a javelin thrower participating in the Tokyo Olympics, has successfully entered the finals after a staggering throw of 86.65m which got him in the first position of Group A contest. On the other hand the Indian women’s hockey team suffered a defeat against Great Britain as they were contesting for the bronze medal today on August 6, 2021.