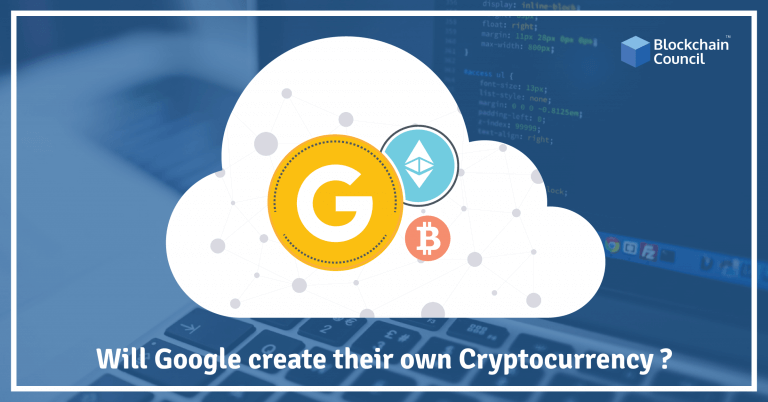 The market today is buzzing with news about cryptocurrencies and blockchain. You would hardly find a day when these technical jargons make a part of general conversation. It was in 2008 when Bitcoin surfaced, and since then we have a plethora of other cryptocurrencies making the way in the market. The reason behind the growing popularity of these digital currencies was ease of transactions, lesser regulations, free from intermediaries and quick transaction time.  The path for cryptocurrencies was not a cakewalk.  Initially, Bitcoin didn’t gain the recognition which it has today. It is still considered as a bubble which many people believe will burst in the coming years. However, there are many propagators of this concept, and the latest buzz is about Google coming up with its currencies.

Will Google throw a new Googly-

When it comes to Google, it is a panacea for all the problems. You have a question Google has the answer. It has been the forerunner of new technology. There are speculations about Google stepping in the world of cryptocurrencies. However, there is no confirmed news, but the question that arises here is why would a centralized system like Google step into a decentralized system and what benefits it is looking at if at all it is making its way to launch its digital currency.

Why are techy behemoths not so keen on cryptocurrencies?

When the world is running after cryptocurrency why are bigwigs like Amazon and Google are keeping it at bay? There are various speculations about it, let’s analyze the reason why Google has still not taken any concrete decision on the same.

Not a monetary benefitting move – Creating cryptocurrencies might not make any economic sense to these companies. The primary objective behind forerunning any technology is to make money out of it, where when it comes to the blockchain, the underpinning technology of digital currencies then it’s a non-profit concept. The objective behind blockchain is to create a decentralized system, handing over the control in the hands of the user which is opposite to the idea behind the techie biggies like Google.
Skeptical future- It’s an undenied fact that cryptocurrencies are a dicey concept with a blurred future. It doesn’t have many propagators and supports. Recently Facebook denied its advertisement on its platform, and the latest addition to this list is Google. The company announced banning of AdWords related to cryptocurrencies from June 2018. It has led to the downfall in the prices of Bitcoin. With such delusions surrounding this concept, it would not be a wise decision for a tech giant like Google to invest in this concept.
No regulatory authority- The primary concept behind the surge of cryptocurrencies is to create a regulation-free system of transaction. We all know that it is a decentralized economy which doesn’t involve any intermediaries. It is free from the governmental control, and hence transactions are free from any processing fee. However, if we dig deep into it, you will agree to the fact that in case of ay fraud, you would find it difficult to trace the money or get it back. Thus, Google might be staying away from this decision.

However, we cannot deny the fact that Google might not come up with something like this. Technology is ever-changing and is highly dynamic. As the need of the customer and demand from them will grow, it might incline Google to create crypto rewards functionality on its search engine. Furthermore, the cryptocoin might find utility in the self-driving car plan of Google. It will allow the autonomous cars to transact with each other or with toll booths on the go.

There are endless possibilities which Google or any other company can explore. Coming up with a crypto coin is not about registering one’s name in the league of creators. It’s about creating a system which can be beneficial for all.

My Take on this

Well, considering the pros and cons of this concept all I can say that if there can be any set of regulations which can be established making the system of cryptocurrencies transaction profitable. We might soon find companies like Google coming up with their currencies which would be more reliable and free from any hassles.

How To Run a Bitcoin Node in Google Cloud?
Scroll to top