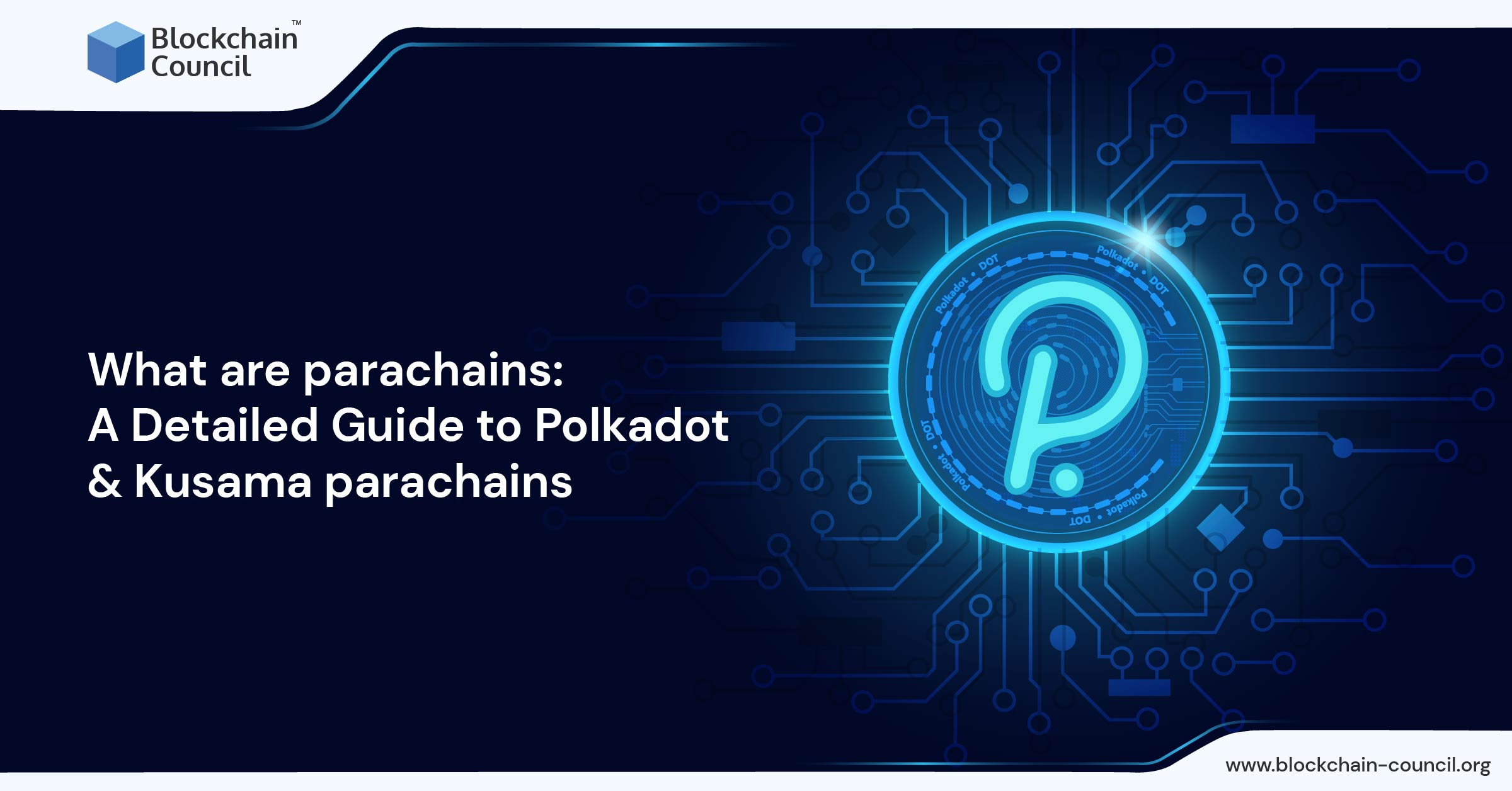 While ushering into the new decade of opportunities, cryptocurrencies have unlocked an era of decentralized finance where connectivity and privacy work together for unprecedented outcomes. Each day paves way for innovation and expansion within the domain, laying the foundation for potent product releases. Firms that work as a blockchain platform thrive to introduce powerful upgrades within the system lying in sync with user interests. The constant urge to improvise the existing worked as a catalyst for the development of ‘Parachains.’

Those who like to learn blockchain technology as an industry prospect very well know about its perks and limitations. Within the gigantic pool of lucrative advantages lay the strikingly loud disadvantages that mar the potential of the crypto industry. Scalability is one of the foremost concerns in this regard as it puts a huge question mark on the usability of blockchain technology.

Parachains came into the big picture to resolve the scalability issue. They work as a support system for the diverse ecosystem of Polkadot (DOT) and Kusama (KSM) blockchains. Launched in August 2020, Polkadot emerged as a strong substitute for the Ethereum network. The project gained popularity with its Proof-of-Stake consensus algorithm which was much more efficient and scalable than Ethereum’s proof-of-Work module. The inclusion of Parachains just fueled the expansion of Polkadot at a global level. Kusama, on the other hand, is Polkadot’s sister chain devoted to innovations and early-stage deployments. Renowned as a canary network, Kusama facilitates testing by supporting the release of unaudited codes right before they appear on the main network.

What is Polkadot Parachain?

Parachains are heterogeneous blockchains that run parallel to layer 0, popularly called the Relay Chain of the Polkadot and Kusama ecosystems. Getting its name from the word ‘parallel,’ Pachains thrive as a Layer 1 infrastructure designed to surge Polkadot’s core scalability by offering a simultaneous transaction trail against the main chain.

What makes Parachains unique is the fact that they are project-specific and customized data structures of the Polkadot and Kusama multichain environments. Interestingly, a parachain can have diverse implementations and characteristics, be public or private, clubbed with native distinct features, tokens, and other crucial elements. One can consider parachains as independent systems that work comfortably with the Polkadot ecosystem allowing swift cross-chain interoperability. Apart from interoperability and scalability, parachains provide for quicker and cost-efficient transactions. Using customizable tools, developers can design their projects with exclusive use cases and tokens. The user-friendliness of parachains’ infrastructure causes a surge in the adoption rate of Polkadot and Kusama.

Integrated to and safeguarded by the core Relay Chain, parachains are individual blockchains with entirely different tokens, governance structures, and functionalities. The Polkadot and Kusama ecosystems support a multitude of elements like security, interoperability, scalability, and governance for parachains as the latter remains connected to the main chain. Projects are incentivized to infuse Polkadot because they will use the latter’s existing infrastructure for security purposes. This frees them from the burden of having their own validator nodes. They can share the validator nodes of the mainchain easily. The central chain coordinates and manages everything within the system.

The swift cross-chain functionality of Polkadot helps to move and exchange assets and information between parachains. The process helps to unlock new applications and usage paradigms for the blockchain channel. Parachains can easily interact with external networks like Bitcoin and Ethereum via cross-network bridges. Blockchain technology training helps developers to work easily across cross-chains on Polkadot.

How are Parachains Connected to the Mainchain?

Parachains work alongside the central Relay Chain of Polkadot to offer additional support to the core infrastructure. The Relay Chain work as a link between the main chain and Parachains. It also provides for the primary features that are shared by all parachains and so are recognized as the focal support of the Polkadot and Kusama networks.

In addition to the Relay Chain, another important element in this regard is Substrate. The substrate is the chief blockchain SDK employed by developers to design the parachains that constitute Polkadot. The solution is often known as the revolutionary tool for web app development systems or Web3. Both Polkadot and Kusama use the Web3 feature of Substrate.

For the inclusion of a parachain within the Polkadot and Kusama network, it is necessary to have a parachain slot. The battle to secure a slot is quite a task as the slots are limited and the competition to grab them is very huge. The slots are sold via a permissionless candle auction that ensures the security and safety of the blockchain channel.

How do Parachains Work?

Unlike Ethereum, where DApp developers need to create and work within the pre-determined outlays of the blockchain channel. Surprisingly, this is not the case with Polkadot and Kusama as they allow developers to work setting their limits free. The networks facilitate creators to design their customized, independent parachains that suit their requirements. This indicates that each parachain is free to have its native characteristic elements such as block time, mining rewards, transaction fees, etc. Parachains are managed by collator nodes that maintain the full history of each parachain and support aggregation of the transaction data into blocks for easy addition to the Relay Chain.

Designed to facilitate interoperability, Parachains are tools dedicated to the future of blockchain evolution. The feature helps several layer 1 infrastructures to work together irrespective of their differences in specialization, objectives, and internal structures. This is why Polkadot supports only one criterion for the creation of a parachain so that each block follows the decided protocol.

Kusama and Polkadot parachains can view and access data across the ecosystem, interacting with one another and with external channels. The cross-chain composability helps parachains to indulge in the easy exchange of tokens and data. This includes the transfer of smart contracts along with off-chain data from oracles.

The issue of low scalability has always been a hot topic of discussion for industry participants. Scalability refers to the capacity of the network to execute transactions in a given span of time, characterized by the block size and frequency. Parachains enable the parallel processing of transactions in a decentralized module. Each parachain distributes and processes transactions side by side with others and thus enhances the throughput.

With a strong governance system, users can ensure accountability, transparency, and democracy within the ecosystem. Unlike Kusama, Polkadot parachains are free to follow any governance structure they choose. This reduces the probability of hard forks. In case a parachain plans to avoid having its own governance model, it can easily apply the existing one from the pre-designed Polkadot on-chain governance structures. When one takes part in trusted blockchain technology courses they learn about the importance of community participation in governnace systems. This gives users a sense of ownership and accountability in the firm.

What are Polkadot and Kusama Parachain Slot Auctions?

It is necessary for parachains to connect to the relay Chain to freely access Polkadot’s ecosystem. Undoubtedly, choosing the most viable projects here is a tiring and lengthy process. There is a constant constraint as to whom to connect and in what order. To simplify this process of blockchain development on Polkadot, we have parachain slot auctions.

Parachain’s canary network, Kusama manages parachain auctions right before parachains can connect to the Relay Chain. The auctions support testing and optimization of the projects. The parachains that manage to find a place on Kusama and work swiftly are likely to get onboard on Polkadot too. The main purpose of the auctions is to provide slots to projects that are willing to work on Polkadot or Kusama. The portal can run up to 100 parachains simultaneously.

With a view to enhance the efficiency of auctions, Polkadot shifted to a revamped candle auction version from the earlier auction format. The process is permissionless and so anybody can bid to participate in it. To participate in the auction, a project needs to create, build, and optimize a parachain via Substrate. Detailed knowledge about these can be easily attained through Polkadot certification programs that offer in-depth knowledge about auctions and parachain interoperability.

Post building, the project adopts a strategy and joins the parachain auction to place bids for the slots. The system follows an open bidding module where projects can see the other bids placed and re-bid as well. The verifiable random function or VRF helps to ascertain the exact moment of closing the auction. The highest number of DOT and KSM tokens that accept getting locked win the auction pact. The tokens are unlocked when the lease expires.

Parathreads are identical to parachains when it comes to developmental structure and dissimilar to them on the economic clutch. They connect to the Polkadot ecosystem via a pay-as-you-go system and have an auction for each block. The parathread feature is good for projects that want to work with Polkadot on a temporary basis and not permanently. It is also apt for projects that fail to grab a full slot during the auction. Parachains have a slower block time in comparison to parachains. However, they have same level of security and interoperability. The users can switch between parachain and parathread depending on the requirement and availability of slots.

The bygone year witnessed a significant rise in the popularity and market position of Polkadot. The surge continued to expand in the first quarter of 2022 as well, making Polkadot one of the strongest players in crypto. Towards the close of Q1 2022, 13 parachains managed to win a slot during auction accounting 127.8 million DOT which is 11% of the total supply.

The team has scheduled 28 more parachain slots through February 2023 hinting towards its widescale proliferation within the sector. The token price of DOT and number of user accounts reached all-time highs at the time of first parachain slot auction. The developer activity within the Polkadot ecosystem remained one of the strongest in the field. The company is now looking forward to implement the Cross-Consensus Message Format (XCM), parthreads, and performance upgrades. Polkadot course certifications can help investors learn more about the working module of Polkadot blockchain platform.

Parachain is a project-centric blockchain network that strives to enhance the efficiency of Polkadot and Kusama. With parachains Polkadot looks forward to aid user working within its cluster all by increasing security, scalability, and interoperability. Projects can easily connect to the main chain by grabbing a slot at the parachain auction which forms a crucial part of Polkadot training program. Several projects are struggling to get a slot of Polkadot parachain. The future shows a positive prospective towards growth and development of Polakdot.

If you are into crypto, then you can easily move to Blockchain Council. The platform offers best blockchain certification courses for participants. The blockchain course list offer subjective as well as practical knowledge to the participants.