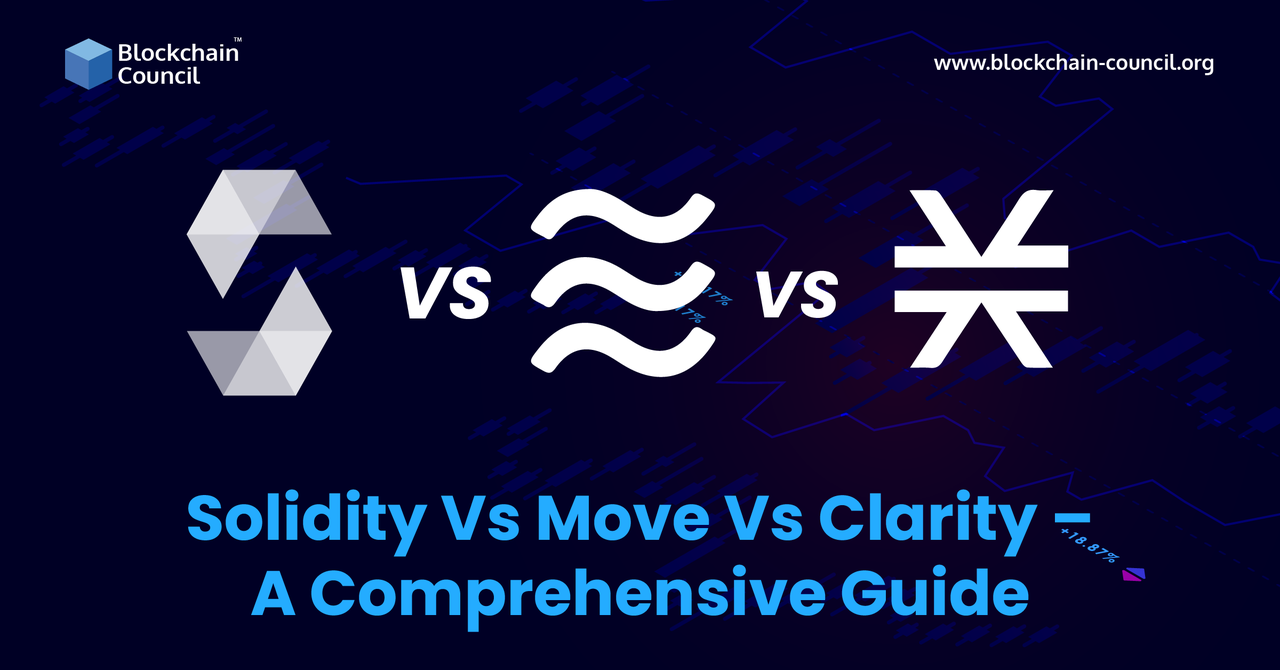 Technology is a fast and radically growing platform where blockchain has become one of the biggest technologies to enter the Web 3.0 era. While companies and nations are moving on to new technologies for finance and other sectors, Blockchain has become one of the main platforms to set up such applications. Since it is decentralized and constantly evolving, it has become the perfect platform for using smart languages as well. Smart contracts created on the blockchain platform allows the developers to create new and better apps that could integrate and coordinate with the user to develop better interaction.

Three of the major smart contract languages that are used in Blockchain are Solidity, Move, and Clarity which allows the developers to create these smart contracts, but with customized codes which makes it easier to use one different blockchain platform. Smart contracts are useful and needed to regulate the exchange of resources including financial transactions. Smart contracts are nothing but coded programs with instructions. To specify the conditions in a smart contract the developer needs to use a language which can be one of Solidity, Move, or Clarity, based on the user requirement. As a result, it’s critical to analyse and comprehend the differences between all three programming languages, as well as the advantages each may offer a blockchain application. Here are some of the major details of all the three that you need to know before developing a blockchain app on it.

This language is used to implement smart contracts in the Ethereum Virtual Machine. A small contract is basically a program that is created to handle the primary governing task. Since it is used in blockchain, the language can be used to create small contracts for tasks like voting, wallets, crowdfunding, and a lot more. The Ethereum ecosystem can be used to support different cryptocurrencies and to create blockchain solutions, Solidity is used.

How does solidity work?

Ethereum Virtual Machine or EVM is the main component on which Solidity works. The EVM is a virtual computer in the blockchain which runs the code as an application, which is inspired by human ideas. Solidity actually creates a machine-level code that runs on the EVM, which is then converted by the compiler for the processor to run the code. Remix online compiler, command-line compiler on a PC are some of the examples of compilers used in Solidity.

How can solidity be used in Ethereum?

People who created Ethereum were also the people behind the evolution of Solidity, it is why it was created on the platform of EVM to create various types of contracts. Now, these contracts created for Ethereum help to create a smart contract that is used to implement business logic, which further helps to generate a chain of transaction records. Since Solidity is the core language used in cryptocurrency like Ethereum, it creates a smart contract with high-level program codes.

Solidity differs from other innovative contract languages in the following respects:

Just like Solidity was a programming language for EVM, Move is a programming language for Diem Blockchain. However, Move is not like Solidity. Infact, the origin of Move happened due to the renowned issues that were found in Solidity. It is basically a bytecode language that is used to create smart contacts as well as custom transactions on the blockchain. It mainly tries to focus on two major digital assets which are scarcity and access control. Where scarcity prevents any double-spending and imposes restrictions on assets creation, Asses control deals with maintaining ownership and privileges.

Move language basically has three major components which are Types, Struct, and Procedures. The Types are primitive data types used in it such as Boolean, Integer, fixed-size byte arrays, and address data type. Structs are basically restricted and unrestricted which are resource structures and general structures. Procedures are simple methods in the Move programming language.

Where is it used?

Move programming language was developed to create new financial applications with services that should not be limited to a certain group of people only. Since it was developed from Diem Blockchain, its initiative was to bring financial inclusivity for everyone. The programming language was created to endure applications that ensure a global financial infrastructure and currency which can be used by people the world over. It basically provides a safe programmable foundation that is used to implement Diem currency and other business logic for financial institutions. It enables users to write programs as blockchain applications that can be directly integrated with the digital assets.

Move differs from other innovative contract languages in the following respects:

Clarity comes with the feature of interpretability which makes sure that the program code could be executed on all the blockchain nodes with flexibility. The language also makes sure that there are no compiler bugs and it also addresses the issue. Clarity offers different types and also type checkers which reduces the number of bugs substantially in the program. It works with the aspect of certainty and provides static analysis of the while call graph.

Where is it used?

Clarity differs from other innovative contract languages in the following respects:

Differences Between Solidity, Movement, And Clarity

While all the three programming languages are used to create smart contracts for blockchain developments, they still differ from each other in various aspects.

The first aspect that differentiates between the three is the blockchain platform they are based on. While Solidity is based on the Ethereum platform, Move is based on Diem, and Clarity is based on Stacks 2.0.

While executing the code, the compiler is a necessary requirement and for that Solidity and Move are two languages that require compilation. However, Clarity is the only one that does not require the compiler feature as it is an interpreted language.

While Solidity and Move are Turing complete programming languages, Clarity is intentionally tailored for turning incompleteness for preventing issues related to Turing.

This process selects specific implementations and functions the user select to cal at runtime. While SOlidity plays the odd one in this case with support for dynamic dispatch, Move and Clarity does not support it.

If the user decides to add custom individual decisions in the contract, flexibility will matter the most in the programming language. Between the three, Solidity has the most or highest flexibility when compared to Move and Clarity.

Mentioned below is a table that clearly defines the different elements of all the three programming languages and how they have their own feature set.

Solidity, Move and Clarity all are used as languages to create blockchain apps and contracts with their own set of similarities. All three languages are statically typed and have their own set of similarities. Among all the three Clarity might not be the most flexible, however, it does offer a lot of safety. Similarly, based on their features, all the three languages can help the developers create blockchain apps that can cater to the needs of the user