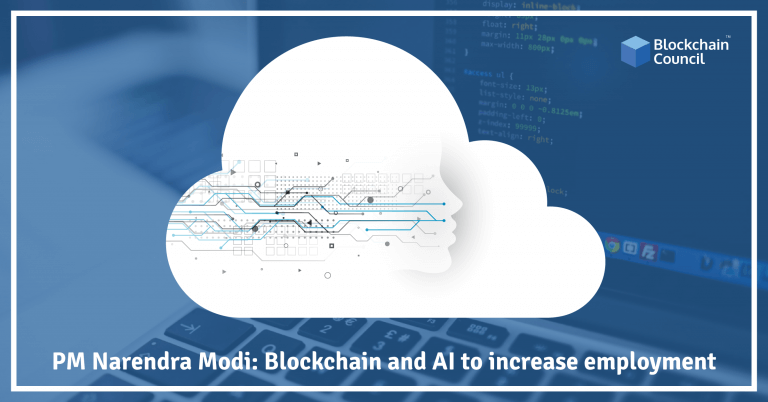 Indian Prime Minister, Narendra Modi has recently expressed positive sentiment regarding the use of emerging technologies such as Blockchain and Artificial Intelligence as being drivers of economic growth. Continued automation and digitisation has led many people to grow fearful of losing their jobs to AI and Machine Learning. However, PM Modi claims that these technologies would not eliminate the need for human employment but would change the nature of the work done. Here we take a look at the various ways in which the World Economic Forum and NITI Aayog plan to use emerging tech for increased employment.

Industry 4.0 to be a Driver for Growth: Modi

Speaking at the launch of the fourth centre for the World Economic Forum in Maharashtra, PM Modi addressed the fear of critics that automation would lead to a decrease in employment. The World Economic Forum is an international organisation that focuses on improving the world’s economic growth by promoting public and private cooperation. The new centre in Maharashtra is the fourth centre after San Francisco in the USA, Tokyo in Japan and Beijing, China which is focused on the “4th industrial revolution.” The fourth industrial revolution refers to the current trend in the industry for the use of automation and data-driven impact in manufacturing technology. It is a broad term that encompasses machine learning, internet of things, big data and other emerging techs. The first three industrial revolutions referred respectively to mechanisation using steam, mass production using electricity and the emergence of computers and the internet.

At the launch event, PM Modi was quoted as saying that, “some people are worried that the advancement of technology will have a negative impact on jobs but the reality is otherwise. Industry 4.0 will touch those aspects which remain untouched so far. It will change the nature of the job and create new opportunities.” Specifically, this set of emerging technologies is expected to increase agricultural yields and make the crops less susceptible to adulteration. Additionally, by embracing these technologies, India could become a global hub for research and implementation in these fields because of India’s demographic potential, fast-growing market size and digital infrastructure. NITI Aayog or the National Institution for Transforming India is the government’s policy think-tank which focuses on developing policies that will lead to long-term and sustainable growth for India by cooperating with various organisations both within the government and from the outside.

PM Modi’s stance on blockchain is coming at a crucial time in India’s development as the government led by his supporters is pushing for a massive digitisation drive in the country. As part of the move, the government is gearing up to connect over 2.5 lakh villages with optic fibre and provide AADHAR benefits to the country’s 132 crore population. Support for Blockchain is also coming at a confusing time for the state of cryptocurrencies in India as the official stance of the Reserve Bank of India remains aversive to nationless cryptocurrencies.

The New Nature of Jobs for Industry 4.0

As PM Modi said, the new economy will undoubtedly create a lot of jobs, but the nature of the jobs will drastically change. For instance, in the last two years, the demand for blockchain engineers has skyrocketed as more and more businesses are beginning to experiment with blockchains. India has one of the most significant numbers of engineers in any country in the world and Industry 4.0 will undoubtedly create a lot of lucrative opportunities for people with relevant technological skills. Some of the most well-paying jobs in the new economy will be concerned with analysis and development. For instance jobs such as industrial data scientists, IoT architects and software engineers will be in high demand. What that means for the future is that only menial tasks which can quickly be relegated to machines will decrease as human beings would be given charge of solving real-world problems which create value for all human beings.

How Blockchain can help you increase your brand value ?
Scroll to top