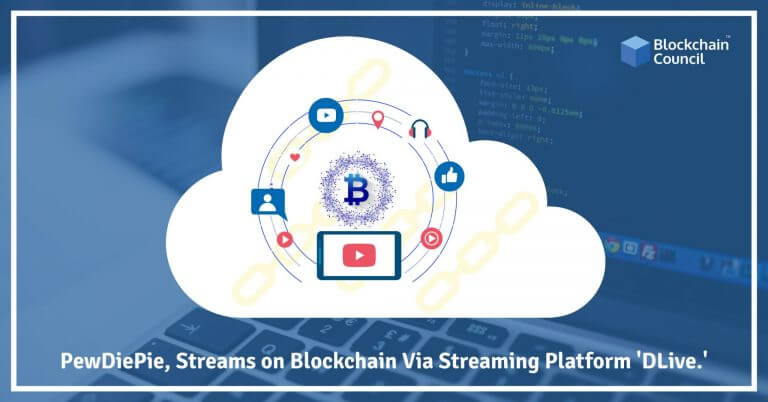 The intervention of Blockchain technology in different fields has become the talk of the town. Apart from big names in the industry, there are many nations which are also contributing to making Blockchain a part of mainstream technology. We have heard about China, USA, UK and other nations which have created a remarkable impact in the field of Blockchain development.

Blockchain finds application in a number of fields, whether it is medical, healthcare, elections, supply chain or even video streaming, Blockchain can be useful in all these segments. Transparency and data security are two factors which most of the companies are trying to explore when it comes to Blockchain implementation. In this blog, I will be highlighting how Blockchain is influencing Youtube. We have already heard a lot about whether or not Blockchain would be a threat to YouTube. Well, we have news unfolding from this domain, PewDiePie which is a popular YouTuber will be coming together with Blockchain. Let us understand how and why.

Before heading to understand why this move has been taken, it is imperative to understand, why there is this paradigm shift towards Blockchain. It is a distributed ledger technology which has decentralization, transparency and peer-to-peer interaction as its underpinnings. The objective of having these features makes it easy for the buyer and seller to directly interact with others without any interference of a third-party. This is beneficial in many ways; it helps in reducing the time of integration, approval, validation, and execution. This can be beneficial for most of the business domains.

One of the common challenges when it comes to video content and its payment is that many a time the creator doesn’t get the dues, and even if they get, the third party platform steals a portion of it. Well, Blockchain can be a probable solution for the same. Since there is no third party involvement, the video creator gets the complete payment in their account without relying on the third party platform.

On the related note, PewDiePie which is YouTube’s most popular individual creator has declared adoption of Blockchain technology.  He is creating a Blockchain based platform DLive —which is a live-streaming video service which promises better economic terms that any other major video platforms.

Felix Kjellberg who is a vlogger-gamer-comedian will be using  DLive exclusively to present weekly live-streams. The official live streaming of this was done on Sunday, April 14th, 2019.

What Is The New Platform All About?

DLive is developed on Lino Network Blockchain-based currency system. Since this is a decentralized platform, it doesn’t take a cut in the money which is generated from live-streaming which is not the case with other live streaming platforms. Amazon’s Twitch which is another live video streaming platform keeps a whopping 50% channel subscription revenue. In addition to this, DLive also rewards other love-streamers. They gives them credit based on the consumption of the content created by them.

Since this is a decentralized platform and there is no commission cut mid-way, it becomes a profitable option to earn money for the live-streamers.

In the first stream, Kjellberg said that PewDiePie would be donating between $10,000 and $50,000 Lino Points to the creators who are live-streaming on this platform. Lino Points are the DLive platform’s currency.  PewDiePie has more than 93 million subscribers on YouTube, and with him taking the decision to come up with this decentralized platform, we can expect a huge number coming on this live streaming platform. This obviously is a challenge for video-streaming companies like YouTube and Netflix. Since D-Live will not take a share in the earning, this will garner more and more attention and live-streaming coming on this platform.

DLive doesn’t take a cut of the video creators’ earning; there are processing fees charged from third-party providers who are associated with the conversion of Lino Points, into actual cash and vice versa. PayPal charges 40 cents per transaction plus 4.4% of the total amount which is used to buy Lino Points.

The future of Blockchain is strong and promising. We have seen its implementation in different businesses, the only reason being that it promises to develop a platform which is transparent that can make any business gain more credibility. This latest move coming from the online video streaming division makes Blockchain as one of the most sought after technology.

How Blockchain Resolves Challenges In The Film Industry
Scroll to top