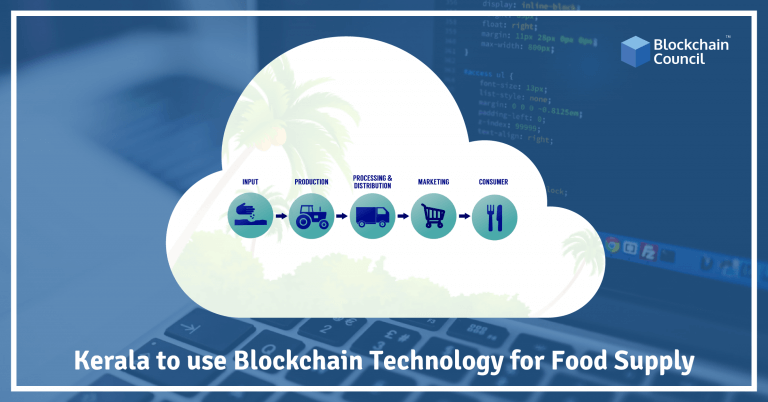 Blockchain Technology has been gaining more widespread adoption ever since investors first took note of the technology in last year’s bull run. Finance and banking are the most obvious applications for Blockchain Technology, closely followed by supply chain logistics. In logistics, blockchains give corporations a plethora of options with regards to shipment data. All inventory could be tracked in real time, and this helps logistics companies to plan for any expected delays due to weather conditions or other reasons. Let’s take a look at how the Indian state of Kerala us using blockchain in logistics to make its food supply more secure.

The state of Kerala is all set to utilise blockchain technology in conjunction with the Internet of Things (IoT) to streamline its supply of milk, vegetable, and fish in the state. The project is being implemented through the Kerala Development and Innovation Strategic Council (K-DISC). K-DISC is the state’s think-tank that was created to formulate and implement plans to create a healthy and sustainable ecosystem with the help of new technologies. In addition to spearheading the new programme to implement the distribution system, K-DISK has also started a curriculum to teach students in Kerala about blockchain technology which will help the state get an early mover’s advantage in the emerging fields of blockchain technology.

For this new distribution system, K-DISK is planning to use separate ID tags for every shipment to track them across the entire supply chain. Every segment of the chain will have RFID (Radio Frequency Identification) tags that are integrated with mobile applications to make the supply data available in real time. This will ensure speedy and high-quality delivery of milk, vegetables and fish in the state and also help reduce food wastage due to slow delivery systems.

Blockchain for Crop Insurance in Kerala

Kerala is also planning to use blockchain for its crop insurance scheme to ensure the tamper-proof and efficient processing and settlement of claims for farmers suffering crop losses. Immutable data on the blockchain can help to judge whether the crop loss was due to natural causes or other factors. Additionally, with Blockchain Technology, the need for third-party representatives is reduced as smart contracts can be used to settle disputes between insurance firms and beneficiaries. Chairman of K-DISC, K M Abraham claims that Blockchain Technology in crop insurance would help avoid time-lag in the assessment and delivery of compensation to farmers who suffer losses due to natural calamities.

Agriculture is the biggest employer in the Indian economy with about 70% of the population of the country involved in agriculture-related jobs. However, agriculture in India is still plagued by basic problems of sourcing, distribution, adulteration and low yields. Prime Minister Modi said in a recent speech that Blockchain Technology can help control this problem by real-time monitoring of supply chain operations. Modi claims that Blockchain Technology can bring in transparency in the agricultural trade, starting from the production process to the final delivery of the product to the farmers. This reduces the scope of corruption through middlemen and could help increase the yield for farmers.

By taking the lead in the adoption of emerging technology to improve efficiency, Kerala is setting an example for the rest of the emerging markets as well. As recently reported, the state of Andhra Pradesh has also been developing its real estate records on the Blockchain. Storing land records and vehicle registration data on the blockchain made the process much more secure and streamlined to the benefit of the populations in this state. Visakhapatnam in Andhra Pradesh is all set to become the first smart cities which will become a world-class technology hub for financial applications because of its willingness to experiment with upcoming technology.

How is Blockchain verifiable by public and yet anonymous?
Scroll to top